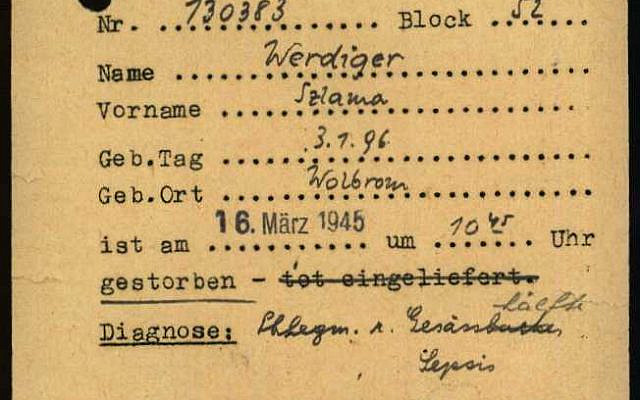 My grandfather died in Buchenwald concentration camp on March 10, 1945, just weeks before his two surviving sons were liberated from that same camp. That was the information my father and uncle had at the time. They said kaddish every year on 25 Adar to mark his yahrzeit, and my father (who was seriously ill during that period and for several years following his liberation) felt deep regret for being unable to sit shivah and grieve his parents appropriately. After he passed away, we continued to say kaddish for his family members on the dates that he observed.

But in May last year, the International Tracing Service (now known as the Arolsen Archives) uploaded more than 13 million documents from Nazi concentration camps, including documentation about my family. My cousin alerted me to new information about our grandfather, which confirmed the correct date of his passing – March 16- 1945, corresponding to 2 Nissan 5705.

With this new information, we were anticipating the opportunity to say kaddish on the correct date for the first time ever, 75 years after his death. This was not of course to minimize in any way the years of kaddish observance by my father and uncle. They acted based on the information that was available at the time. Now, we have more accurate information, and the advice of rabbis was that we should change to the correct date rather than continue their practice.

And then, COVID-19 struck the world.

First the shules closed, and then even the home minyanim that were operating under social distance guidelines were also told to stop. I felt for friends who were in the middle of their kaddish year, several of whom attended the mincha minyan at my office (which has switched to virtual), and the motzei shabbat maariv minyan at our home. And as the date of my grandfather’s yahrzeit approached, I agonized over what to do.

In theory, we could have made an ad-hoc street minyan with just 10 people standing the mandatory 1.5m apart. There were no shortage of people — particularly those (not) saying kaddish – ready to participate. But would that be the right thing to do in the current environment? I discussed the dilemma with one of the local rabbis and eventually reached some clarity. This was not about our desire to say kaddish. Rather, it’s about our desire to follow halacha. And the same halacha that in normal circumstances says I must say kaddish is now telling me I must not. Not “don’t have to” say kaddish. Must not.

So what to do instead? I prepared 10 chapters of mishnayot starting with the letters of his name, and distributed them to the family. On the evening of the yahrzeit, we set up a Zoom call, and invited the family to join. And together, more than a minyan of family members in Australia and Israel joined in. We learned mishnayot and said l’chaim to mark his yahrzeit in a way that was never done before.

In these crazy times, the religious practices that were previously such an integral part of our daily lives have been suddenly disrupted, leaving us feeling lost. But we can innovate while staying true to halacha, and sometimes, we can end up creating new experiences that may in some ways surpass the original ones and bring us closer despite the current wave of physical isolation. Was what we did this year better than saying kaddish? We don’t know. The spiritual effect of our actions on the souls of the departed is beyond us. Perhaps the positives we have discovered from this experience will continue when this virus passes.

May the soul of Shlomo Elimelech ben Yisroel Yitzchok HY”D be elevated, and be a strong advocate for his family and the entire Jewish community.

For more in this series, see Shiva: sitting then getting up, And who before his time, ‘Hamakom’ as a Verb and Transactional Judaism,  Celebrating Liberation without the one Liberated, Kaddish Club 2: chained to the amud, But Who’s Counting,The Long and Short of a Year of Mourning, Second Yahrzeit, Sad vs Tragic, and If I Could Turn Back Time.