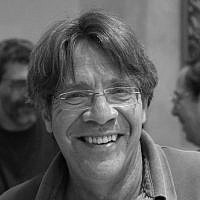 On the fourth day of Chanukah, Volodymyr Zelensky addressed a joint session of the US Congress. After a decade or more of American boomers, like myself, wringing hands and wondering what happened to the America we thought we knew, it was a back to the future moment. There was a political and military hero, speaking to a wall to wall assemblage of bi-partisan, cheering, ovation standing legislators. Zelensky quoted FDR — “in our righteous might, we will win through to absolute victory.” Congress applauded. He alluded to Christmas 1944 and the brave American soldiers who held the line at the Battle of the Bulge. The representatives and senators went wild. Pundits compared him to the last head of state to address a joint session: Churchill.

Wait, I thought, wasn’t the last such leader to address Congress one Bibi Netanyahu, making his cringeworthy, glib, faux avuncular appeal to block Obama’s Iran deal? Even Zelensky condemning Iran as a terrorist state didn’t elicit any recollection of Netanyahu’s grandstanding. Well, that’s probably just as well. Perhaps Zelesnsky was hinting at Israel when he said that if Putin and Iran are not stopped, American allies will be next, again eliciting a big applause. Fine, it doesn’t always have to be about Israel and if Iran gets stopped because it teamed up with Russia in Ukraine, and not because of threats to eliminate the Zionist entity, well then, as the sages say, “the work of the righteous is done by others.”

But still, I’m sitting in Yafo on the fourth day of Chanukah wondering, how did Zelensky, who is Jewish, miss the opportunity to recall the battle of the few Maccabees against the many Selucid Greeks? What about the miracles of the candles and the festival of lights similar to Ukranians fighting for freedom despite Russia destroying their electricity grid? How come Zelensky alluded to Christmas so many times and ignored Chanukah? Maybe Chabad and the Jewish Agency aren’t doing such a good job in Ukraine. And how many American Jews would make the connection? Look how readily Americans accepted the notion that, as Zelensky said, “aid to Ukraine is not charity, it’s an investment!” How long since Israel could make the same claim without arousing cynicism?

You know what? Better that, for once, it’s not about Jews. Better that nobody jumps on the notion that Zelensky acts the way he does, says the things he does, fights the way he fights, because the Jews are behind it. Great that we can sit this one out. Thank heavens nobody recalled Bibi. If Zelensky can gain international censure of Iran, great. If a Jewish Ukranian President doesn’t mention Chanukah, who cares? Enjoy the break; tomorrow there will be plenty of antisemitism, New York Times editorials mourning the death of the Israel they once knew, and the latest grotesque Israeli governing coalition to deal with.