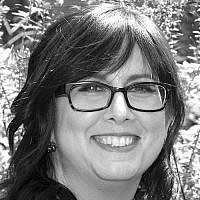 The Blogs
Shani Bechhofer
Apply for a Blog
Advertisement
Please note that the posts on The Blogs are contributed by third parties. The opinions, facts and any media content in them are presented solely by the authors, and neither The Times of Israel nor its partners assume any responsibility for them. Please contact us in case of abuse. In case of abuse,
Report this post. 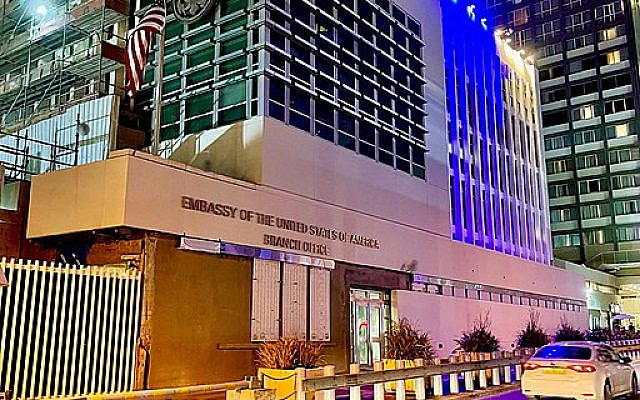 US embassy, branch office, in Tel Aviv, lit with the colors of the Ukrainian flag. (Wikimedia Commons)

Some have expressed their deep discomfort about valorizing the people of Ukraine in this war, given the long history and remaining embers of Ukrainian antisemitism. These emotions have been particularly well articulated in several columns written by emigres from Ukraine. They are understandable.

I do not understand or accept, however, the theological, philosophical, or political wavering. To that hand-wringing I respond: Let me make this easier for you.

This is not about Ukraine per se, it is about Putin’s naked aggression. It is about the injustice of “might makes right,” a belief that Hitler championed overtly. It is about exposing the lies of the bully rather than passively emboldening him and others like him.

Ukraine is certainly imperfect. It has not yet fully freed itself of that endemic corruption that flourished under Soviet rule and under Putin’s kleptocratic regime and the overlord he installed. It has not cleansed itself of bigotries or fully confronted the very dark sides of its long history. But it is a sovereign state with a democratically elected government. Putin has concocted against that government accusations with no factual basis as a pretext to create the veneer of a justification for his indefensible attack. In truth, there is neither Ukrainian belligerence nor a threat against which Russia needs to defend itself to justify this war.

People of good will stand with Ukraine against Russia today. We praise its people, because they have made this decision of their own volition – that if Ukraine falls, it will not be as yet another domino bringing others down with them, but on their own terms, resisting in their own voice, without cowardice or complicity. We praise them because, having chosen the path of democracy and liberty, they are utterly unwilling to abandon it, to scurry back to the protection of Mother Russia’s smothering embrace and participate in rebuilding a repressive empire. We remember that ruthless Russian empire, whether Czarist or Communist, and we know that it must not be reconstituted under the leadership of a KGB-trained dictator. We cheer on the Ukrainians who are fighting against that dictator, thus exposing to the world his calculated lies, his amorality, his army’s tactics and weaknesses, his expansionist ambitions, and possibly his eroding rational judgment.

Here I quote from the clear words of the representative of Albania to the United Nations, spoken at the Security Council meeting on the night of February 23, 2022 before Russia’s invasion:

Every development of the last 48 hours confirms to us and to the world that Russian worries have nothing to do with its security; that its anxieties are not linked to NATO enlargement; that this issue is not a confrontation between Russia and the West.

The Ukrainians are facing another aggression just because they dare to exist, because they have chosen to be independent, because they have opted for democracy. This is a dark hour not only for Ukraine but for the entire international community as we witness with trepidation the progression of a pure act of aggression, carefully planned and cold-bloodedly being executed.

At this most critical moment, we stand firm for their right to be free and to choose who they want to be.

There is no moral ambiguity in this situation. We no longer live in a world in which one nation may simply gobble up its weaker neighbor, thankfully. Russia’s unprovoked military aggression and territorial ambitions are bringing fear, suffering, and death to millions. This is not genius, it is not savvy, it is not deserving of any sort of respect. This is evil and if unchecked, this sort of lawlessness threatens to make the world a far more dangerous place for everyone.

How long can you hover over both banks of the river? Choose a side and please don’t waffle (publicly). Nobody is asking you to declare Ukraine to be the bastion of all virtue. What this moment does demand is clarity about right and wrong. Root for the people who want to live in peace. Root against the ruthless dictator who sent his soldiers to kill them, quash any opposition, and install his puppet to govern them against their will. If “rooting” is not your thing, try this: Refrain from justifying the aggression of a bully because you think the bully might favor you, or because the bully’s friends donated a lot of money to your cause, or because the victim’s grandparents were bad, or because the enemy of your enemy is your friend. Don’t be distracted by arguments about politics or about who should have done what, if these blur your vision. Let us cultivate in our hearts compassion for human beings who are terrified, uprooted, and in danger. Let’s cultivate in our souls rejection of injustice, aggression, and bullying.

About the Author
Dr. Shani Bechhofer is an independent Jewish education consultant and researcher in Monsey, NY. In addition to working with schools on strategic leadership, training and coaching principals, evaluating agency and foundation programs, and researching the Bais Yaakov movement, she is a local community advocate for good government and intercultural dialogue in Ramapo, NY.
Related Topics
Related Posts
Comments