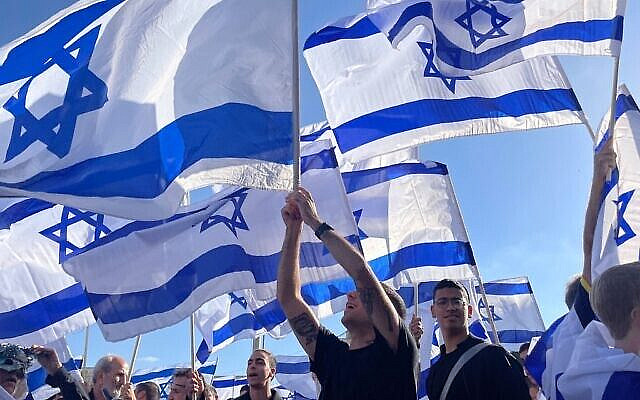 Celebrating Yom HaAtzmaut — Israel Independence Day — never gets old for many reasons, but primarily because it seems that every day we are reminded of how different Jewish life is because of the existence of the Jewish state.

Coming on the heels of Yom HaShoah — Holocaust Remembrance Day — we remember the depths that the Jewish people had reached with the murder of six million Jews and the hope that the rebirth of Jewish sovereignty in their historic homeland offered the Jewish people at their nadir.

On the occasion of Israel’s 74th anniversary as an independent nation, what is particularly striking is that never has there been running parallel to each other such radically different tracks regarding the Jewish state.

On the one hand, more and more Arab states are abandoning the historic rejection of Israel and welcoming it into the Middle Eastern family of nations.

Not only is this happening on an official governmental level, but through people-to-people relationships as well, with broader social and institutional ones cropping up almost on a daily basis. Trade, cultural exchanges, joint ventures, educational programs — all largely missing from the cold peaces over the years with Egypt and Jordan — are hallmarks of the new normalization.

A few weeks ago, six foreign ministers, including from Egypt, the UAE, Bahrain, Morocco, Sudan and Israel met in all places in Sde Boker, the home of Israel’s first prime minister, David Ben Gurion. This was an unthinkable development only two years ago, and the fact that it was hardly commented upon shows you how “normalized” such meetings have become.

This is a revolution in regional developments and in Israel’s standing in the region, a recognition that the Jewish people have a long history and belong to the region. And it is largely happening without over-the-top rhetoric and pronouncements.

At the same time, we are witnessing an explosive heating up of anti-Israel activity among international groups and among activists around the world, including in the United States.

Groups like Amnesty International, Human Rights Watch, the UN Human Rights Council, all institutions with long histories of bias against Israel, have raised their attacks against the Jewish state to new levels. Amnesty’s recent report was notable for its move to delegitimize Israel in its very founding, leaving the clear impression that a Jewish state by its very existence is racist and illegitimate.

There are several factors playing into this surge in anti-Israel hostility and in the qualitative difference between groups formerly condemning Israeli activity and now delegitimizing the state itself.

On one level, it is no mere coincidence that these two parallel tracks are appearing at the same time. For forces that have been hostile to Israel for a long time, the emergence of the Abraham Accords and the extensive Arab normalization of relations with Israel is a threatening development. How to justify negativity toward Israel when the Arabs themselves, longtime enemies of the Jewish state, are now accepting and relating to it?

The answer is to go to another level of rejection of Israel, now delegitimizing the state in its very origins or accusing it of war crimes. They are, in effect, spoilers against the constructive path of the Abraham Accords. We have seen such spoilers in the past, most notably after the Oslo Accords in the 1990s which offered a path toward reconciliation between Israel and the Palestinians. Palestinian suicide bombers launched a series of attacks within Israel to derail any hope of progress.

Second, there are those who worry that the Abraham Accords will marginalize the Palestinians, so this turning against Israel, as illegitimate as it is, is an effort to refocus attention on the Palestinians.

Making progress on the Palestinian issue should be important to Israel to ensure it remains both a Jewish and democratic state. Failure to achieve progress, about which responsibility is widespread, should not be used as an excuse to vilify Israel.

Finally, it reflects some of the trends in left-wing circles these days, where the world is seen as consisting of the oppressors and the oppressed, with little room for nuance or a non-ideological approach. In that context, inevitably, Israelis are portrayed as the oppressor, the Palestinians, the oppressed.