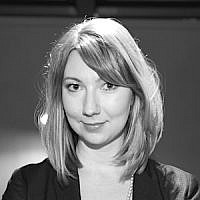 The Blogs
Klaudia Klimek
Apply for a Blog
Advertisement
Please note that the posts on The Blogs are contributed by third parties. The opinions, facts and any media content in them are presented solely by the authors, and neither The Times of Israel nor its partners assume any responsibility for them. Please contact us in case of abuse. In case of abuse,
Report this post.

On February 24, 2022, the world my generation grew up in ended. The world of development, peace, democratic rules and values has changed into a world of war, anxiety, fear for tomorrow. Every day, we are bombarded on TV or in newspapers, and even more so in social media, with pictures from Ukraine or the Polish-Ukrainian border, where war refugees, in their hundreds, cross the borders of Poland and the European Union every day. The current war in Ukraine has a sad face of a woman and a child. A woman who left her country and her husband, a child who left her home. However, nothing can express this suffering, these dilemmas, questions and decisions about the next day as well as a direct confrontation with all these feelings and people, who carry these emotions instead of luggage across the Polish border.

I was born in Poland, in Cracow, the beautiful “city of kings”, which for years has been called the European capital of culture. Now, however, it seems that it is, together with Warsaw, the European reception point for refugees. Since the beginning of the war, more than 2 million refugees have entered Poland in the first 14 days. Never in European history has there been such a sudden and massive wave of refugees to one place. The Poles have coped extremely well. There are no refugee camps in Poland, as all of them have found safe shelter in the private homes of Poles. NGOs on the border have set up reception points where Ukrainians can get warm, eat something and rest before continuing their journey. They cross the border on foot or by car or train. However, each journey takes from 10 to 40 hours. By the time they reach the reception points mainly women with children are exhausted. But they cannot stay at the station, they continue their journey. Another train, another hour … and they arrive in Krakow or Warsaw. To cities which may be just another transfer point for them or maybe their final destination? Nobody knows this until they wake up in the morning and decide.

Currently I live in Brussels, in Krakow, apart from my family, I have my own Jewish community. I am the president of the Cracow branch of the Social and Cultural Association of Jews in Poland (TSKŻ) as well as the president of my own Jewrnalism Foundation. That is why I visit Poland at least once a month. When I saw the pictures from the train station in Kraków and the crowds of women and children huddled together on the ground, I knew that I wanted to do something about it. My one help is a drop in an ocean of need. But from these drops a wave of help from Poles has formed, so great, that even the actions of the current government would not be able to match it. And then came a newsletter, and in it came a solution as well as inspiration. My Community announced the Ukraine Emergency Response Grant Program. I didn’t think long about my project, I knew how it wanted to help. I want to provide a safe temporary roof over the heads of refugees from the Krakow train station. So I filled out a short form, asked for the highest amount of $5,000 and committed to accommodate the visitors in hotels in Krakow. My goal was to accommodate 250 people for one night or 125 for two nights. After two days I got a positive answer. The whole amount was already on its way to my account. It took two days from the idea to getting the money. On the third day I could act. Of course it was not without obstacles. All the hostels in Krakow were already occupied and I was afraid of hotel prices because the higher the price, the less people can stay overnight. But even here it turned out that people’s hearts are bigger than their desire to get rich. Hotel Klezmer Hois, Rafal Romanowski from Loretanska 6 Apartments as well as Hotel Camea agreed to make their elegant rooms available for the price of a hostel bed.

We could start the action, now only the logistics. And this is where friendships from high school come in handy. In an hour we managed to create a group of people who were ready to go to the train station, select people, take their luggage, transport them by cars to designated places… and so on several times.

In less than a week we have already helped 45 refugees. In two weeks we have already accommodated 89 people for 2, 3 or 4 nights. By the time you read this article, 140 people will have already slept peacefully. We will end with this number because our finances have run out. During the Purim party we collected gifts of hygiene products, clothes and toys to offer them not only a roof over their heads but also some dignity and a smile.

The question is whether such help makes sense. If it is a drop in an ocean of needs. It does! Because it is real help for real people! It is also helping myself and my Jewish nation. Because in a few decades, when I will have the privilege to have grandchildren, who may one day come to me and ask what you were doing when Russia attacked Ukraine, I will be able to say that I helped. I will be able to look in the mirror with peace of mind, I will be able to set an example for the next generation. That Tikun Olam is not an empty phrase but daily work on the world around us. That it is worth being decent. I want to prove them that Jewish tradition is a living thing!

If they want to know more, I will sit down and tell them about a family from Kharkiv, who did not leave their hotel room for four days because they had been hiding in the subway for two weeks during the bombing. I will tell them about a mother with three teenagers who was afraid to trust me because she had already heard about cases of human trafficking and when she decided to get in the car she started to cry out of nervousness. I will tell them about a family of seven who, upon entering a beautiful apartment in the center of Krakow, were stunned because they had never slept in such a nice place. If you want to see it all with your own eyes, go and help, and if you can’t, then support those who do. My foundation does not organize fundraising for this purpose and this is not our main activity. The activities of my foundation are focused on the promotion of Jewish culture through education, culture and music, but if you want to support it, we will not refuse, we will accept help and then go to the railway station and help the family from Odessa, Kiev …

About the Author
Klaudia Klimek is the founder of the Jewrnalism Foundation. For the past ten years, she has been deeply involved in working for the Jewish community in Krakow and in Poland in general. She is a sociologist who analyzes and a dreamer who aspires to change the image of Europe’s Jewish communities. After being involved in many projects, Klaudia finally found her niche by promoting young European Jews and their work. She is a member of many Jewish Polish organizations, President of the Social and Cultural Association of Jews in Poland in Krakow. She is a Fellow of the Paideia Project Incubator 2011 and the Minyanim Program. Currently working in the field of polish politics.
Related Topics
Related Posts
Comments