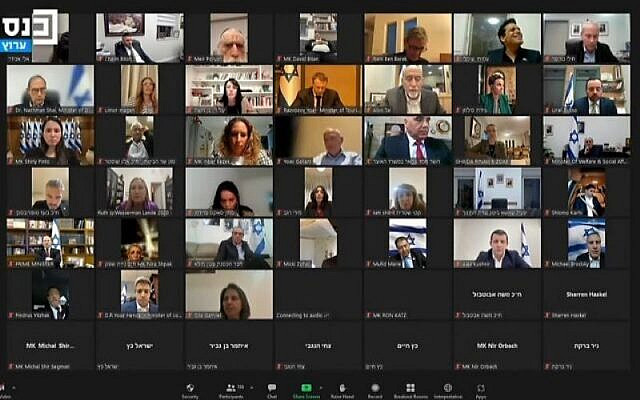 Ukrainian President Zelensky has been waging a masterful campaign against the Russians not only in the field but also in the realm of public opinion.  It was therefore surprising to witness his slip on Sunday when, in an address to Israeli lawmakers, he compared the Russian onslaught to the Holocaust.  A savvy politician, Zelensky should have known that the comparison would not go down well with his Israeli audience.  Prime Minister Bennett was harshest in his criticism, saying that “it is forbidden to compare anything to the Holocaust.” “Forbidden” may be pushing it, but it is hard to argue that any of the horrendous atrocities perpetrated around the world since World War II compare to the calculated, methodical industry of death operated by the Third Reich.

Unfortunately, Zelensky’s Holocaust remarks diverted attention from the crux of his message, which is that there is no room for neutrality when faced with a clash “between good and evil.” In that he is correct. To answer Zelensky’s question, Israel’s failure to take a stand is not a sign of indifference but rather a misguided assessment of its strategic interests and a failure to give morality the weight it deserves in international relations.

Bennett may think he’s carving out a place on the world stage by cozying up to Putin and serving as his carrier pigeon, but it’s hard to lend credibility to the mediation efforts and compromise proposals of the leader of a country who refuses to engage in negotiations with his Palestinian neighbors to end a 75-year-old conflict driven by issues of territory, sovereignty, and nationalism that also characterize Russia’s unfounded claims to Ukraine.

Strategic Interests and the Refugee Issue

As far as strategic interests are concerned, there is no question that while Israel needs to look out for itself, when it comes to allies, it has and should continue to harness its security to the American eagle rather than the Russian bear. The tyrannical Russian president is guided by only one consideration – his personal and global ambitions – and that is what will determine his policy toward Israeli Air Force activity in Syrian airspace. Israel should be more concerned about the bad seeds it is planting in its relations with the United States. As the war rages on and the world witnesses the unrestrained slaughter of innocent civilians and the displacement of millions of refugees, both pragmatism and, more importantly, decency will demand that Israel join its trusted allies in the Western world in their support of Ukraine and their moves to strangle the Russian economy until Moscow abandons its expansionist aspirations. Failure to do so will not only leave Israel on the wrong side of history but will also place it on the wrong side of the burgeoning alliance between the United States and Europe.

As for the refugee issue, the disgraceful policy set by Interior Minister Ayelet Shaked, which discriminates between Jews and non-Jews and caps the number that Israel is ready to accept at a nominal figure that won’t, God forbid, threaten to taint the purity of the Jewish people, lays bare the “Jewish state” at its ugliest.  Applying demographic concerns in the light of this humanitarian crisis amounts to racism, pure and simple. Just imagine how the State of Israel, which screams “antisemitism!” when a foreigner says they don’t like Osem spaghetti noodles, would react to a European country turning Jewish asylum seekers away because they pose a demographic threat. The demographic devil is so ingrained in our discourse, however, that the Israeli public has become immune to the inherent discrimination in the concept itself.

Meretz Faces a Moment of Truth

Many have written about Israel’s errant policies since the outbreak of the hostilities, and criticism has come from members of the coalition as well. Short of a Supreme Court ruling that might put paid to Shaked’s restrictions on the absorption of refugees, however, there are no signs that any change is in the air. This critical juncture, when it appears as though Israel may fail to prove itself worthy of a place on the right side of the realignment that is taking place in the world, constitutes a moment of truth for the Meretz party.

A few weeks ago, in advance of the Knesset vote on the wretched, discriminatory “Citizenship Law,” Meretz Chair Nitzan Horowitz promised a “strong and painful response” if Shaked went ahead with plans to pass what Horowitz called “a law that has no place in a democracy.” Unperturbed, Shaked went ahead with the vote, and the bill was passed into law by leaning on the support of the right-wing opposition.

With the government’s moral ambiguity and racist underpinnings being exposed in the harsh light of the Ukraine-Russia crisis, now is the time for Meretz to make good on its promise to exact a high price for Shaked’s failure to honor the agreements with the left flank of the government. No amount of posts and tweets by Horowitz, Meretz MKs such as Mossi Raz, and even revered party elder Zehava Galon will succeed in convincing Bennet and Shaked about the need for unequivocal and active support of Ukraine and an open policy of refugee absorption that pays no heed to the question of “affiliation to Israel.” On the other hand, a declaration that Meretz will quit the coalition if it doesn’t reverse course and if Shaked is not removed from the Interior Ministry is likely to have the desired effect. And if it doesn’t, Meretz’s conclusion must be that its days of bending over backwards to keep the government afloat are over. Yes, Bibi or no, Bibi, can Meretz continue to find any justification for accompanying the right-wing coalition members down the shameful path the government is taking? As President Zelensky said to the MKs, “you will have to live with the answer.”