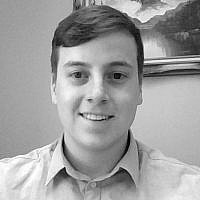 The Blogs
Tom Ross
Apply for a Blog
Please note that the posts on The Blogs are contributed by third parties. The opinions, facts and any media content in them are presented solely by the authors, and neither The Times of Israel nor its partners assume any responsibility for them. Please contact us in case of abuse. In case of abuse,
Report this post.

After participating on a Birthright Israel trip this past summer with Canada Israel Experience, I am taken aback by some of the commentary and criticism that has recently been directed towards the program.

There are always going to be critics when it comes to Jewish community programs, and certainly Birthright Israel (like any program) can be improved. But much of the negative rhetoric against Birthright Israel just doesn’t reflect reality.

Specifically, the allegation that Birthright Israel in any way limits critical thinking on Israeli politics or the Israeli-Palestinian conflict simply doesn’t match my experience. To me, that criticism sounds like it is likely driven more by a narrow political agenda – which seems to be obsessed with Israel’s faults, real and imagined – rather than any actual shortcomings on the part of Birthright Israel

I say this as someone who, just this year, participated in the Young Professionals Canada Israel Experience Birthright Israel trip. I went on my own, with an open and mind and with no real expectations for the trip. In fact, I was primarily looking forward to visiting my sister, who moved to Tel Aviv after I took her on a business trip to Israel in February of 2017.

I did have some background information on Israel from what I had read in the news prior to departure. Once the trip began, I was (pleasantly) surprised by the amount of unbiased, balanced, and nuanced information the guide offered about the geopolitical situation and the history of the country.

Our tour guide had a wealth of information and was always ready to engage with us on complex issues. In fact, he repeatedly told us not to believe him, to look up information to confirm its truth, and to form our own opinions about the topics at hand. And our trip leaders encouraged us to be inquisitive, to ask questions, and to make the most of the experience.

It was fascinating to hear diverse perspectives on everything from Jewish identity to Israel’s connection with the Diaspora to the conflict between Israelis and Palestinians. The atmosphere was one of learning and openness designed to make us feel comfortable about asking questions and raising issues.

Additionally, the opportunity to spend time with young Israelis allowed us unfiltered access to people in the same stage of life. We asked them about everything from their army service to university life to the challenges of living in what is (by Canadian standards) a very difficult part of the world. These one-on-one conversations, perhaps more than anything on the trip, revealed the complex situations our peers in Israel face and the diversity of viewpoints among Israelis.

It is simplistic to view Israelis as one-dimensional or black-and-white. Thanks to Birthright Israel and Canada Israel Experience, I saw firsthand this is a society that is incredibly reflective and intensely conversational. Israel, like any other country, is flawed – and Israel’s flaws come under a media microscope more often than most countries. But those shortcomings should not overshadow the fact that Israeli society cares passionately, thinks deeply, debates and decides democratically, and wants to build a better life for its people and its neighbours.

Any trip to a foreign country packed with such a large amount of information requires processing that one cannot fully complete in just two weeks. But as I reflect on the trip, I realize that it has left me better informed about and more capable of drawing my own conclusions on Israel. It has also made me grateful that our community operates such an incredible operation that allows young people like me to learn about our Jewish history and culture, and by doing so enrich our identities.

On the difficult political issues of the day, I now have a better grasp of the complexities and reasoning behind many of the decisions that might be hard to understand from the security and comfort of Canada. I realized that I don’t have to be proud of every single Israeli government decision to be proud of Israel and the Israeli people.

And after attending Birthright Israel, I am prouder than ever.

About the Author
Tom Ross administers federal grant funding in Canada and is involved in a number of start-ups, mainly in the clean aggrotech industry.
Related Topics
Related Posts
Comments