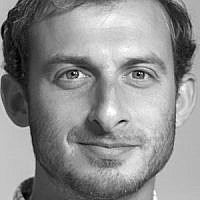 The Blogs
Benjamin Marks
Apply for a Blog
Please note that the posts on The Blogs are contributed by third parties. The opinions, facts and any media content in them are presented solely by the authors, and neither The Times of Israel nor its partners assume any responsibility for them. Please contact us in case of abuse. In case of abuse,
Report this post.

Comedy Central have just announced that they want to do a roast of Harvey Weinstein. But they are having trouble enlisting comedians to roast him, because they all want to be actors.

Hollywood are planning a Harvey Weinstein biopic. They brainstormed for a title that would most accurately represent his shameless selfishness: they finally deciding on calling it Harvey Weinstein. To play Weinstein as a little boy they have cast Woody Allen.

There is concern that a film about the film industry is a bit incestuous, even if it’s not keeping it in-house.

This scandal goes to show that good looks are important. It has given fat ugly people a bad name. They may never recover. At least it was good to hear that they regularly shower, even if they do need help scrubbing.

Call me old-fashioned, but I’d rather be a fly on the wall than a potted plant.

The main complaint of the actresses was that he wanted the attention.

The French have responded to the widespread criticism of Harvey Weinstein by celebrating him as an auteur. I guess he must be on the spectrum. He was no mere voyeur.

Maybe Harvey Weinstein just got confused: star fucker with staff fucker, being an exhibitor with being an exhibitionist, and breaking the fourth wall with violating it. Maybe he misunderstood the old adage that show business is two words.

The Weinstein Company have said that Harvey Weinstein will no longer be involved in casting. He is an outcast.

Harvey Weinstein has issued a short press release responding to all the negative publicity. It reads: “Everyone’s a critic!”

He issued a follow-up press release: “Now they come forward.”

It’s so brave that everyone is now coming forward to criticise Harvey Weinstein. It’s great that the scandal has got out. Otherwise people might think the problem was only with uncles, parents, priests and rabbis.

They say that Weinstein’s behaviour has long been gossiped. But not in the entertainment industry gossip magazines. Evidently those in the gossip magazine and film industries are better disciplined than we give them credit for.

There’s a Harvey Weinstein sex tape online. No one wants to watch it.

The Weinstein Company are going to change their name to The Company. Bob Weinstein is going to shorten his name to: Bob. Or, maybe he will change his name to Albert W. Brooks. (The less people understand that, the more effective the name change would be.)

Harvey Weinstein is in demand on the corporate speaking circuit to talk about work-life balance. He has agreed to donate 10% of his speaking fee to actresses he has abused. He thinks paying for it will make it better.

Harvey Weinstein’s daughters are very progressive, but when they get married I don’t think they’ll be keeping their maiden name. It must be hard for them: they’ll end up with his money but not his name. If they still want a father figure, they could try Anthony Weiner.

The elephant in the room is that Harvey Weinstein is Jewish, although apparently he wasn’t hung that well.

On the bright side, at least Harvey Weinstein is not gay. (Because, if he was gay, he’d give gays a bad name.)

Benjamin Marks previously questioned looking to the film industry for moral guidance in “Preventing the stereotype that Jews are often late,” The Times of Israel, October 25, 2017.

About the Author
Benjamin has never ghostwritten for anyone. Specialising in one-liners, his CV is a one-liner.
Related Topics
Related Posts
Comments
Advertisement