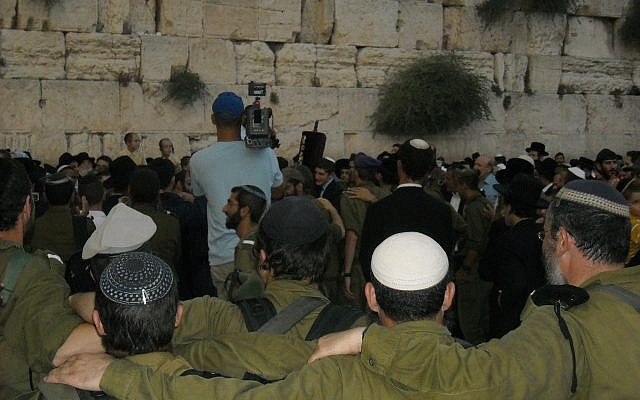 As we read through Yaakov’s blessings to his children, Gad’s bracha stands out as a tongue twister (Breisheet 49:19):

Gad will recruit a regiment and it will retreat on its heel.

According to Rashi the words “yegudenu” and “yagud” are all related to the word “gdud” meaning troops will troop out from him signifying that the tribe of Gad will cross the Jordan with their brothers to wage war, all being armed and they will remain with them until the land will be captured. All their troops will return in their own track to their territory which they took on the other side of the Jordan and not a single person will be missing.

Rashbam, Rashi’s grandson explains that the troops of the entire nation of Israel will follow Gad who is the vanguard in the wars of conquest as we know from Dvarim 3:18 where Moses charged them with this task: “Cross over in the forefront, ahead of your brothers, B’nai Yisrael, all that are fit for the war.” On the return from battle, this tribe, instead of being in the vanguard, will be the rearguard, again the most exposed to enemy action. They will thus form a buffer for the Jewish armies at all times.

At the end of Sefer Dvarim in Vezot HaBracha, Dvarim 33:20-21, Moshe blessed the tribe of Gad:

Blessed is the One who broadens Gad…He marched at the head of the people, he acted righteously before God and his laws with Yisrael.

Rashi teaches that the breadth of Gad’s border (which was bordered on the west by the Jordan River) ranged eastward. The tribe of Gad was at the head of the people since they marched at the front ranks of the armed forces when the land was conquered, since they were great warriors as it is said (Yehoshua 1:14) “You shall cross as the armed forces before your brothers.”

Rashi concludes that the tribe of Gad acted righteously before God as they were faithful to their word, and kept their promise to cross the Jordan until they conquered and distributed the land.

Throughout the Tanach, the word gdud refers to our battalions as well to the enemy battalions.

In the Israeli army today, the word gdud, battalion, meaning a group of fighters in a section made up of a few platoons is still used. Each gdud has its own name or number.

Our soldiers today are doing no less than what the tribe of Gad did while B’nai Yisrael were conquering the land. They are on the front lines on all of Israel’s borders as well as in Judea, Samaia and Gaza. May our soldiers be blessed with Gad’s bracha that they all return home safely and unharmed.