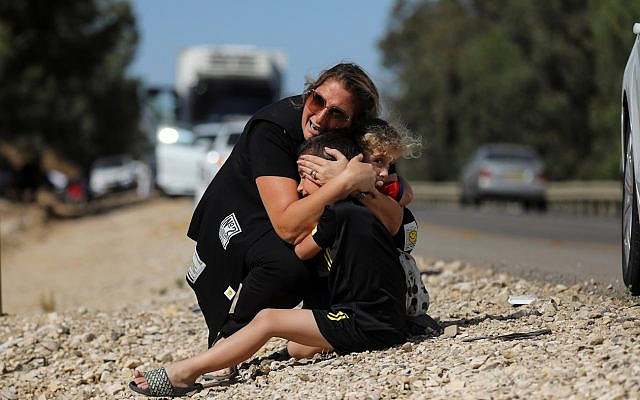 A woman protects her children as sirens sound following rocket launched from the Gaza Strip towards Israel near Sderot, Israel May 19, 2021. REUTERS/Ammar Awad

On the frontline fighting terrorists, on the streets facing rioters with guns and Molotov cocktails, and in the bomb shelters with our children, women are the inadvertent guardians of the walls. They are anxious about their children and their husbands; they cringe at the sound of sirens as they search frantically for their children. They know they have seconds before the rockets land. Our guardians’ hearts are breaking over our house, which is set aflame by hatred.

Women, mature and caring, are far more responsible than men. They should lead the call for reason. They should not keep silent at this time. If they only realized their paramount significance to society, and on what our future depends, they would not rest until they made us, men, reroute and take the right track forward.

The fate of our country and the fate of the world depend on good connections within the people of Israel, and only on that. The ancient Hebrews formed a unique nation with a unique role in the human mosaic. It was founded by people from all the nations that existed in the ancient world, who joined together to create a united nation based on love of others and mutual responsibility. The people of Israel established the first working model of a small-scale world peace. It was shaped as a sample for how full-scale world peace would unfold.

But the people of Israel fell out of love with one another and succumbed to the hatred that percolated from their untamed hearts. They stopped being a role model nation and forgot their duty to humanity. Now, who, better than women, can restore these connections and reestablish the unity? Who, better than women, knows the value of mutual responsibility and love of others?

Because our ancient root comprises all the nations, every step we, Jews, make toward each other brings the whole world closer. Every time we rise above differences between Right and Left, Orthodox and secular, Ashkenazi and Sephardi, we “disarm” hatred everywhere, and the world recognizes our contribution and responds favorably toward the people of Israel and the State of Israel.

Conversely, every time we sink into hatred and division, the world, too, sinks into conflict, and senses that it’s coming from the Jews and from the Jewish state. This is why the world is always examining the State of Israel and always judges it.

Because of it, our women, who know the value of unity, can help us rise above our differences, unite our society, and in the process, unite the world. They do not need pretentious headlines or overbearing politicians to lead them; they need to treat our society the way only they know how: like loving mothers.

I sincerely hope that our women will not succumb to propagandists and lobbyists, that they will not be influenced by inciting discourse in the Israeli society, but rather show us, men, how to bring peace and security to our country and to the world: through unity above differences.