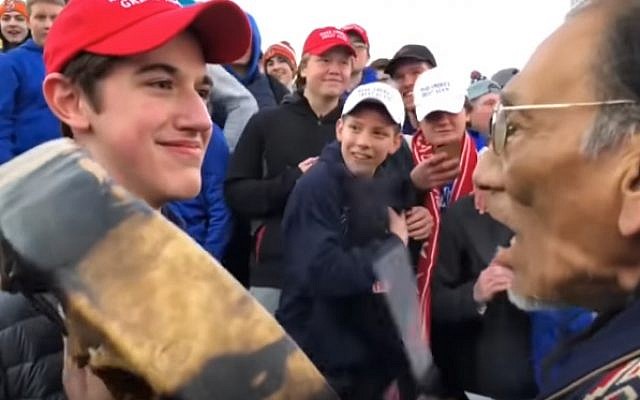 I was awakened this morning to pictures of American teenagers mocking a Native American elder.  The youth from a religious high school in Kentucky were wearing MAGA hats (Make America Great Again) and grins. The horror of this image is haunting. The elder “statesman”, Nathan Phillips of the Omaha Nation and a Vietnam veteran, was trying to come between opposing demonstrating anti and pro abortion groups, including the MAGA youth, to try to calm things down.  The result was horrific (see video below).  One must point fingers.  Such a scene was inconceivable two or three years ago. It is a direct outcome of what Donald J. Trump has built for us in America: walls around the heart, and a new generation of youth filled with hatred and prejudice. Apparently this is now our future.  If Trump’s goal has been to create the seeds of an passionate super-organized youth movement, he has succeeded.  The coldness, obstinance and mockery of these youth chill us to the bone.  One gets the sense that such scenes are now more frequent, and like the climate, it may be too late!  Many of us who are educators (I was for over 40 years) know that the seeds of hatred have already been sown.  Trump’s America is a nightmare that all those concerned for freedom must now awaken to, for in our tacit silence we have each let the beast grow and prosper.  My gut response this morning was to buy a ticket to the good ole USA and volunteer to teach, but I look around me and see blind hatred perpetrated here in our very midst.  This is a world wide problem.  Even if the Catholic Diocese affiliated with Covington Catholic High School punishes  the protagonists (one, two, three? how many?), this incitement had the markings “mob” violence, a group participation in mockery and vile hatred echoed on the faces of teenage youth.  Such hatred will take decades, if ever, to reverse.

Coda: since this posting was written other information has come to light.  The youth group in question had not formally convened; at one point a small group of “Black Hebrews” started taunting a few Covington youth standing nearby.   Little by little the Covington youth group converged. They all WERE wearing MAGA caps and had been in the area demonstrating for pro-life groups.   The verbal exchanges by the Black Hebrews were extreme and insulting.  The youth group then got permission from their teacher/leader to begin chanting school chants.  The atmosphere became “hot and heavy”.  Nearby some Native Americans had been demonstrating about rights of indigenous peoples.  One of them, Nathan Phillips took upon himself to try to defuse the situation.  He did this by chanting and drumming.  He had a clear path he was walking, and the people around (including the youth) stepped aside to let him through, except for ONE youth, Nick Sandman, who “held his ground” in defiance. He would NOT let Mr. Phillips pass.  In the background the youth started to mock and make fun of Mr. Phillips.   It was at this point that the video that went viral was taken.  The claim that Nick Sandman was totally “innocent” is false.  He was to blame for blocking the elderly.  Also the expression on his face is questionable; it can easily be interpreted as lack of respect and mockery.  But that is for “gesture experts” to analyze.  25.1.19

Where can I channel my outrage?  Have our leaders become so impotent in addressing the most urgent crises in education and moral leadership ever to face our society?  The United States Congress must show bravery and act to combat the sinister culture of lies and hatred of Donald J. Trump.  Here in Israel, in our own midst, we have a Prime Minister who openly declares that if indicted for serious crimes, he will still continue, like the horse with the blinders, to run in the next election.

The central problem: our leaders ARE models for our youth, often more than teachers or parents.   Here in Jerusalem, we are puzzled by an out-of-place plaque mounted on the new US Consulate and for all that this plaque now stands for: the growing disaster nurtured by a leader who many of us have embraced because he’s “good for Israel”.

One more frightening thought:  The teenage gang blocking Nathan Phillips’  way while mocking him are our future American adults.  In the next 2020 elections they, along with their parents, will also be able to vote.  With this inevitable outcome, what can be our future? How should we act?

I am an artist.  As Albert Camus once cautioned, am I to continue to whistle to the stars on the deck of a slave galley, when at the same time the slaves, chained to their seats, are rowing the boat?  How can I break the walls of my own inaction in the face of injustice?  How can my pleas and rude awakening help to pierce the silence, as well as the hardened hearts of those who must also be awoken?

The smirk on the teenager’s face opposite the Native American elder Nathan Phillips will go down in history as one of the turning points of our century, not only for American history, but for our (Israel’s) tacit support of what has grown to be an untenable swamp.