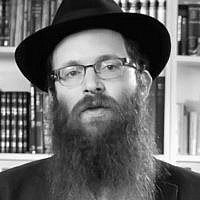 The Blogs
Yisroel Bernath
Apply for a Blog
Please note that the posts on The Blogs are contributed by third parties. The opinions, facts and any media content in them are presented solely by the authors, and neither The Times of Israel nor its partners assume any responsibility for them. Please contact us in case of abuse. In case of abuse,
Report this post.

I’ve been seeing Lindsey for almost a year now. We get along and have a great connection. Marriage is on our minds and we’ve been discussing it on and off. At one point, it became clear that she wanted to marry me, and the ball was in my court. Ever since then, I’ve been frozen and indecisive. I started to worry about different aspects of her personality and I’ve been asking for advice from many people.

At one point, I went to see a dating coach and she said it was “a divorce waiting to happen.” I told my girlfriend I would not marry her and within a few minutes, I regretted the decision I had made. We’re talking now and she understands what I’m going through.

It seems like she is what I really want, but how do I get past my fear?

Thank you for asking the million-dollar question. This is the most common issue I hear talked about in relationships: the “C-word.” Commitment is a big issue — especially for men, for some reason.

Even though it’s an age-old question, I’ll try to give as fresh an answer as I can.

It seems like by having made the “wrong” choice — apparently by being talked into it — you discovered your true feelings. This is one of the reasons for having a period of engagement. You get to try the commitment on before you actually stand under the Chuppah. You get to see if it feels right in your heart.

As a side note, I’m shocked that somebody who calls themselves a “coach” would have made such a decision for you. Obviously, you were advice-shopping, looking for someone to tell you “no,” so you wouldn’t have to decide for yourself.

But still, that should have been patently obvious to anyone who dispenses advice about relationships. And giving someone a final answer like that should only be done very rarely.

But I digress. Let’s talk about how we can make commitment a little less daunting.

We’ll begin with a story. There was once a gentile king with a Jewish adviser (as was common). The king asked his adviser: “Why do you, as a Jew, need so many commitments? Don’t they restrict you? Don’t you want to feel free?”

The adviser answered by asking the king to join him on the roof of the palace. Once there, he asked the king to approach the edge of the roof, as close to the end as he could.

The king — who was not accustomed to such dizzying heights — could not get to the edge of the roof. So the adviser asked him to return there in a few days. In the meantime, the Jewish adviser got to work.

When the king came back, he saw that his adviser had fulfilled the mitzvah of building a parapet, a barrier to protect one from falling (this is an actual mitzvah in the book of Deuteronomy).

The adviser once again told the king to approach the edge of the roof and this time, the king was able to go right up to the edge. The lesson was obvious.

You think that by committing to someone or something, you will lose your freedom. You will be stuck. But the opposite is true. Right now, you are stuck. You just don’t know it, because you’re in the middle of the roof.

If you ever decide to go to the edge — to grow as a person spiritually, or even emotionally — you will be afraid to fall. And rightly so — because without making a commitment to someone, you can easily lose yourself in the process of changing and growing.

The paradox is that once you have committed to someone, you will be more free to push yourself to your limits, and for your life to change and expand in ways you couldn’t imagine right now.

About Rabbi Yisroel Bernath
Rabbi Yisroel Bernath – dubbed as “The Love Rabbi” is featured in the Award Winning documentary “Kosher Love”. He has made over 50 successful matches. His expertise covers the entire spectrum of the Jewish community, from the secular to the religious. Rabbi Bernath is very passionate about building the Jewish community.

He has successfully helped hundreds of singles break through the “singles wall”. His caring yet firm style has given singles the hope and clarity they need to navigate dating and long-term relationships.

He can be reached at rabbi@jewishndg.com

About the Author
Rabbi Yisroel Bernath is Rabbi at Rohr Chabad NDG and is the Jewish Chaplain at Concordia University and has helped hundreds of singles break through the 'singles wall'. He founded JMatchmaking International (a network of Jewish dating sites) and has made over sixty successful matches so far, hence the "Love Rabbi" moniker. But you certainly don't have to be Jewish to make good use of his advice.
Related Topics
Related Posts
Comments