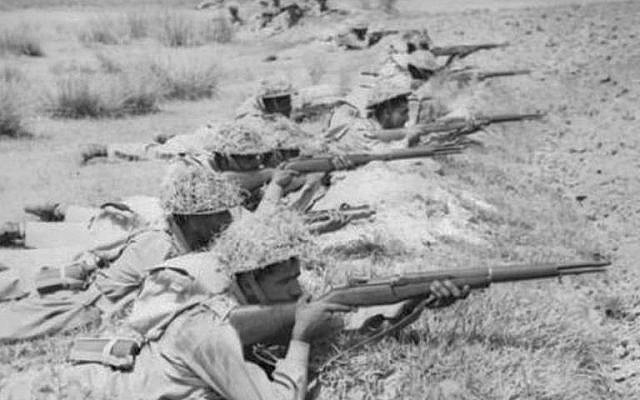 Pakistani soldiers during the 1947–1948 Indo-Pakistani war over Kashmir. (Wikipedia)

After achieving independence while India chose to remain an secular democratic nation and constitutionally protect its minorities, Pakistan declared itself an Islamic theocratic nation with scant respect for its own diversity. It began to persecute not only its minorities but also Muslims from India who had migrated to the newly established Islamic republic and thus began its quest for jihad which has now come to define the raison d’être of the country and its people.

On October 22, 1947, the first act of a newly established Pakistan was to start its first Jihad in Kashmir which was so devastating that even after 74 years people recollect those days of horror as the black day. The scale of horror and destruction was unimaginable.

This mayhem is deeply etched in the psyche of every Kashmiri – the reminder of Pakistan’s treachery, of the rapes, murder and pillage by armed tribal militia let loose by the Pakistani Army.

A couple of months after partition, Pakistanis entered Kashmir on October 22, violating all norms and previous agreements, and launched an armed attack on the state of Jammu & Kashmir with the help of tribesmen from the present day Federally Administered Tribal Areas (FATA) region. These were trained and supplied with ammunition, and directed by the Pakistani army. The armed tribal militia ran wild through the state, pillaging, raping, and killing hundreds of innocent people of the Valley, regardless of their religion. Kashmiri treasures were plundered. Parents poisoned their daughters in an attempt to give them death with dignity. Thousands were forcibly converted to Islam. Innocent children were massacred. Hundreds of thousands became homeless. It became impossible to count orphans.

Major General Akbar Khan of the Pakistan Army, who had organised the attack codenamed “Operation Gulmarg”, later had the wherewithal to recount his achievement in his book “Raiders in Kashmir”-this was the first of the many cases of Pakistan’s perfidy. Pakistan’s modus operandi has been that of creating a proxy war in the region, mainly in the name of Islam, killing innocents. This is why October 22 is the reminder of the Pakistan’s objective to annihilate Kashmir and Kashmiri culture. A very similar strategy, born initially to capture and covert Kashmir, has been used by Pakistan in Afghanistan. A Sunni Wahabi group, which has nothing in common with Afghanistan’s millennial culture is forcing its religious and social ethos, wiping the Afghan people and their identity, under the name of religion, with strong support from Pakistan’s army and secret service (ISI).

Baramullah, the melting pot of Kashmiri, Punjabi and British cultures, remains the most ghastly example of Human Rights violations. Women were abducted in 1947 and sold as slaves in the flesh trade markets of Rawalpindi and Peshawar, or sent off to distant tribal territories, their fate unknown till date. To save their honour many jumped to death in river Jhelum or close wells. Those who resisted were maimed or killed mercilessly and bodies thrown into the river Jhelum. According to eyewitnesses, the water in the flowing river had turned red with the blood.

As the world had abandoned Kashmir then, it is abandoning Afghanistan now. The most horrific case is of the St Joseph’s College, Convent and Hospital – the most publicised site of the entire raid. The nuns, priests and congregation, patients in the hospital – were raped and slaughtered. This included a few Europeans, including Lt. Colonel Dykes and his wife, an Englishwoman who had given birth a few days back; Mother Teresalina, a new young Spanish nun; Mother Aldertrude, the Assistant Mother Superior, and Mr Jose Barretto. While this went on Mr Gee Boretto, an Anglo-Indian was killed in the garden before the Christian nuns were lined up in front of a firing squad. The chapel describes these beasts as “savage mountaineers who were agile as wild cats” and who “looted the convent chapel down to its last brass door-knob”.

Ironically Col. Dykes from the Sikh regiment, who was deployed to India in the mid-1930s to help with the transfer of power, was a graduate of Sandhurst where one of his batchmates, Akbar Khan, would later become a Pakistan army officer and who engineered October 22 invasion of Kashmir where Dykes was murdered.

Pakistan has never apologised for the human rights violation carried out by its army, despite having often claimed credit for it. It is deeply saddening to see how the United Nations Human Rights Commission and Amnesty International have chosen to ignore this massacre which is documented. The assault of St Joseph’s mission in the peaceful foothills of the Himalayas was the start of a jihad to claim Kashmir – ‘Paradise on Earth’

Since that day in 1947, where over 35000 Kashmiri’s lost their lives Kashmir today is the most militarised areas in the world. Kashmiris are living on divided land and have Pakistan to blame for decades of violence.

The strategy that was born with Operation Gulmarg, was followed by the Pakistani army in East Pakistan (now Bangladesh). Ethnic cleaning and genocide coupled with the imposition of socio-cultural norms led to nothing more than the balkanisation of Pakistan to a new country, Bangladesh, in 1971. What Pakistan has left behind there is again decades of trauma, death and destruction. With the fall of Kabul to the Taliban on the 15th of August, this October 22nd has a larger significance, to never forget where it all started-in Kashmir with operation Gulmarg. Hopefully the international community will at least now heed to this threat which has now assumed global proportions and start keeping Pakistan in check.