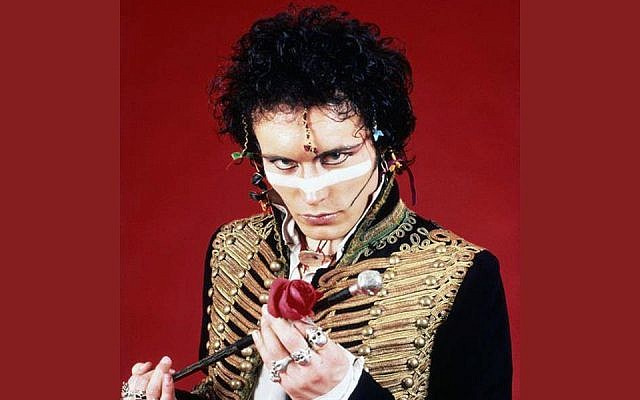 A long, long time ago, when I was much younger, I thought that Adam Ant was the very definition of a dandy. Wearing fabulous clothes in the styles of a pirate, a highwayman or even the military uniform of the 10th Hussars, Adam was the embodiment of his most famous song, “Prince Charming.”

Then I grew older and realized that he wasn’t the first dandy after all. In fact, his Royal Hussars’ uniform was inspired by the man who perhaps defined the term more than anyone else — George Bryan “Beau” Brummell.

Beau Brummell was immortalized by Annie, singing, “Your clothes may be Beau Brummelly” (“But you’re never fully dressed without a smile”). Or perhaps you know his name from Billy Joel, “”Well, you could really be a Beau Brummel, baby, If you just give it half a chance” (“Next phase, new wave, dance craze, anyways, It’s still rock and roll to me”)

Engraving of Beau Brummell from an article in Harper’s, 1855. (Public Domain/ Wikimedia Commons)

Brummell (who lived from July 7, 1778 to March 30, 1840) was a close friend of the Prince of Wales, who later went on to become King George IV (though by then he’d fallen out with his patron quite spectacularly). Brummell was not particularly brilliant, not particularly wealthy, his military career was not outstanding and though he did play a single first-class cricket match for Hampshire at Lords, he only made scores of 23 and three.

But he was one of the most famous men in Britain because he was the best-dressed man in the country (or so many thought).

Barbey d’Aurevilly, Jules, in his 1845 book “Of dandyism and of George Brummell” describes how this dandy defined fashion and his closeness to the Prince of Wales:

Brummell was the fashion, and it was Brummell, the son of the simple Esquire, of the private secretary, with a merchant for a grandfather, who was chosen, in preference to all the great names of England, to fill the post of best-man to the heir-apparent on his marriage with Caroline of Brunswick.

It was not only the prince but all the great men of London who were so taken by Brummell’s fashion sense (and his obsession with bathing) that they would come to watch him getting dressed — a procedure that would take several hours.

Bill Bryson describes the obsession with Brummell in “At Home: A short history of private life” (chapter 17).

Brummell lived in Mayfair and for some years his house was the epicentre of one of the more improbable rituals in London’s history – that of a procession of grown men of great eminence arriving each afternoon to watch him dress. Among those regularly in attendance was the Prince of Wales, three dukes, a marquess, two earls and the playwright Richard Brinsley Sheridan. They would sit and watch in respectful silence as Brummell began the daily process of grooming with a bath. It was generally thought an amazement that he bathed every day – ‘and every part of his body,’ as one witness added with special astonishment. Moreover, he did it in hot water. 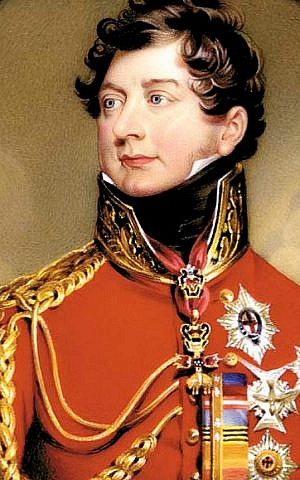 The prince of Wales also had a share in shaping Regency fashion, as he steadily gained weight, and had to be strapped into a corset (tactfully referred to as his belt). The high collars you see in the portraits of that time were originally intended to hide the prince’s double chins (eventually he became so big that people referred to him as the prince of Whales — but only behind his back).

Bryson describes how Brummell eventually had to flee from his gambling debts in Britain and lived for the last 25 years of his life in poverty in France. His downfall only took a moment —

He and the Prince of Wales had a falling out and ceased speaking. At a social occasion, the prince pointedly ignored Brummell and instead spoke to his companion. As the prince withdrew, Brummell turned to the companion and made one of the most famously ill-advised remarks in social history. ‘Who’s your fat friend?’ he asked.

Despite his ignominious end, Brummell’s dandyism lived on, and he became iconic — his witticisms and dress sense became known as Brummelliana. Many books, plays and even movies were made about Beau Brummell, and his name became synonymous with dressing well.

This week’s Torah portion, written thousands of years before Brummell and dandyism, describes clothing that was to be worn, “for splendour and for beauty” (Exodus 28:2).

Apart from bringing a twice-daily meal offering, the High Priest had very few tasks to perform in the Temple. But one day a year (Yom Kippur), he had to perform virtually every single one of the sacrificial rites. And he had to do so wearing garments that were intended to impress. 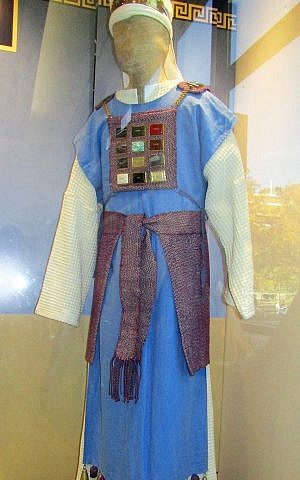 Clothing for High Priests, part of the display for the Tabernacle replica at BYU. (CC BY, Ben P L/ Wikimedia Commons)

“A breastplate, an ephod, a robe and a checked tunic, a turban and a belt,” (Exodus 28:4). And the crowning glory — the golden headband engraved with God’s name.

These garments were made from the most expensive materials — threads of “gold, and blue, and purple, and scarlet, and fine linen,” (Exodus 28:5).

These exquisite garments clearly demonstrated the greatness of the High Priest to the people.

Ben Sira describes the beauty of the most famous High Priest, Shimon the Righteous (Ben Sira 50:5-10).

How glorious he was, surrounded by the people, as he came out of the house of the curtain. Like the morning star among the clouds, like the full moon at the festal season; like the sun shining on the temple of the Most High, like the rainbow gleaming in splendid clouds; like roses in the days of first fruits, like lilies by a spring of water, like a green shoot on Lebanon on a summer day; like fire and incense in the censer, like a vessel of hammered gold studded with all kinds of precious stones; like an olive tree laden with fruit, and like a cypress towering in the clouds.

After the First Temple was destroyed, the Talmud (Megillah 12a) teaches that King Ahasuerus donned the clothes of the High Priest at his infamous party when he wanted to display his wealth and importance to the nobles of the 127 lands of his dominion.

But when the High Priest entered the Holy of Holies to perform the most intimate and holy service on Yom Kippur, he removed his beautiful clothes and instead wore a plain shift of white linen (albeit the most expensive linen imported from Pelusium in Egypt and India).

It was while wearing this plain white robe that the radiance of the High Priest shone brightest.

Ultimately, when he stands before God, even the High Priest, who was literally defined by his extravagant clothes, had nothing to cover him but a simple, plain white tunic. This shroud-like garment showed the true person behind the clothing.

I wrote several weeks ago that the clothes we wear say a lot about us and to a certain extent define us. But when we speak intimately to God we are stripped of our raiment and have nothing to hide behind, but who we truly are.