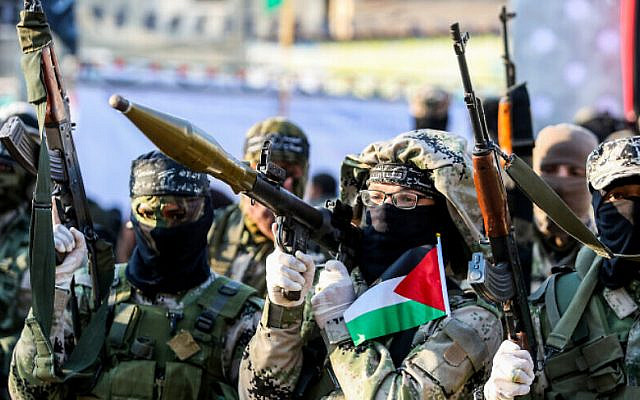 Palestinian terrorists participate in an anti-Israel rally in Khan Yunis in the southern Gaza Strip, on February 17, 2020. (Abed Rahim Khatib/Flash90)

The air raid siren pierced the silent night, waking our town at three in the morning. My first thoughts were “Rocket! Here???” We live on the Jordanian border and a rocket has never been landed near our town in over 50 years. As we gathered our children into the bomb shelter that acts as two of my daughters’ shared bedroom, we received a text message from the town’s security team that Palestinians had infiltrated our town and we were to lockdown. Gun drawn, I waited for an all clear from security.

As the Biden administration gets set to take the helm, they’ve declared a foreign policy priority to rehabilitate the U.S.-Palestinian relationship. This will include restoring American financial aid to the Palestinians, allowing the PLO to return to its offices in Washington, and reopening the East Jerusalem American consulate to service Palestinian Arabs in the West Bank. It is difficult to decipher their objective in rehabilitating the U.S.-Palestinian relationship. Ending the Israeli-Palestinian conflict by way of a peace deal hasn’t been a goal the Biden campaign discussed.

At some point over the past two decades Palestinian Arabs and their advocates have pulled off a masterful trick. The Oslo Accords and the quest to end the Israeli-Palestinian conflict had been known as the “peace process.” Instead of the focus being on peace, the focus switched to the creation of a Palestinian State. Progressives think the Palestinian cause is one of justice; not a means to a peace deal. In the shadows of claims of victimhood and calls for justice, the world has forgotten the violent nature of Palestinian “resistance.”

The world knows very little about Jewish towns in Judea and Samaria- most of the time that “settlements” are mentioned it’s in the context of “illegal” or “occupied.” The truth is that these Yishuvim are largely misunderstood. Here’s something that most people don’t know about Jewish towns in Judea and Samaria. In most towns like mine there are a number of full time and professional security personnel who guard our town from Palestinian Arabs. Above what the government contributes, each resident pays a tax in addition to regular property taxes. I and a few other people fundraise for state-of-the-art cameras and trucks.

Most of the time the professional guards are all we need to stay secure. Every once in a while, a “security situation” develops and there’s a need for a larger group to fend off an attack. In our town we have such a group. This volunteer cadre practices defending our town. There is no reason why our town should have to fend off attacks from neighboring Palestinian Arabs. We leave the Arabs around us alone, never taking action against them. There’s no reason why Palestinian Arabs should want to attack and kill our children, mothers and residents, and yet that’s the reality. Many consider our houses the impediment to peace and ignore Palestinian terror, but my house isn’t the impediment to peace.

The Palestinian Authority incentivizes terror through naming city squares after terrorists, teaching school age children about the glory of suicide bombings, and “pay for slay” that gives stipends to Palestinian terrorists. Two-thirds of Palestinians supported stabbings against Israelis, with the same percentage backing a larger armed uprising. In a survey, less than half of Palestinians in the “West Bank”, and Gaza support a two-state solution. Palestinians attempt an average of three terror attacks a day.