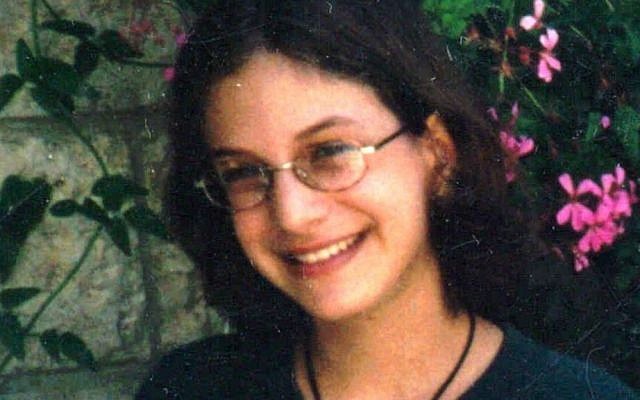 It’s the grief that keeps on taking.

That is, of course, the loss of a child, unique among other losses. Indeed, the murder of our precious fifteen year old daughter, Malki, in 2001 has been inflicting ever new and unexpected pain since we lost her.

First, there was the release of her murderer, Ahlam Tamimi, by the Netanyahu administration in the Shalit Deal of 2011. We are still reeling from that travesty of justice.

Then in 2012, our government freed another Shalit Deal releasee from West Bank “exile”, causing a baffling sort of pain. A murderer too, he was Tamimi’s cousin/fiancee. The pass Israel gave him to cross the border into Jordan directly contravened the terms of the Shalit deal.

Then why do it? Well, there had been press coverage in previous weeks of the “star-crossed lovers” and Israel’s “cruel interference” in their romance. Apparently our leaders could not withstand the media heat.

Word reached us that Israel intended to allow the male Tamimi to enter Jordan. We immediately engaged a lawyer to petition the High Court for an injunction preventing that move. However we were urged by the Prime Minister’s Office and the Justice Department to delay proceeding while they “looked into the matter”. Naively, we acquiesced. The delay enabled Netanyahu’s government to secretly whisk the murderer through the Allenby Bridge checkpoint unimpeded.

On March 14, 2017, the US Department of Justice unsealed its 2013 criminal complaint charging Ahlam Tamimi with conspiring to use a weapon of mass destruction against US nationals outside the United States resulting in death. Both Malki and a second victim — a young, pregnant woman who was her parents’ only child — were US citizens.

The US request for Tamimi’s extradition has been flatly refused by Jordan despite an extradition treaty signed by those two countries in 1995.

Observing the US and Israel nurturing their warm relationships with Jordan’s King Abdullah while he harbors a mass murderer has added yet another facet to our grief. President Trump recently hosted him at the White House and fell all over himself praising him:

In King Abdullah, America is blessed with a thoughtful and determined partner… The King has been a leader in calling for a plan to defeat ISIS once and for all. And I’m with you on that. We’re both leaders on that, believe me.”

At the same time, Israel has been exporting gas to Jordan from its Leviathan offshore field since March 2017. According to this source, it will maintain the current volume of gas throughout the 15-year contract with Jordan even if this means gas shortages for Israelis according to a secret letter signed by Mr Netanyahu and Israel’s energy minister. By comparison

Egypt has reduced the amount of gas it supplies the Jordanians, after it emerged that Egypt needed to reserve gas for its own people.”

A generous contract, to say the least.

Neither leader has raised the Tamimi extradition matter with the Jordanian king.

So you’ll forgive us our cynicism when Netanyahu dons expressions of gravitas and compassion, as he undoubtedly is on Yom Hazikaron — Israel’s Remembrance Day, to warn of the existential threat that terrorism poses to the Jewish people.

Here is what he said on Yom Hashoah — Holocaust Remembrance Day some years ago:

As prime minister of Israel, I will never shy from speaking the truth before the world, no matter how uncomfortable it may seem to some. I speak the truth at the United Nations; I speak the truth in Washington, DC, the capital of our great friend, the United States, and in other important capitals; And I speak the truth here in Jerusalem, on the grounds of Yad VaShem which are saturated with remembrance. I will continue to speak the truth to the world, but first and foremost I must speak it to my own people. I know that my people is strong enough to hear the truth.”

But Netanyahu did not speak the truth to his people when he told them in 2011 that he had written to every victim of terror’s family to explain and apologize for the release of the murderers of their loved ones. The truth was he had written to none of them and never has to this day.

He never responded to our written pleas to him to delete the mass murderer, Ahlam Tamimi, from his list of Palestinian prisoners included in the Shalit Deal.

He never explained the bizarre release of Tamimi’s husband from the West Bank.

And now, he has not explained his silence about Jordan’s refusal to extradite Tamimi to the US.

We dream of the day when this hypocrisy will cease; when this mass murderer who widely disseminates her brand of evil and hatred will be returned to prison; and when we will be free to grieve for our Malki without the painful burden of these additional injustices.