Today is the beginning of a new Israeli government. May God bless this government and the State of Israel. Here are my thoughts

I have no idea if this government will succeed, lots of moving pieces, lots of different views and many who want it to fail. However, I can’t help seeing the beauty of the spectrum of the Israeli people with representatives from many different cultures, philosophic backgrounds and religious affiliations. Sure, I would have loved to see a representation of an important segment of the Israeli public—the Haredi world (though they are welcome to join)—but short of that look at some of whom are representing us as ministers in this new government:

A Modern Orthodox prime minister from Raanana from Yamina

A prominent non-religious politician from Tel Aviv who, with the second-largest number of mandates, found a way to bring in 61 disparate members to form a new government from Yesh Atid

A famous Russian-born leader living in Gush Etzion who is both right-wing and left-wing!

A far-left openly Gay leader of the Meretz movement

A Major general (first woman ever!) from Afula, family from Iraq living in Tel Aviv

An Arab-Israeli politician from Meretz living in Kfar Kasem

A member of the Israeli Olympic Judo team

A woman educator (PhD) from Kiryat Shmoneh from Moroccan lineage, who defected from Likud and joined Saar

A center of left religious Army personality living in Hoshaya

A secular right-wing former minister of justice for Yamina

An Ethiopian woman from Petach Tikvah 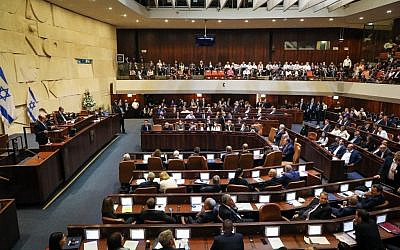 Some will say that this is not really representative of the Israeli public because Likud is not in the government, I beg to differ. There are enough disgruntled former Likud personalities, indeed a whole party (Saar) and perhaps Bennet too, who were part of the general right of center Bibi orbit but needed to make a fresh start.

Others will say that the government hinges upon four Arab mandates from the Raam party who are not exactly Zionists. This is true. As Amit Segal saidת only time will tell if Abbas is a wolf in sheep’s clothing which will bring down the new Israeli government, or a sheep in a wolf’s clothing which might represent a new era in Israel. Some lament it is not ‘religious enough’; others feel it is too diverse not representing the ‘real Israel’.

I can’t help but think of the model of the 12 tribes of Israel, disparate, each with its own complexion, independent, yet possessing a unifying character in ancient times it was the Mikdash in Jerusalem–today I hope it is the mission to be a haven for Jews from all over the world and a Jewish democratic society open to the world and at the same time attempting to create a kiddush Hashem throughout the world.

This government will raise many emotions, some thinking it is a doomsday which will be the end of the Israeli state. I have a different perspective. I work in Poland. Just last week I stood in Birkenau and memorialized the millions of Jews who were murdered in the last century. Auschwitz is most famous probably because of the numbers of Jews who survived. Belzec, on the other hand, was a killing field in which 500,000 Jews were murdered within 13 months with only 7 survivors! Treblinka saw 900,000 Jews murdered in the same period. Each month between 1942 and 1943 several hundred thousand Jews were murdered.

History gives us perspective, teaching us to recognize the miracle that is the state of Israel today, and to be filled with gratitude for what we have and what this government entails. We have had complicated years of political paralysis and today represents a new beginning. Perhaps it will succeed, perhaps not; nevertheless, it is our honor and privilege to welcome the 35th government of Israel with hope and prayer that it will succeed and God will shine His light upon it and all of Israel.

Prime Minister Bennet in his final words prayed to God and invoked the special prayer we recite every week in Synagogue:

Our Father in Heaven, Rock and Redeemer of Israel, bless the State of Israel, the first manifestation of the approach of our redemption. Shield it with Your lovingkindness, envelop it in Your peace, and bestow Your light and truth upon its leaders, ministers, and advisors, and grace them with Your good counsel. Strengthen the hands of those who defend our holy land, grant them deliverance, and adorn them in a mantle of victory. Ordain peace in the land and grant its inhabitants eternal happiness.

Amen. Let it be His will.