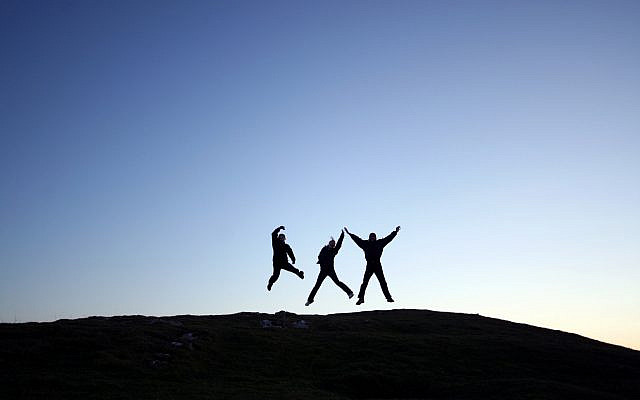 The Hebrew name for the holiday of Passover is Pesach. The Paschal Sacrifice with which the holiday is associated is likewise known as the Korban Pesach (Pesach Sacrifice). What does the word Pesach actually mean? Rashi (to Exodus 12:11; 12:13; and Isaiah 31:5) explains that the word pesach is an expression of dilug and kefitzah. The latter two words are types of jumping, and as we shall see, Rashi correlates the idea of the Jews’ Exodus from Egypt to the act of jumping. In order for us to fully understand Rashi’s intent in doing so we must delve into the exact meanings of the words dilug and kefitzah, what each word implies, and how those ideas belay a deeper understanding of the word pesach.

The words dilug and kefitzah appear side by side in a Biblical passage that we read every year on the Shabbat of Passover: The voice of my beloved — behold it comes! — jumps (midaleg) over the mountains, jumps (mikapetz) over the hills (Song of Songs 2:8). What is the difference between these two different words used for jumping? In elucidating that passage, the Vilna Gaon explains, based on the Jerusalem Talmud (Beitzah 5:2), that kefitzah refers to a form of jumping whereby one lifts both feet from the ground. On the other hand, dilug refers to one who “skips” by grounding one foot and using the other foot to spring himself forward. This explanation is also cited by Maimonides (Rambam, 1135-1204) and the Rosh (Rabbi Asher ben Yechiel, d. 1328), in their respective commentaries to the Mishnah (Ohalot 8:5).

Rabbi Shimshon of Shantz (d. 1230) offers another way of differentiating between these two words. He writes in his commentary to said Mishnah that dilug is the word used for an animal that jumps, while kofetz is the word used for a human being who jumps. Thus, while Maimonides understands that the difference between dilug and kefitzah is in the style of the jump, Rabbi Shimshon understands that the difference lies in the subject of the action — but both words equally refer to the same way(s) of jumping.

While Rabbi Ovadia of Bartenura (1440-1500) cites both of these views in differentiating between dilug and kefitzah, Rabbi Yisrael Lipschitz (1782-1860) takes issue with Rabbi Shimshon’s explanation. Bartenura openly accepts Maimonides’ approach and points to different sources which seem to contradict Rabbi Shimshon’s position. For example, the Mishnah (Bava Kama 2:3) which speaks of a case in which a goat jumps from a roof and damages another’s property, uses the word kofetz to describe the goat’s action. Similarly, when the Mishnah (Bava Batra 2:4) rules that one must distance his ladder four cubits from his neighbor’s dovecote so that a marten (a cat-like animal) cannot jump from the ladder to the dovecote, it also uses the word kofetz to describe the marten’s action. Furthermore, when the Talmud (Berachot 19b) relates the halacha that one is permitted to jump over human graves in order to greet a king, the word used for jumping is midaleg. These sources suggest that the word doleg is not exclusive to animals and the word kofetz is not exclusive to humans. Moreover, the above-cited passage in Song of Songs proves that both verbs can apply to the same subject.

Rabbi Shlomo Aharon Wertheimer (1866-1935) suggests that while both words mean to jump, the difference is in how high. The word dilug implies a higher jump than does the word kefitzah,because in the above-cited passage from Song of Songs the former is used for jumping over a mountain, while the latter is used for jumping over a hill. We may posit that the word dilug could more accurately be translated as “skipping”, while kefitzah means “jumping”. In English the verb “to skip” refers to a leaping gait while walking (e.g., “Johnny happily skipped down the street.”) and to the evasion of something unneeded or unwanted (e.g., “Johnny skipped the boring parts of the book.”). In truth, both actions are conceptually similar, as the advantage of the ambulatory skipping is that one avoids walking on top of something upon which he does not want to tread, effectively “evading” it. Similarly, in Hebrew, the verb form of dilug refers to both of these types of actions.

Rabbi Shlomo Pappenheim of Breslau (1740-1814) explains that kefitzah refers to walking the distance of multiple footsteps with a single step. This may sometimes involve “jumping” above ground, but the goal of such a way of walking is simply its speed in getting to one’s place of destination. When one is kofetz he is not trying to avoid or skip over something; he is simply trying to reach his journey’s end faster. The word kofetz is also used idiomatically to refer to any action performed in haste or without proper contemplation. For example, when the Talmud talks about somebody taking an ad hoc oath, he is said to have “jumped and sworn”. The miraculous shortening of one’s journey is known as kefitzat ha’derech, literally, “jumping of the path,” in allusion to the speed with which one reaches his final destination. Rabbi Yaakov Lorberbaum of Lisa writes that dilug may actually denote a movement that’s faster than kefitzah, but the focus of dilug is nonetheless that which is skipped, rather than the speed of the act.

Earlier, we mentioned that the Hebrew name for the holiday of Passover is Pesach and the sacrifice associated with that holiday is likewise known as the Korban Pesach (Pesach Sacrifice). We cited Rashi’s explanation (to Exodus 12:11; 12:13; and Isaiah 31:5) that the word pesach is an expression of dilug and kefitzah, both of which are words for jumping. Indeed, the Paschal Sacrifice is called the Korban Pesach because it commemorates G-d “passing over” or “jumping over” the houses of the Jews when He struck the Egyptians with the Plague of the Firstborn. The holiday is accordingly named after the sacrifice associated with it. In the following paragraphs we will demonstrate exactly how the word pesach means “jumping”, but is not fully synonymous with the words dilug and kefitzah.

Rabbi Avigdor Neventzhal (Chief Rabbi Emeritus of the Old City of Jerusalem) points out the obvious: when we speak of G-d “jumping” over the Jews in order to afflict the Egyptians with the Plague of the Firstborn, this cannot mean that He literally “jumped” over them, because He does not possess any physical body with which to perform such an action. Rather, the Torah speaks from the post facto perspective in which the Egyptian firstborns died, and the Jewish ones did not. In hindsight, it seemed as if G-d “jumped” over the Jews and smote only the Egyptians. In what way can this be called a dilug? Rabbi Neventzhal explains that just as the idea of dilug is to “skip over” something which has been deemed unnecessary, so too did G-d “skip over” His general requirement that one perform some act of commitment to seal his connection to G-d before G-d will allow that person to come close to Him. However, at that the Exodus, though the Jews had not yet exhibited that desire to connect to G-d, He nonetheless performed miracles on their behalf and took them out of Egypt.

In a similar vein, Rabbi Nachshon Schiller focuses on the haste with which the Exodus from Egypt occurred. Kabbalistic sources assert that during their stay in Egypt, the Jews had alarmingly fallen to the forty-ninth level of impurity and seriously required the Divine intervention of the Exodus. The urgency of the matter is highlighted by the Jews’ descent to the depths of impurity. Had the Jews remained in that land for an extra moment they would have plunged to the fiftieth level of impurity, from whence it would be impossible to recover. Therefore, G-d hastily redeemed the Jews before it was too late. Rabbi Schiller explains that for this reason G-d commanded that the Paschal Offering be eaten “in haste” (Exodus 12:11); eating from that sacrifice should be done quickly in imitation of G-d’s fast-acting miracles that brought the Exodus. In this way, the word Pesach is related to the word kefitzah, which denotes the speed of the jumper.

To summarize, the Exodus from Egypt has both an element of “skipping” and an element of “speed”, concepts which shed light on Rashi’s comment that Pesach is related to dilug and kefitzah. In redeeming the Jews, G-d waived the usual requirement that the recipient of Divine assistance actively show his commitment to Above. In essence, the Exodus basically “skipped over” (dilug) that general prerequisite for a miracle, a favor celebrated in the name Pesach. At the same time, the urgency and gravity of the dire situation demanded that G-d redeem the Jews immediately, and the speed (kefitzah) with which He did so is also immortalized in the very name of the Holiday of the Exodus — Pesach.

Before concluding I would like to point out another insight related to the Hebrew word pesach — and its verb form poseach. Those wordsshare their etymological root with the Hebrew word piseach (lame or immobile). The root of both words is the letter combination peh–samech–chet. This occurrence is a poignant example of a common phenomenon in the Hebrew language whereby words whose meanings are conceptually diametric opposite are sometimes phonetically/orthographically similar (i.e. they are spelled or pronounced the same). This phenomenon illustrates the notion that words in the Hebrew language are not mere happenstance based on human whims, but possess inherent meanings and follow a Divine intuition not found in other languages. Therefore, a paralyzed person or an amputee who has been rendered immobile is known as a piseach, a word which resembles the very mobile act of “jumping” (poseach).