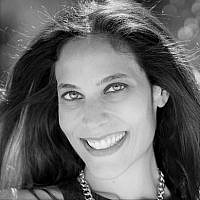 The Blogs
Rachel Wolfson
Apply for a Blog
Advertisement
Please note that the posts on The Blogs are contributed by third parties. The opinions, facts and any media content in them are presented solely by the authors, and neither The Times of Israel nor its partners assume any responsibility for them. Please contact us in case of abuse. In case of abuse,
Report this post.

I spent three-and-a-half glorious years living in Tel Aviv. These were by far the best years of my life. It has now been one year since I’ve been back in America. My next trip to Tel Aviv is only a few weeks away and I am beyond excited to go back to Israel. I’m sure that this brief, 10-day trip to the Jewish homeland will be life changing. I know this because I left something behind when I made the decision to leave Tel Aviv — I left my heart there.

Pieces of the Past

Over the years, I’ve learned that you first have to be lost in life in order to be found. For example, I didn’t know who I was when I first moved to Tel Aviv. I was just a twenty-four-year old girl who wanted more from life than what America had to offer.

One year ago — when I left Israel — I considered myself to be “found.” I was twenty-seven years old and so much more knowledgeable than I had been when I first made Aliyah. This is because living in Israel taught me some very important life lessons that I simply never would have learned otherwise. For example, three things I learned were:

I could continue to write about all the lessons that I learned while living in Israel, but that would turn into a book rather than a blog post. The point I want to make though is, that as I reflect back on the many things that I learned while living in Israel, I’m overcome with emotion. Since moving back to America, I feel lost yet again. Not in the same way I did when I was twenty-four years old and seeking adventure, but in a way that involves not knowing where my heart has gone.

This is why going back to Israel for the first time since I’ve left will be life changing. I am going not only to visit, but to hopefully pick up the pieces of my past that I left behind, so I can feel whole once again and become one step closer to finding my true self.

About the Author
Rachel made Aliyah at the age of 24. She moved to Tel Aviv from Dallas, Texas by herself, after falling in love with the country on a birthright trip. Rachel currently lives in San Francisco where she works as a content marketing consultant and a blogger for The Huffington Post. Follow Rachel on Twitter, LinkedIn or Facebook to stay up to date with her most recent blog posts and articles.
Related Topics
Related Posts
Comments