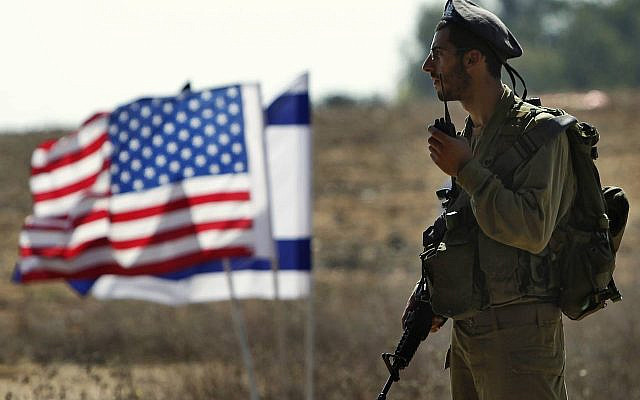 Proposals to politicize our strategic funding alliance with Israel are wrong, dangerous, and would undermine America’s strategic alliance with our greatest ally in the Middle East — and we must oppose them.

At J Street’s conference earlier this month, both Senators Elizabeth Warren and Bernie Sanders made it very clear they support new, unnecessary restrictions on critical U.S. security assistance to Israel, a position shockingly endorsed and promoted by J Street itself. This follows on the heels of a new anti-Israel bill introduced by Chair of the House Appropriations Defense Subcommittee Rep. Betty McCollum, also supported by J Street, which directly aims to add unnecessary restrictions on U.S. aid to Israel. These moves to condition or restrict security assistance to Israel are just the latest in an ongoing effort to undermine Israel and the U.S.-Israel relationship.

Additional conditions on U.S. aid to Israel are unnecessary, and the rhetoric being used to normalize them is dangerously misleading at best. The idea that the U.S. is sending Israel a blank check is preposterous. Current U.S. law already establishes numerous conditions for aid to Israel and the U.S. government is obligated to review each and every expenditure.

Further, our strong security alliance with Israel remains key to both of our countries’ strategic interests and helps to further promote peace.

Israel has a duty to protect its citizens against hostile enemies who would rather see Israel annihilated. U.S. financial assistance to Israel is a critical component to keeping Israel safe against constant threats from its neighbors by providing it the means to defend itself, by itself — without the need to put American soldiers at risk. Israel’s neighbor, Iran — which continues to violate the nuclear terms established under the JCPOA — has repeatedly called for the “Israeli cancer” to be wiped off the world map. Iran also continues to provide financial and operational support for terrorist groups like Hezbollah and Hamas that continue to carry out and threaten attacks on Israel. In the face of these constant existential and physical threats from its neighbors, Israel’s military and defense capabilities are necessary — and our security aid helps.

The security alliance provides unquestionable benefits for the United States as well.  The aid we provide to Israel, most of which must be spent in the United States, enhances our own geostrategic interests of regional security and stability by deterring major war, and it provides for us a trusted partner and ally in an otherwise unstable region of the world. Through its strategic partnership with the United States, Israel has created lifesaving missile defense systems like the Iron Dome and David’s Sling, tested and deployed new technologies, and developed sophisticated intelligence and counterproliferation efforts to reportedly foil several terrorist attacks around the world in just the past few years alone.

This military aid that the U.S. has provided to Israel since World War II has helped transform Israel’s armed forces into one of the most technologically sophisticated militaries in the world, helping ensure that the Israel Defense Forces maintain what is known as a “Qualitative Military Edge” (QME). QME refers to Israel’s ability to counter and defeat any credible conventional military threat from any individual state, a coalition of states, or non-state actors, while sustaining minimal damages and casualties, and has greatly contributed to its ability to defend itself in one of the most dangerous regions in the world.

A strong Israel, one that is backed with the faith and support of the United States government, deters aggression and promotes peace, a goal we all share. In a region where Israel’s adversaries outnumber it by multiple factors and control vastly greater land areas, Israel’s QME has greatly contributed to peace and stability in the Middle East by reducing the threat of regional war. It has protected Israelis and Palestinians alike by affording Israel with the level of “strategic patience” needed to minimize any potentially escalatory military campaigns in the region.

This, in turn, has increased the chances for peace and shared progress and prosperity for all.  The historic peace treaties with Egypt and Jordan, and now the growing number of Arab countries making peace with Israel in the context of the Abraham Accords, reflect the reality of a strong Israel, militarily and economically. American aid over the years has helped make this transformation possible, and ultimately we hope, will also help make a peace settlement with the Palestinians a reality.

Placing unnecessary political restrictions and limitations on aid would jeopardize this progress and undermine peace. Israel finds itself up against ruthless hostile terrorists every day, who already use women, children, and other civilians as innocent targets. These terrorists will quickly use any new restrictions or limitations on aid to Israel as additional guidance to help develop their next threats or targets.

Thankfully, the vast majority of members from both parties in Congress understand these nuances and continue to note the importance of maintaining and strengthening U.S. aid to Israel. Just as J Street was giving voice to the idea of restricting aid to Israel, 330 members of Congress from both sides of the aisle, led by Congressmen Ted Deutch and Michael McCaul, made it clear that they opposed such a move.

These 330 members of Congress noted that “U.S. support for Israel makes the region a safer place and bolsters diplomatic efforts aimed at achieving a negotiated two-state solution, resulting in peace and prosperity for both Israelis and Palestinians.”  Unlike Rep. McCollum, they understand our shared strategic interests in the region, which include combatting Iranian aggression and terrorist networks, and supporting democratic change, economic development and lasting peace in the region.

These latest calls to treat Israel, our ally, as an adversary and to limit its ability to defend itself are dangerous political stunts. Adding political conditions, restrictions, and limitations to our alliance with Israel is just another attempt to undermine Israel’s legitimacy. We must instead uphold our commitment to our proven ally, and work to promote Israel’s survival, which is critical to peace.