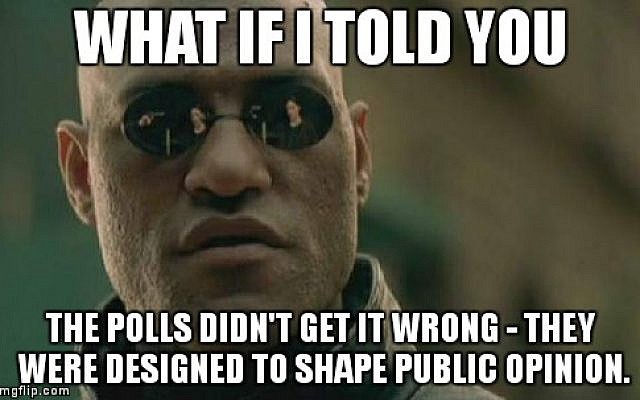 We know for some time already how poorly they predict. After the last Israeli elections, I assumed that most of them would retire or get retrained in some other profession. But no, they didn’t. And now they’re here to blame us.

They don’t work poorly – we mislead them. And thus they get unreliable result that differ from pollster to pollster.

However, each of them see trends between their consecutive polls, so their mistakes are systematic and not due to us, the people.

It a familiar game in this region, to blame everyone but oneself. If they were physicians they would be brought to court. If they were weather forecasters they would be ignored forever. But they have been granted open access to all the media no questions asked. That should stop.

Indeed, it is impossible to say if the bad polling results comes from incompetence or malicious manipulation (or both). But bad they are.

It’s not the first time that I report on terrible polling. But in any case, may it be clear that they’re the bad guys and we’re their victims – not the other way around. And that’s not a prediction. That’s a fact.

Meanwhile, why should we trust anything pollsters claim? In this country, voters decide, not pollsters and not even police recriminations.