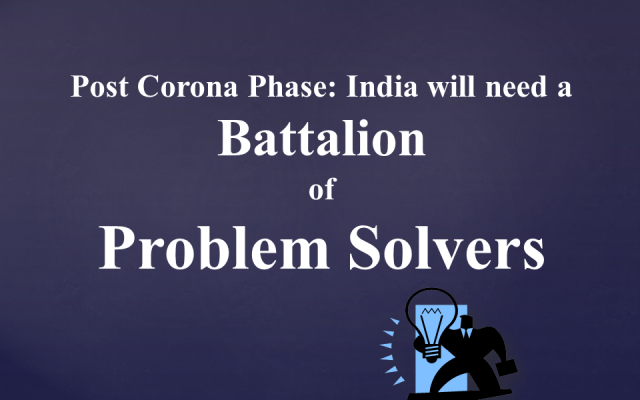 Post-Corona lockdown challenges need to be tackled on a similar war footing with which we fought the pandemic itself and if this approach would combine the ‘Nation First’ spirit, then the results will certainly be remarkable.

Ideological differences and politics have their own space in democracy but the battle against the corona crisis cannot be half-hearted. There are occasions when people expect even the opposition to play a constructive role, and today is such time. But from the last few years, the way our political systems have adopted the word ‘opposition’ in its literal sense is really disturbing. Political opportunism’s hangouts with the problem branding experts can be more perilous for the health of an economy, than the corona crisis itself. Sometimes the smartly packaged solutions of award category experts (which they offer to their home country) seem as untimely as the idea of the entire developing world, someday start claiming their colonial-era compensation from the West for their current economic losses.

However, at a time when the eagerness to celebrate anticipated economic bankruptcy and social chaos is high, we need to recognize that the Post-COVID phase will need more problem-solving minds than problem highlighting.

From Problem Branding to Problem Solving

Branding of the problems is an art that India’s longest-ruling party Congress has mastered in. It is interesting to see how a national party can use the same ‘Garibi Hatao’ slogan, throughout the entire history of its political journey. Generation after generation they embraced it to an extent that this slogan almost became a badge of glory for them. During their long rule, Congress offered only India’s poverty-stricken image to the global community and kept the potential of such a huge and diversified democracy underestimated. They developed a culture of delay and problem accumulation (from top to bottom), nurtured several corrupt processes and hierarchies, and laid down the landmines of problems in every sector of the economy.

An overview of the post-independence phase of India often gives this impression that the country lacks a problem-solving culture and there is no appetite for solutions in the society as a whole. Problem branding campaigns of the few political parties have gradually overshadowed the larger character of the Indian society. But the fact is that Indians are essentially problem-solvers, and this basic pulse of the Indian society was deliberately got neglected by the previous administrations. Can a country that has an ancient legacy of contributing solutions and scientific discoveries to the global knowledge assets, which has a timeless tradition of solution-seeking, will ever prefer to remain in an inactive and delay mode when it comes to their basic problems?

One of the major reasons for the thumping win of the Modi government consecutively for the second term is its track record of solving some decades-old problems of the country.

New India is not ready to be bogged down by the problems of the past. It is the result of the refreshed problem-solving attitude of the government machinery and people which has made some bold and mega moves i.e. Demonetization, GST implementation, Jan Dhan Bank Accounts, Mudra Yojana, Rural electrification, Ujjwala Yojana, Swachh Bharat Abhiyan and sanitation coverage drive, etc., remarkably successful.

From the beginning of the second inning, the Modi government’s resolve to solve problems is stronger than before, and we have seen some historic decisive moves within the first 8 months itself. In December 2019, when the Indian parliament enacted the Citizenship Amendment Act, it solved several decades-old problems of non-Muslim minorities, which migrated to India (before December 2014) after facing violent religious persecution in Pakistan, Afghanistan, and Bangladesh, three Muslim-majority nations belonging to India’s immediate neighborhood. In the month of November 2019, A five-judge bench of the Indian Supreme Court (the Highest Judicial Court of India), after a fast-track hearing of 40 days, unanimously declared the final judgment on Ayodhya dispute, an issue which has hundreds of years of history. The way the Indian judiciary concluded that decades-old process is exemplary and will always be remembered as an important milestone of our times. The decisiveness which India has shown towards the legacy problems is encouraging for other democracies too, whether it is the abrogation of Article 370 and 35A, creation of two independent union territories – Jammu & Kashmir and Ladakh (again a long pending demand), the abolition of the evil practice of triple talaq (in the Muslim community) or signing of historic Bodo Agreement between Government of India, Government of Assam state and Bodo representatives, which ended a 50-year-old Bodo crisis. This year Indian government concluded a quadripartite agreement with state governments of Tripura and Mizoram and Bru-Reang representatives and put an end to the 23-year old Bru-Reang refugee crisis too.

These moves were a part of the BIG problem resolution drive but there are several other small steps too, which solved some of those problems that had crippled the growth of the country for a long time. When India leveraged JAM (Jan Dhan Account- Aadhaar- Mobile) trinity it solved an age-old problem of benefits transfer to millions of poor people, this paved the way for PM KISAN, LPG subsidy transfer, pensions, and other direct benefit transfers and stopped a massive leakage in the system.

India has ended the problem of silos in Water Management when it formed Ministry of Jal Shakti, it also put an end to the difficulties of small shopkeepers/retail traders when it initiated a pension fund scheme for them, it ended the miseries of millions of poor people too when it implemented Ayushman Bharat, world’s largest and fully state-sponsored healthcare assurance, and there are several other such moves which can be counted on.

It may be surprising to many but even after 70 years of Independence, previous governments had left a larger part of the country outside the mainstream development chart, these were called the backward districts as they legged behind on almost every parameter (health, nutrition, maternal mortality rate, vaccination, education, the crisis of water/electricity/food and road connectivity, etc.) and there were some 15 crore extremely poor people in these districts mainly tribal, Dalit and backward. It seems that only by tagging these districts as ‘backward’, earlier governments assumed that they have done their job. But Prime Minister Narendra Modi decided to tackle this challenge too. He changed not just the tag of these districts from backward to ‘Aspirational Districts’ but reformed the entire approach of the government machinery. Now the government is developing these 112 aspirational districts on every parameter of governance and development and there is a conviction that India’s overall development parameters will get a big push from the improvement of these districts.

Strong problem-solving culture and the spirit of ‘Collective Efforts’, which Prime Minister Narendra Modi has inspired as a leader is now helping a country of 1.3 billion people to deal with the corona crisis effectively. But to face the Post COVID challenges India needs to upgrade its current problem-solving culture to the next level. The battalions of problem solvers should emerge from every domain and every sector of the economy and they should be encouraged to contribute to this reconstruction phase of the country.

A crisis that communist mindset has started, which forced the people to make ‘distance’ with each other and lockdown their aspirations, should be ended through the collective power of people and that would be the biggest success of humanity. India, the largest democracy of the world, which is also home to one-sixth of humanity, should lead this fight from the front.