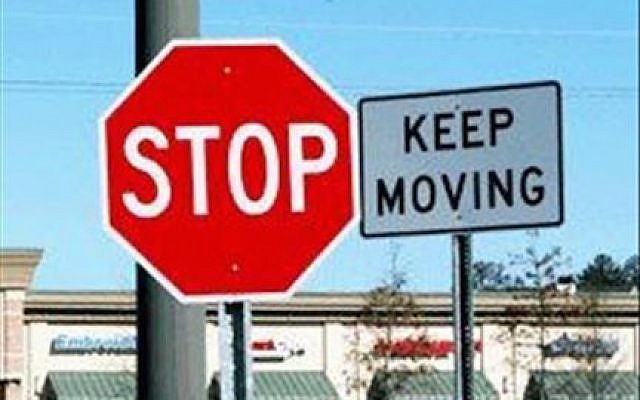 stop-keep moving (photo by the author)

I awoke at 3 am, groggy and sleepers in my eyes.  “It’s post-election blues”, I say to myself.  It’s now nearly 7 am, and I am basically the same.  The weather has been dusty like my mind which lacks sleep.  We are all in stasis until the double-enveloped votes are counted, but things will no doubt stay the same.  Each of our elections cost enough to build two new hospitals, so we are at eight hospitals (missed) and counting.  The low voter turnout indicates apathy, a knife in the heart of our democracy.  I think of our children and imagine what they must think.  Their studies were only passive journeys into zoom-land.  Now their fearful leaders have become puppies, powerless to change our nation’s course.  Yes, it is the system. But it is also the frozen unbending quality of our leaders’ hatred of each other which is the real enemy.  When will it stop?

I see more sun now.  That’s a good thing.  My doctor says I am lacking in vitamin C, though the latest blood test indicates extremely low hemoglobin, signifying anemia.  Of course I am familiar with anemia because it is all around us, oozing from the pores of our stuck leaders who should all be put on a desert island with only nuts and berries–and should only be picked up and brought to shore when they have solved their issues with each other.  Hell, scientists pow-owed during the Manhattan Project and produced the most heinous weapons of mass destruction.  Albert Einstein is turning over in his grave.

Pigeons have been gathering on my window sill to do “their thing”.  Unfortunately their things are many.  So I have spread a carpet of chili pepper on the sill (I read that this keeps the pigeons away), but lo and behold I see them eating the pepper flakes and enjoying them.  They return for more.  Like us! We have had four elections and haven’t learned anything.  But we are basically powerless.

It’s the 7 o’clock news.  Why is it called “news”? It should be the “olds”.  But then people would think that it is an automobile.  Did you hear the joke, “A skeleton walks into a bar and says ‘May I have a beer and a mop please?’ ”  We are like the skeleton trying to our guzzle a beer before the Passover hiatus while we are slowly losing our very being, the ability to fight and change. Sad.

The blurred newscaster’s voice is unintelligible. I will go closer to hear what he has to say… He says that they are increasing the number of trains to Jerusalem during the holiday, adding eight more a day.  I am leaving with my wife to visit friends in Pardesiya.  I have heard that their garden is blossoming full-time.  However the nearby beach is still covered with tar.  So many problems to be solved.  No doubt when our leaders emerge from their island retreat of eating nothing but nuts and berries, they will solve all our lingering problems, not the least of which is our under-supplied and understaffed hospitals that are at the verge of collapse.  Perhaps after the fifth election our leaders can save some coins for the day they begin using public funds for building newly equipped health facilities rather than the expensive cigars used in celebrating their victories.

Oh the pigeons are returning. They are comforted by the red carpet I have laid out for them.  They seem to be celebrating. I haven’t the faintest idea what and how.  Life moves on. The day is sunny. The day is warm.