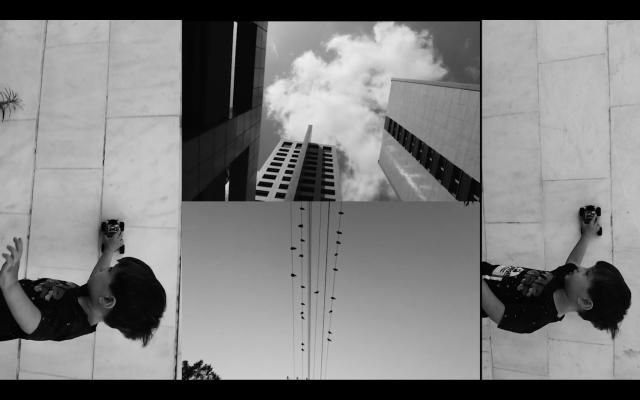 Screen from 'In the Can - Video Art' video by Jason Fredric Gilbert.

“When the doctor gets on the phone, it’ll be a conference call.” he says in a rehearsed way, as if he had repeated the line verbatim to a half dozen schmucks just like me in the last hour.

“Just tell him about the incident.” He emphasizes the word. Incident.

“What incident?” I ask, feeling as stupid as I looked. Was it a trick question?

“You know…” he says but holds back. “Did you serve in the army?”

I did, but “serving” is a bit of a stretch. Did I show up every morning at the base at 11 a.m. with a litany of excuses and letters from specialists explaining why I was tardy, not in uniform and reeking of booze? Yes. Did I leave the base every day at 1:30 p.m. (right after a double portion of lunch and a quick nap)? Yup. Was I at any point involved in an incident that might induce PTSD? Not really. I was an army photographer, so the closest I came to seeing action was when I accidentally got on the wrong truck; instead of heading back home for a nice long weekend, I had gotten on the truck headed to the Lebanese border. Man, was that awkward. A bit of complaining and threatening and I was let off at the first bus stop.

“Yeah, but I don’t remember any incidents…”

“What about Jerusalem? You must have been been caught up in something there. Think.”

So I think. And the only thing I can think of is my 10th wedding anniversary. I promised M we would finally go to that amazing Korean restaurant she had read about. We got lost and wandered around for hours, arguing and upset. Marriage itself can induce PTSD. I argued that exact point, but I could tell he wasn’t having it.

“I mean, were you there during an uprising in the Old City…” and he trails off. I know what he’s thinking. This guy is a real putz. Do I have to spell it out for him?

So I keep thinking about my experiences in Jerusalem, looking for that one event. That incident.

There was a time M and I joined a free Saturday tour of Jerusalem’s Old City. I was snapping photos of the vendors and lost my wife and son. I called her phone and it starts ringing in my backpack. Shit. I’m lost and separated from my family near the Lion’s Gate of the Old City. I panic and start to sweat. Finally, a border patrol officer sees me and gets on her walkie-talkie to sort it out. I was reunited a few minutes later. All’s well that ends well.

Ah, there’s Bituach Leumi! Every time I get an SMS on my phone that there’s a letter waiting for me in my personal section online, I go into a cold sweat, plan my fake suicide and devise a new identity, a country to which I can escape and a clever backstory.

I think back. I’m too young to have participated in the Six Day War, but… I’ve been an unwilling participant in each of Israel’s mini conflicts with silly names over the past few years.

Operation Rising Dawn in August of 2022. That lasted from August 5th-7th. They should have called it the Three-Day War.

Operation Wall Guardians in May 2021. That’s a really poor translation.

“I remember watching it on TV and offering unsolicited opinions to my colleagues.”

“Ah wait. What about Operation Black Belt in November 2019?” I say. This one really has potential. There were missiles fired at central Israel, I was in the bomb shelter with my wife and two sons. If that doesn’t qualify me as a PTSD sufferer, if that isn’t an “incident,” I don’t what is!

“Did you or your property suffer any damage?”

“EMOTIONAL DAMAGE!” Not sure why I yelled, but the whole line of questioning is starting to get to me.

We live in a nation founded on the ashes of six million of our ancestors. We are reminded of the atrocities of the Holocaust not just on Holocaust Remembrance Day, but in the faces of parents and grandparents. We’re flown to Poland in high school to see and touch the horrors of Auschwitz and we’re literally still healing the generational trauma, some 80 years later. So there’s that.

“I don’t think the doctor can approve the permit on those grounds.” He says.

He’s getting desperate. We’ve been on the phone for a good 10 minutes, eight of which have been my unhinged ramblings about the state of mental health in Israel.

I’ve tried to get medicinal marijuana for years, I tell him. And I recount the hundreds of hours feigning issues in poorly lit Kupat Holim psychiatrist’s office and only getting super-addictive opioids instead. Oh, you want medicinal marijuana for anxiety and stress? Best I can do is Klonopin mixed with Xanax. You’ll also need these pills to pee. And these will make sure you get an erection. Oh, and these… not sure why you need them but just take them to be on the safe side.

I’m filming a music video for a famous Israeli singer in a small moshav called Ha’Ogen, or, The Anchor. There’s a well-known recording studio there and in between takes, I sit with the engineer. He lights up a joint and I breathe in the second hand smoke triumphantly.

He smiles through the curls in his hair and raises his hand.

“All I had to do was lose these guys in Cast Lead!” No index and no middle finger.

I wait by my phone. The conference call is scheduled for 1 p.m. and I need to get my story straight.

I research minor-to-medium sized incidents in Jerusalem, cross-reference these incidents with my own whereabouts and try to build a convincing narrative that would place me in the crosshairs of a security incident that would qualify me for a medicinal marijuana license.

“Hello, is this Mr. Gilbert?” I hear the familiar voice say.

“This is Dr. __. Can you please tell her about the incident?”

I clear my throat. It’s an epic tale, full of drama, hope and redemption. It’s a goddamn Netflix original and some of it is actually true.

“It all started in Jerusalem…” I begin, channeling my best David Attenborough and before I could regale them with the epic saga that would put Fauda to shame, the doctor cuts me off.

I never got to complete the story but I did get a license for medicinal marijuana three days later, with the stated reason being: Post Traumatic Stress Disorder.

This video was produced while under the healing properties of medicinal marijuana. Can you dig it?

About the Author
Jason Fredric Gilbert is a film and music video director, published author and acclaimed parallel parker; His Independent Film,"'The Coat Room" won "Best in Fest" at the 2006 Portland Underground Film Festival. He is also the author of two books of screenplays, "Miss Carriage House" and the follow up collection of screenplays "Reclining Nude & The Spirit of Enterprise" He currently lives in Or Yehuda and solves crossword puzzles in the bathroom. Please slap him in the face if you see him.
Related Topics
Related Posts