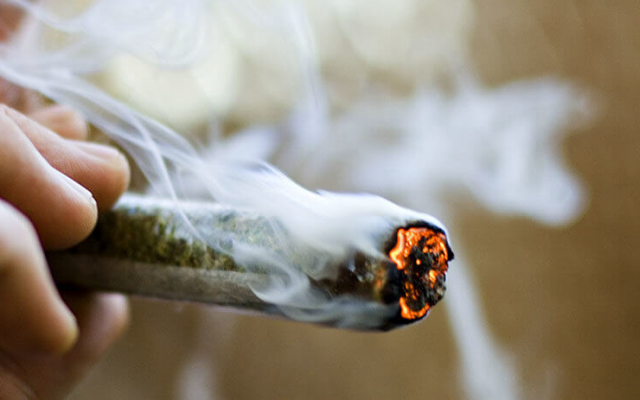 (For illustrative purposes only)

Dear weed lovers of Israel: You are currently the targets of a tremendous political trick whose consequences, if successful, would be devastating to the country. If you fall for it by supporting Moshe Feiglin in the April election, the last thing you will get is legalized pot.

So for the love of Bob Marley, put down that joint and focus on a cautionary tale.

The 2015 election featured its own machination in which former Likud figure Moshe Kahlon managed to cast himself as just another nice guy with cropped hair and a goofy smile who wants lower housing costs. He ended up raking in 10 seats for an overnight party he called Kulanu (All of Us). Surveys showed his support came largely from people who did not want Benjamin Netanyahu to stay prime minister.

Kahlon managed this feat by pretending the big political issues were not his concern. He was all about “social” issues young families might care about. People with children to raise who had more on their minds than peace negotiations or human rights. The deeper message was that these other issues were not really as important as scheming interested parties would have you believe.

A few days before the election his then-associate Yoav Galant (by now a Likud Knesset member-in-waiting) said on the radio that he “assumed” Kulanu would link forces post-balloting with Yitzhak Herzog of the center-left opposition Labor Party (weirdly rebranded the Zionist Union). That was one of many hints to suggest that Kulanu was not really a right-wing party. Social justice is their only dream, you see.

As we know Likud edged ahead of the Union through a variety of late maneuvers including a disgracefully racist one in which Netanyahu managed to turn out his base on the evening of balloting with a video in which he hysterically agitated that “the Arabs” are being bused in droves to the polls and must be balanced by Jewish patriots. Truly, a mortification that should exclude a person from civilized society.

Despite it all, Likud and the parties openly allied with it fell short of a majority, winning 57 seats to the opposition’s 53. Kulanu’s 10 seats, if you are as gullible as many of his voters, appeared to be the balance of power. Kahlon had the choice of blocking Netanyahu and becoming finance minister (or anything he wanted) under Herzog. The nation was about to hold its breath but never got a chance to – because that’s how fast Kahlon handed his 10 seats to the prime minister, giving the right a majority of 67.

During the campaign Kahlon had promised that the next government “will be neither right nor left” but rather one devoted to his precious social issues. Rather than this, though, because of him Israel has enjoyed the most nationalist government in its history, which is saying quite a bit.

Netanyahu has presided over legislation legalizing the “appropriation” of West Bank land from Palestinians for Jewish settlements and a law shamelessly downgrading the status of the 20% of Israelis who are not Jews. He stymied efforts to draft ultra-Orthodox dodgers and cause their haredi schools to teach modern subjects such as to turn out employable citizens. The government moved to curb foreign funding of NGOs (like in Russia) and has tried to rein in the courts and the press, even attempting (before abandoning it) a law linking state funding of the arts to “loyalty.”

They have systematically demonized the police and judiciary while defending a series of spectacular corruption scandals against the PM and various sordid cronies. They have badly unsettled relations with the US Democratic Party and the majority of US Jews who are not right-wing while coddling ultra-nationalist (and crypto-anti-Semitic) leaders elsewhere. And most catastrophically they have continued the settlement enterprise in the West Bank, inching Israel closer every day to either an apartheid state or down the road a binational one that will never know a day of peace (and should be the last thing a rational Jewish nationalist might want).

This is what the left-leaning saps who voted for Kahlon did.

Today this confidence trick is failing because Kahlon has been thusly exposed (and no, housing costs have not gone down). Polls show Kulanu may not even get the 4 seat minimum needed to make the Knesset at all.

So now here comes Moshe Feiglin, with an updated contrivance so brazen and preposterous that it cannot but be admired.

Those who are old enough will remember this other Moshe as the ultra-religious and fanatically nationalist then-young firebrand who in the 1990s led an activist group called Zu Artzeinu (This Is Our Land) dedicated to agitating against the Oslo Accords and Yitzhak Rabin.

The group was founded immediately after the accords were signed, not as a reaction to terrorism but in opposition to the very idea of foregoing any of the biblical land of Israel (which Feiglin still opposes). It was a very effective player in whipping up the rabid hysteria of those days (while claiming non-violence and also making a sport of blocking highway intersections) and after Rabin’s assassination Feiglin was jailed for sedition.

He later emerged as an effective recruiter of support for Likud, ran for the party’s leadership and served in the Knesset for it from 2013 to 2015, of course opposing any peace efforts. From the Olympus of Feiglin’s right-wing conviction he even viewed Netanyahu as a puppet of the left.

Feiglin now heads the Zehut (Identity) party. His platform  includes destruction of the Palestinians’ autonomy setup, annexation of the West Bank, “assistance” for Arabs wishing to leave for other countries and moving the government to areas adjacent to the Temple Mount, perhaps the most combustible place on earth.  But instead of focusing on these trifles, in meetings with secular youth he talks about financial and other freedoms, even separation of religion and state, and of late supports the legalization of cannabis.

I have had numerous recent conservations with red-eyed but strangely intense young people considering a vote for Zehut, because the Aleh Yarok (Green Leaf) single issue pro-weed party has dropped out of the race. That party received almost enough for two seats in 2015, missing the threshold and presumably wasting these votes for the left. It seems this helps account for a rise in Zehut’s support: in this weekend’s Haaretz poll Feiglin finally passes the threshold with four seats and holds the balance of power.

Does anyone doubt what Feiglin would do with such power? Can anyone possibly be naive enough to believe he will back the center-left, where many lawmakers would actually support legalization of cannabis due to a genuinely liberal world view? Can a person truly expect legalized marijuana to arrive courtesy of another medieval Netanyahu coalition? If enough in fact do vote for this legerdemain to work, I may have a used car to sell one of them on my way to the airport.