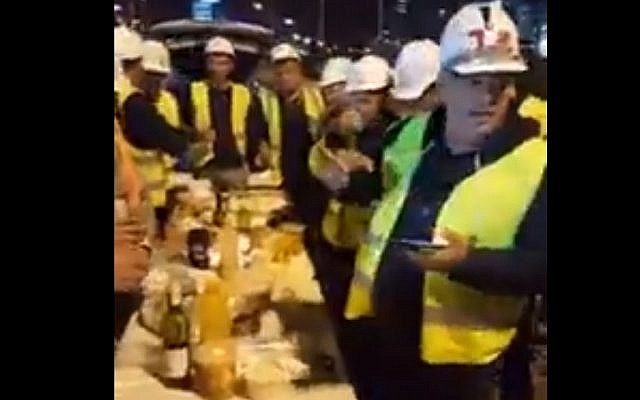 This past Sunday, a video circulated on social media of construction workers building the massive Yehudit pedestrian bridge in Tel Aviv. It was Friday night, and the workers momentarily stopped work to recite the Kiddush prayer and to partake in the Shabbat meal. These workers were in the middle of a controversial project. In a seeming violation of status quo agreements and in order to not disrupt the regular weekday flow of traffic on the major Tel Aviv freeway, the court allowed the municipality to permit work on the Sabbath.

As the Torah points out, work on the Sabbath is one of the most severe prohibitions. But that is not all there is to the day of rest.

Remember the day of Shabbat to sanctify it‏. Six days you shall labor and do all your work, but the seventh day is a sabbath of the LORD your God: you shall not do any work… For in six days the LORD made heaven, earth and sea, and all that is in them, and He rested on the seventh day; therefore the LORD blessed the sabbath day and made it holy. (Exodus 20:7-11)

The Sages taught [with regard to the verse:] “Remember the day of Shabbat to sanctify it” (Exodus 20:7): Remember it over wine, through the recitation of kiddush. (Talmud Pesachim 106a)

As an Orthodox rabbi, as an observant Jew, as a lover of the Torah, I should be shocked and dismayed at the events of last week. For traditionalists like myself to see Jewish workers in Israel publicly violating Shabbat is cause for great consternation. I should cry out in anger and sorrow. But I’m not. And here’s why.

Part of the criticism leveled by religious anti-Zionists was that by creating a Jewish state, Jews would build the country by violating Jewish law — like desecrating the Sabbath. According to the Talmud, violation of the Shabbat is akin to idolatry, the ultimate desecration of Jewish tradition. As Rashi explains, “one who worships idols denies God, while one who desecrates the Sabbath denies God’s act of creation” (Hullin 5a). Indeed, even a secular thinker such as Ahad Ha’am (Asher Zvi Hirsch Ginsberg) understood that “more than Jews have kept the Sabbath, the Sabbath has kept Jews.” So here is the source of my ambivalence.

During the early days of the Reform movement in Europe, traditionalists confronted what they viewed as a paradox. According to Jewish law and tradition, Sabbath violators are disqualified for participation in certain Jewish communal functions and are treated as quasi-idolaters. This is the view of the Talmud and codes. The reason is simple. As Rashi (quoted above) points out, these transgressors denied God’s act of creation as specified in the fourth commandment. The same commandment traditional synagogues throughout the world read about last week — ironically, the same week that the workers caught on video were reciting Kiddush. So, the construction workers praised God for the Sabbath in the midst of their work to violate that very Sabbath. This irony, of course, is not new.

In a pioneering responsum, Rabbi Jacob Ettlinger (1798 – 1871) confronted this contradiction:

I don’t know how to rule regarding Jewish transgressors in our times. Through our great sins, … the Jewish people … consider it permissible to violate the Sabbath…yet, many pray the Sabbath prayers and recite Kiddush …Indeed, a Sabbath transgressor is viewed as a heretic simply because one who denies the [sanctity of the] Sabbath denies [God’s] creation of the world and the Creator. Yet, these people acknowledge God through prayer and Kiddush…(Binyan Tzion New Series No. 23)

To be sure, Rabbi Ettlinger entitles this section of responsa as only theoretical; he presents both the traditional position to treat violators as idolaters, as well as suggests taking a more lenient view of these transgressors who praise God. In his wake, authorities such as Rabbi David Tzvi Hoffman and others found ways to accommodate those who do not follow the laws of the Sabbath, yet still connect to it. Even the architect of Israeli Haredi Judaism, Rabbi Avrohom Yeshaya Karelitz, found that the old way of pushing transgressors away was no longer ideal. (See Hazon Ish, Yoreh Deah 2:16)

So, what of our Kiddush-reciting construction workers? Many might raise an eyebrow at what I am about to say. For is it not my role as an Orthodox rabbi to lament the sorry state of Judaism in Israel? Maybe. Indeed, the building of the bridge on Shabbat pains me; however, the video also evokes a feeling of joy and pride.

Here’s the point. Because, you see, although I don’t know any of these workers, in a way I know a lot about them.

Many years ago, I went to hear the dynamic and controversial Rabbi David Hartman speak. He described one of his early experiences in Israel. Staying in Tel Aviv for Shabbat, he decided to take a Shabbat walk along the beach. Needless to say, the sunbathers blanketed the shore. At first, he said, he was troubled and even angry. Here are Jews openly and brazenly ignoring Shabbat.

After a moment of reflection, however, he came to an epiphany. Where do these Israelis come from? Who were their ancestors? Some, probably, hailed from old Jewish families who could trace their lineage in Israel back many generations. However, many of those on the beach that day in Tel Aviv probably could not. They came from French and Hungarian Holocaust survivors, Russians who suffered life in the Pale of Settlement or Siberian gulag, survivors of pogroms in Poland. Some were probably descendants of Tunisians who fled the Nazis, or Syrians and Iraqis who were driven from their homes in the wake of the founding of Israel. You see, almost every Jew descends from those who at some point were driven from lands across the world or were victims of the worst persecutions. And now, despite it all, they are alive and building the Jewish world.

One can ask, is there any value in the Kiddush of those in the midst of desecrating the Sabbath? Doesn’t Rabbi Yosef Karo conclude, following the Talmud and Rambam, that “one who eats prohibited food… doesn’t bless before or after,” for such a blessing is no blessing at all but blasphemy? A technical question might arise regarding the recitation of Kiddush in the middle of an on-going construction site, and of course the halachic texts require in-depth analysis; however, as Rav Aharon Lichtenstein once wrote, “Can anyone responsibly state that it is better for a marginal Jew in Dallas or Dubuque to lose his religious identity altogether than drive to his temple [on Shabbat]?” Or in our context, I would word it: “Can anyone responsibly state…that it was better for the workers not to say Kiddush?”

I would go even further.

A story is told of the famed Hasidic master Rabbi Levi Yitzchak of Berditchev. The rabbi was once walking on the way and saw a wagon driver wearing tallit and tefillin, saying his morning prayers while greasing the wheels on his wagon. One student exclaimed in shock that this was wrong. He shouldn’t wear tallit and tefillin and pray with grease all over himself. It is against Jewish law. Legend has it that Rabbi Levi Yitzchak lifted his arms to the sky and turned his eyes heavenward proclaiming, “Lord of the Universe, how great are your people Israel, that even when they are working and their hands are full of grease, they sing Your praises.”

Even when they are doing what they are not supposed to, they sanctify the Sabbath by singing Your praises in Kiddush.

What was additionally striking about this video was the timing.  It was released on social media this past Sunday, which happened to have been International Holocaust Remembrance Day. The day when the world mourns the murder of millions of Jews and attempted annihilation of our entire people. That is the day that I saw Jewish construction workers, taking time out of their work building a bridge for the multitude of Jews who survived and thrived, after the furnaces of Auschwitz.

So yes, I wish the bridge were not being built on Shabbat and that all of Israel would follow Ahad Ha’am’s advice, as it were, and keep the Sabbath. However, seeing the remnant of the Jewish people, after millennia of destruction, living, growing, and praising God, how can one not be filled with joy!