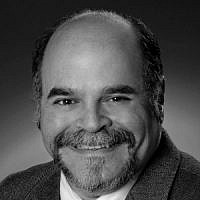 The Blogs
David Greenspoon
Serving the National Capital area and beyond.
Apply for a Blog
Please note that the posts on The Blogs are contributed by third parties. The opinions, facts and any media content in them are presented solely by the authors, and neither The Times of Israel nor its partners assume any responsibility for them. Please contact us in case of abuse. In case of abuse,
Report this post.

What then is the power of Purim that its lesson needs to be maintained even in the Messianic Age? The ancient sages offer us an insight of utopian realpolitik. Rabbi Abahu asserted that in the Messianic era to come, even all the Torah’s Pilgrimage Festivals will be annulled but yet the minor feast of Purim will be retained. (Midrash Mishle 9) How does a late biblical feast merit this honor when the Torah’s Festivals do not?

Some might point to the few mitzvot the Scroll of Esther obligates for us for an answer. The retelling of the story, the exchange of gifts with friends, and tzedaqah for the needy are acts that transcend time and place. Even in the Messianic Age, retelling this powerful story of redemption from genocide, the need to keep our relationships with each other activated, and acts of support to those in need will still be meaningful and important. The truths in this statement are unassailable, yet this answer is still unsatisfying to me.

After all, the story of Purim is one of upheaval and reversal. These themes run throughout the storyline. With the reversal of Haman’s fortune, the Scroll of Esther makes clear the Persian fear of Jewish power in general, and in particular Mordechai’s power. At the end of the story, the Jews emerged victorious. No longer the targets of a state-supported genocide, they preemptively carried out summary justice against their would-be murderers. The household of the leading genocidal demagogue, 800 of his supporters in Shushan, and another reported 75,000 identified enemies of the Jewish people throughout the rest of the empire were executed over the course of days. Then, despite the authority to do so, the Jews demurred from exercising their rights for war prizes. They left aside all the personal wealth of their enemies. How ironic; after all, Haman pledged a royal fortune for the license to kill Jews. In turn, the Jews left a royal fortune behind, despite having every right to claim it.

There is a vital message and lesson here. Even as their swords were bloodied by the necessary violence to save Jewish lives, the morality of the Persian Jews was unsullied. They did not undermine the righteousness of their cause by deploying violence for their own personal enrichment. Their exercise of power was focused, constrained, and even understated.

It is this message about political power that is so important. This is especially salient given Prime Minister Netanyahu’s recent overtures to and inclusion of Itamar Ben Gvir from the racist Otzmah into the Coalition, even absent a Cabinet position. This desperate move to retain his personal political power is not simply troubling. It is antithetical to the values held by the larger Jewish world.

So, to our original question: The restoration of an idealized political and religious structure in Israel the messianic age might underscore Rabbi Abahu’s surprising statement in the midrash. Purim will continue to exist in the messianic age because the Scroll of Esther models a standard of behavior as a politically and militarily empowered community: in fighting the enemies who would destroy us, we need to ensure our values protect us from becoming them. Why win the battle only to lose the war? Do we really want to see our holy, blue tzitzit on fascist, brown shirts? And if that challenge is true in the Messianic era, how much more so it is for us in our imperfect, unredeemed world.

The message, perhaps even the warning, for us from the Scroll of Esther and the midrash is clear: “Jewish Power” must be a moral power. Anything else is a desecration of God’s name.