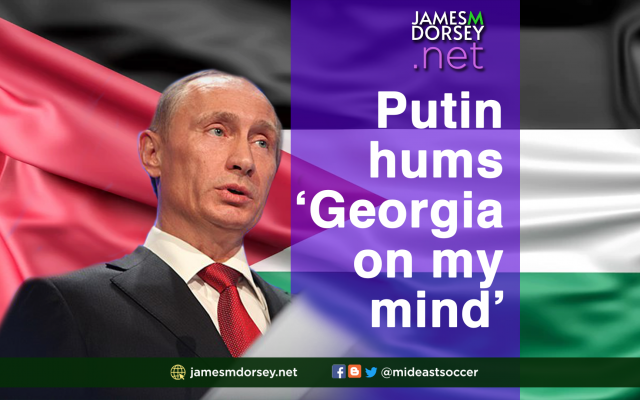 What did Russian President Vladimir Putin think when he ordered his troops into Ukraine? Ray Charles’ ‘Georgia on mind’ must have been humming in his head.

A slightly altered version, ‘Palestine on my mind,’ was undoubtedly on Egyptian athlete Ali Farag’s mind when he condemned the Russian invasion of Ukraine on Sunday as he won Britain’s Optacia squash championship.

“We’ve never been allowed to speak about politics in sports, but all of a sudden, it’s allowed. I hope people look at oppression everywhere around the world. Palestinians have been going through that for the past 74 years,” Mr. Farag, the world’s number two player, said in his acceptance remarks.

It was Yemen that New York Times sports reporter Tariq Panja thought of when he tweeted as British Prime Minister Boris Johnson prepared to visit Saudi Arabia. Mr. Johnson hopes to persuade the kingdom to increase its oil production to compensate for a loss of access to Russian energy due to the Ukraine crisis.

Invariably, comparisons hink. To be sure, unlike Russia, Saudi Arabia was invited by the internationally recognised government of Yemen even if that was more of a formality and changes little on the ground while Israel’s conquest of the West Bank was not, like Ukraine, an unprovoked attack.

Like the 1990 Kuwaiti invasion of Iraq, Ukraine has provoked widespread international condemnation.

Yet, the international community’s response to Saudi Arabia’s seven-year-old invasion of Yemen, sparking one of the world’s worst humanitarian crises, and Israel’s 55-year long occupation of the West Bank’s, the world’s longest of neighboring lands, as well as its blockade of Gaza, has been far more muted, if not supportive.

Messrs. Farag and Panja’s point takes of added relevance given the fact that Mr. Putin has given a new lease on life to those that identify with the construct of the values of the West.

Yet, Saudi Arabia and Israel, just like Poland, Hungary, and Turkey, troubled democracies with tarnished rights records that nonetheless support Ukraine, show that the application of those principles and values will inevitably be spotty and contradictory and involve uncomfortable and glaring compromises.

None of that legitimises the actions of those who opportunistically are left off the hook.

Mr. Panja correctly highlights the irony that autocratic Saudi Crown Prince Mohammed bin Salman who ordered the invasion of Yemen shortly after coming to office in 2015, is being asked to help clean up a mess created by an invasion launched by another autocrat Mr. Putin.

To drive home the point of messy and questionable compromises, Saudi Arabia executed days before Mr. Johnson’s expected arrival 81 people convicted of a variety of crimes, including murder and membership of a militant group. Those executed also included a fair number of Shiite activists. It was the largest mass execution in the kingdom’s modern history.

Similarly, Mr. Farag raised a valid point even if his statement was problematic. Rather than referring to continuous violations of international law associated with Israel’s occupation of the West Bank and blockade of Gaza, Mr. Farag equated the establishment of the State of Israel in 1948 with the Russian invasion. In doing so, he questioned Israel’s right to exist rather than its continued control of lands designated as occupied and Palestinian in the international community’s mind.

Mr. Farag’s statement and the refusal by international sports associations, national leagues, clubs, and event organizers to allow Russian and Belarus athletes and teams to compete under their national flags laid bare hypocrisy and deliberately maintained fictions in the sports world.

Few will take issue with the rejection, yet it blasts a crater into the sports world’s fictional insistence that sport and politics are separate and never should the two intertwine. If anything, Ukraine put that fiction to bed.

Mr. Farag noted as much when he said that his statement was possible because the ban on athletes expressing themselves politically during sporting events was effectively lifted when it comes to Ukraine.

That leaves the question of why Ukraine but not Yemen or Palestine or, for that matter, the brutal repression of Turkic Muslims in China.

It comes as little surprise then that Mr. Putin may hum ‘Georgia, on my mind’ while others hum ‘Yemen and Palestine on my mind.’

To watch a video version of this story please click here.