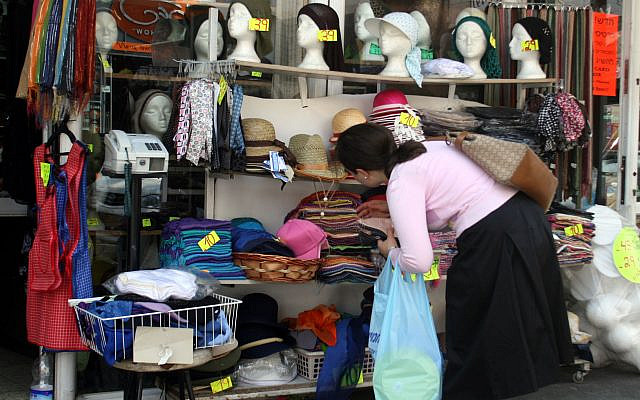 Illustrative. A young woman chooses from a selection of headcoverings worn by ultra-Orthodox Jewish women, once they are married. June 6, 2008. (Lara Savage/ Flash 90/File)

You could be forgiven for never having heard of MK Alex Kushnir. He is seventh on the Yisrael Beytenu list and has only been in Knesset since September.

The fact that most people have never heard of him is probably the reason he decided to make a campaign video. He wants to be reelected in March and wants everyone to know his name. Although this has not been widely covered in the English media, the Hebrew news sites for the past day have given him lots of the attention he craves.

However, his tactic to become famous appears to me to be straight out of the anti-Semite’s handbook. Once upon a time, Jews were falsely accused of blood libel – of murdering Christian children. Kushnir goes one better and falsely accuses religious Jews of undermining the entire Israeli health system, putting lives at risk.

In the video shared to his Twitter account (he’s subsequently deleted the tweet), Kushnir claims that when a rabbi is asked a niddah (laws of family purity) question and is unsure whether a woman is ritually pure or impure, he is able to give her a referral to take to a nurse, so that the nurse can examine the questioner so the rabbi can make his ruling. He also says that the rabbis are able to get immediate appointments for the women.

He stresses that this service is subsidized by the rest of the country, and that there are not enough hospital beds for patients because health funds are being used for halakhic reasons.

He then suggests that perhaps the next step will be sending people for colonoscopies to see if they’ve eaten kosher food or stopping people in the street to check they have been circumcised.

We are all used to politicians telling lies in the run up to elections (and usually the rest of the time too) and parliamentarians inciting hatred has unfortunately become routine in Israel. But Kushnir’s lie needs to be strongly rejected because it is literally endangering lives.

First, I want to stress that there is absolutely no truth to anything Kushnir says on this matter. Rabbis do not issue hospital referrals. They cannot get appointments immediately for anyone. There are some rabbis who sometimes send women to see a nurse purely for religious reasons, but it is a private arrangement, not through the kupat cholim system. This entire tale is fabricated from beginning to end.

However, it is much worse than that.

Because rabbis do occasionally send women straight to the hospital. When they suspect there is a serious medical issue that needs to be dealt with immediately. I’ve heard of many cases when rabbis potentially saved lives of women by sending them to a nurse or doctor instead of making a halakhic ruling.

And this is crucial.

Unfortunately, there are some parts of the ultra-Orthodox world where women do not get the health care information that could help them. In that society, it is the rabbis who play an important medical role. And while this is a terrible state of affairs, and one which most rabbis are not equipped to handle, when Kushnir mocks it in his election campaign, he literally endangers the lives of those women.

Even a parliamentarian with only three months experience should know better. Telling lies has become normal. Inciting hatred is often the tactic of choice. But putting the lives of women at risk to earn a few more votes sets a new low for election campaigns.