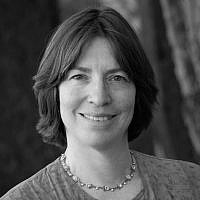 The Blogs
Naamah Kelman
Apply for a Blog
Advertisement
Please note that the posts on The Blogs are contributed by third parties. The opinions, facts and any media content in them are presented solely by the authors, and neither The Times of Israel nor its partners assume any responsibility for them. Please contact us in case of abuse. In case of abuse,
Report this post.

Where to start, at the beginning or at the end?

Of course it starts even longer ago, somewhere in the Sixteenth Century when a crazy group of mystics set out to watch the sunset and welcome Shabbat on the hills of Tzefat. Or maybe even 100 years ago, when Hebrew poet Chaim Nachman Bialik of seaside Odessa is dreaming of a new seaside city on the Mediterranean where Shabbat will be reclaimed and re-defined.

Arriving at these same shores in 1976, headed for a Shomer Haztair Kibbutz to improve my Hebrew, I encountered a real secular Shabbat. Something has happened to Israel since those days of black and white, Orthodox/Secular; Ashkenazi/Sepharadi. There is more fusion than before. There is more openness, curiosity and willingness to experience.

At the height (or depth) of the war, the citizens of the South were offered a respite in Jerusalem. A group of mostly middle-age and older couples from the Moshavim (the working and middle class) joined a Kabbalat Shabbat of a new community in one of Jerusalem’s more affluent and liberal neighborhoods. They were joined by women and children from the local battered women’s shelter; many of them were Ethiopian.
We are an intimate group of maybe 30 people and together, led by a warm and inviting Reform rabbinic student we sing; mostly the Israeli Shabbat “songbook” that is liturgical and prayerful but not in any way traditional prayer, with two exceptions for traditional prayer. Our political differences dissolve, and there are many. We all hold onto this moment as a respite.

“May just two missiles be fired at the two leaders of Hamas; at them and only at them,” whispers the gentleman sitting next to me. Here was a man who had been living under the barrage of fire in both directions for weeks. I wonder what he thought when we actually did strike at these leaders taking many innocents with them.

The War is over, it is the last chance to bless our children before they return to school. I am sitting in the heart of the Hefer Valley, surrounded by venerable Kibbutzim and moshavim. These are the children and grandchildren of the pioneers, many sailed from that port of Odessa (where Bialik had been) to establish a new Israel, firmly planted in the ground, rooted in the images of the Bible.

Some 500 descendants have gathered at the banks of the Alexander Stream, sitting under a giant Eucalyptus tree. An ensemble of musicians, “prayer” leaders (including a Liberal woman rabbi, who does not introduce herself as such) and one well-known local boy rock star, lead us in this late afternoon Kabbalat Shabbat.

We start early enough so that those who need to get back to their traditional synagogues will have ample time and others will join family and friends for dinner. Here too, we will sing Israeli standards, with Kiddush included, but that is one of the few nods to tradition.

The rock star, Chemi Rudner, tells us about his grandparents, he declares himself a “Zionist,” and then he sings a Naomi Shemer standard that send chills through us all, Under the Eucalyptus Tree, and we are transported back and forth; to those naïve days of the founding fathers and mothers. It is both nostalgic and wistful, as the rabbi reads a lovely bracha for our children entering first grade. Can we possibly sustain this innocence in our wish for a world of peace and possibility?

Tel Aviv, the first Hebrew city that never sleeps, at least nowadays. Congregation Beit Tefillah Yisraeli is celebrating a decade since its founding. Friday night at the port has become iconic, hundreds flock to join a musical Tefillah.

This Kabbalat Shabbat is built on the tradition with additions from contemporary songs and the adaptation of Israeli melodies to the classic prayers. These melodies are the “sights, smells, and beat” of Tel Aviv. Super rock star Shlomo Gronich has composed a new and lively melody for Lecha Dodi, capturing the infectious youthful beat of Tel Aviv.

Tel Aviv mayor Ron Huldai declares this gathering the fulfillment of Bialik’s dreams where thousands will reclaim the public square with a vibrant “renewed Judaism” and he adds that this is Tel Aviv Judaism. Rabbi Esteban Gottfried, along with Rani Yaeger is leading this joyous celebration with over 1500 people present. When spontaneous prayers of thanksgiving are requested from the crowd: one woman thanks our soldiers; a soldier thanks the citizens of Israel, a mother thanks all the teachers preparing to start school. Yes, there is so much to be thankful for.

The refurbished train station in Jerusalem has become the site for a new and pluralistic Kabbalat Shabbat. The crowd is very mixed in background and age but it has struck a chord, a place where we can do the “piyutim” from Kabbalat Shabbat with connecting words of torah and kavannah.

Many of the participants will leave when it is over to join their synagogues in this neighborhood that offers many options. But in this space, there is an easy mix of New Age, Orthodox, Reform, North African: a celestial Jerusalem for just one hour every Friday. Keeping in this spirit the leaders change every week.

So my memories this summer blur of who led which Shabbat, but all were heartfelt and centered.

Something has indeed happened in his war weary, politically torn, combustible country. Under the radar, with no official help — or, God-forbid, government money — Israeli Jews want a Shabbat that belongs to more people, that sings in multiple voices, that yearns for peace and co-existence.

With most Kibbutzim privatized, the need for community is finding expression in Kabbalot Shabbat like these. In the big cities, the public sphere now offers more of these pluralistic, open, inclusive, egalitarian experiences. The Israeli counterparts of Reform and Conservative have been midwives to some of these phenomena, are leading others, and the independent communities have also emerged.

What we all share is the building of a bridge to Israelis seeking a local, familiar, rooted harbor out from the sea of uncertainty and anxiety, and a bridge as well to Diaspora Jews hoping to find in Israel a place that feels like home.

About the Author
Rabbi Naamah Kelman is Dean of the Hebrew Union College in Jerusalem. She was the first woman ordained in Israel in 1992, when no Hebrew word existed for the new role for women.
Related Topics
Related Posts
Comments