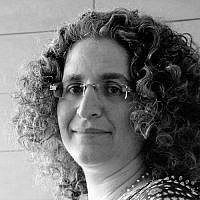 The Blogs
Hagit Ofran
Apply for a Blog
Please note that the posts on The Blogs are contributed by third parties. The opinions, facts and any media content in them are presented solely by the authors, and neither The Times of Israel nor its partners assume any responsibility for them. Please contact us in case of abuse. In case of abuse,
Report this post. 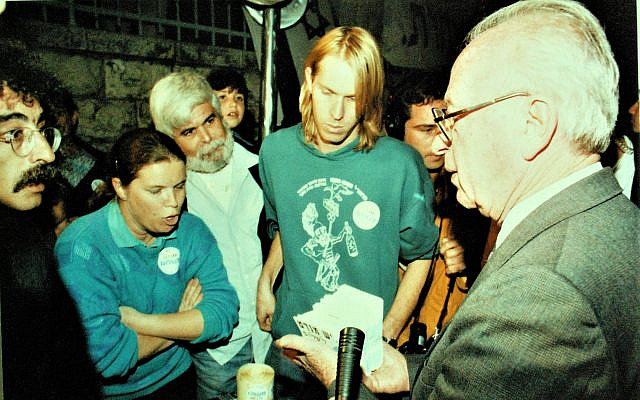 Around two years ago, journalist Barak Ravid published a letter found in the Israel State Archives, in which then spokesman of the settlers’ Yesha Council, Aaron Domb, warned Prime Minister Yitzhak Rabin that his actions might get him murdered. “Unfortunately, lately I’ve been hearing more and more that the only solution for this government… is political assassination.”

The letter was sent in May 1994, about a week after the signing of the Cairo Agreement, also known as the Oslo I Accord or the Gaza-Jericho Agreement. The agreement stipulated that a Palestinian authority would be established in the territories which would manage Palestinians’ daily life starting in Gaza and Jericho, from which the IDF would withdraw. The agreement also stipulated that within five years, by May 1999, a permanent agreement would be signed between the two sides. All the settlements, according to the Cairo Agreement and the Oslo II Agreement that followed, would continue to exist at every intermediate stage. Their final status would be determined by the permanent status agreement.

However, not all of the settlers reacted in similar spirit. A few months before Barak Ravid exposed the letter, a former American diplomat published reflections on the peace process. She described a meeting she had with a settler leader at his office in Psagot, at around the same time the letter was sent. With conviction, the leader told her that the settlers had plans to stop the Oslo process. He showed her maps of bypass roads and infrastructure that he claimed would bring in masses of new settlers and would connect them to Israel proper until the settlements could no longer be evacuated. Apparently, the man knew what he was talking about.

After the Oslo Accords were signed, the Rabin government invested billions of shekels in infrastructure and bypass roads in the settlements. These roads (the Ramallah Bypass, the Tunnels Road (the Bethlehem Bypass), and the Hebron Bypass) became the routes of development for the settlements and led to huge growth. No longer did one have to travel on dangerous, crowded roads between Palestinian towns; fast, convenient roads significantly reduced the commute time between Israel and the settlements and strengthened a sense of security.

One of the remaining unsolved puzzles of Rabin’s image is his attitude towards the settlements. Even before the Oslo Accords, Rabin began his term in 1992 by freezing unprecedented construction in the settlements, including halting projects that were already underway. After the Likud government with Yizhak Shamir as Prime Minister and Ariel Sharon as Housing Minister, when the construction of settlements was as high as 7,000 units per year, Rabin dropped this number to about 1,300 housing units per year, still allowing construction in a small number of settlements. He saw halting settlement construction as an Israeli interest, calling it “changing the national priorities.” This is also the reason he insisted that stopping settlement development would not be one of Israel’s requirements in a treaty; he wanted to emphasize that it was done out of Israeli interest and not as the result of a Palestinian demand.

Netanyahu, who led the fight against the Oslo Accords during Rabin’s term, was elected prime minister after Rabin’s assassination and immediately canceled the freeze on settlement construction. He also began to build dozens of new settlements using the outpost method. Because Rabin ensured that the Oslo Accords did not include an explicit commitment by Israel to freeze settlement construction but instead only the vague wording that “Neither side shall initiate or take any step that will change the status of the West Bank and the Gaza Strip pending the outcome of the permanent status negotiations”, it was relatively easy for Netanyahu to resume construction without being blamed for violating the agreement. The roads that Rabin built served as the necessary infrastructure for settlement expansion during Netanyahu’s term and for many years to come.

Why did Rabin behave this way? It was no conspiracy. Rabin did not plan that the settlements will stay forever. The Oslo Accords were not about establishing the Palestinian Authority as a sort of “subcontractor” for Israel to manage the daily lives of Palestinians. Rabin apparently believed that he would pay too high a political cost for evacuating the settlements. Even without evacuating a single settlement, Rabin still paid with his life for the process he began.

But if he believed that it was better to postpone taking care of the settlements until reaching a permanent agreement, Rabin was mistaken. Ehud Barak, who was elected prime minister in 1999, made the same mistake. In the year 2000 alone, 5,000(!) housing units were built in the settlements. And to tell the truth, even we at Peace Now did not push him enough on the issue of settlement construction because we wanted to support the big picture: reaching a permanent agreement. Even President Obama at a certain point decided to give up on the effort to stop settlement construction and instead invested all efforts in bringing the parties together for negotiations. The construction in settlements flourished.

In the Book of Kings it is said of many kings in their time: “But the high places were not removed.” Even righteous kings failed to keep the people from worshipping and sacrificing to god on the platforms outside the temple. In this spirit, it can be said “but the settlements were not removed,” that Israeli peacekeepers have failed to keep the settlements from growing. In 1993 there were about 110,000 settlers, and today there are 450,000. Now it will be much more difficult to reach a permanent agreement. But if we are desirers of life, if we ever want the possibility of solving the conflict and having two states for two peoples, we must immediately stop construction in the settlements, regardless of negotiations. It is necessary, and it is possible.