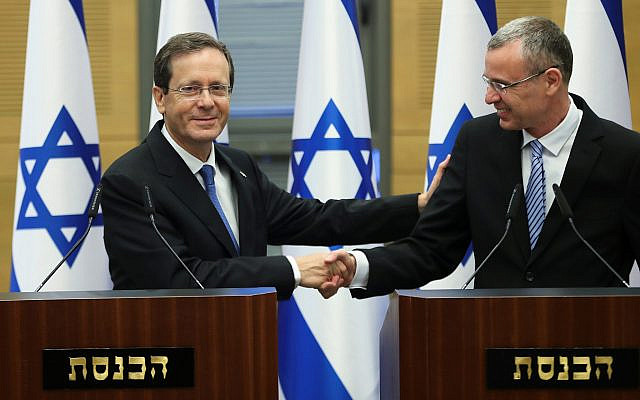 Isaac Bouji Herzog will be the eleventh President of Israel, taking up office in July after the current President, Reuven Rubi Rivlin finishes his seven year tenure of office. Yesterdays vote by the 120 members of the Knesset gave Herzog the largest single majority a President has ever received. In what was a cordial contest between Herzog and his opponent, Miriam Peretz, there was never any real chance that he would lose.  Unlike most previous presidential votes, there was no direct political candidate from amongst the Knesset members, while none of the political parties, including the  largest faction, the Likud headed by Prime Minister Benjamin Netanyahu, put forward a candidate or declared its support for one of the two. The parties all allowed freedom of vote in what is a secret ballot,and Herzog came through  with support from across the political spectrum, from left to right, and from secular to religious.

There were those who suggested that Herzog was the candidate with the silver spoon, given the fact that his father Haim Herzog was President before him (the sixth President) and that is grandfather, Rabbi Isaac Halevy Herzog (after whom he is named) was the first Chief rabbi of the State of Israel. They didn’t need to stop there. Both of Herzogs great grandfathers, Rabbi Shmuel Hillman and Rabbi Yoel Herzog, were two of the most illustrious Lithuanian Rabbis of the early twentieth century, the former filling the position of the head of the London Beth Din for over twenty years before retiring to pre-State Israel in the 1930’s, the latter occupying the posts of Rabbi of Leeds in the UK and of Paris.

Closer to home, two of his uncles were two of Israel’s leading diplomats in the first thirty years of statehood. Dr. Jacob Herzog, the younger brother of President Haim Herzog, was Israels ambassador to Canada when he participated in the famous Herzog-Toynbee debate and was offered the position of Chief Rabbi of Britain and the Commonwealth in the mid 1960’s, which he eventually turned down due to ill health. Another uncle, Abba Eban,  was Israel’s foremost diplomat of the time, the first Ambassador to both the United States and the United Nations, and Foreign Minister during both the Six Day War of 1967 and the Yom Kippur War of 1973. As the new President once jokingly said in an interview, Friday night dinners with his father, Uncle Aubrey and other important guests was never boring, and was just about the best classroom for learning about the intricacies of Israeli, world and Jewish (probably the most difficult of the three) politics and diplomacy.

Privileged it may have been, but not a bad training ground for his new position.

No doubt these family connections helped him take his first steps in the political and diplomatic arena. But no amount of family connections would have helped him if he had not spent the past thirty years in a wide range of public and diplomatic positions, as head of the Labour Party – when it was still a party with a significant number of Knesset seats – , as Minister of Welfare and Minister of Diaspora Affairs in various Israeli government, and in recent years as Chairman of the Jewish Agency.

An Israeli president has two very different functions  – internal and external – to fill and it is rare that a president has been able to fill both of these functions at one and the same time. Internally, an Israeli president has to rise above the ethnic and religious divisions and display an empathy to the entirety of Israeli society. Externally, a president has to be able to represent Israel to the world and to the wider global Jewish community, especially in an era when its Foreign Ministry  has, to a great extent, lost the plot. The incoming president is one of the first who has the necessary skills and knowledge to fill both of these functions, as someone who has been in charge of welfare and poverty issues inside Israel, as well as representing Israel to the Diaspora Jewish communities and to foreign governments.

It is indeed high time that Israel had its first woman President  but Miriam Peretz was not to be the one, despite a great amount of public sympathy for her. Her defeat speech was full of empathy and support for Herzog in a manner which is not common in Israeli politics – where people do not know how to lose with grace. She still has much to offer, and the new President could do worse than coopting her for many important tasks within Israel as she continues to work for the betterment of Israeli society in her unique style. 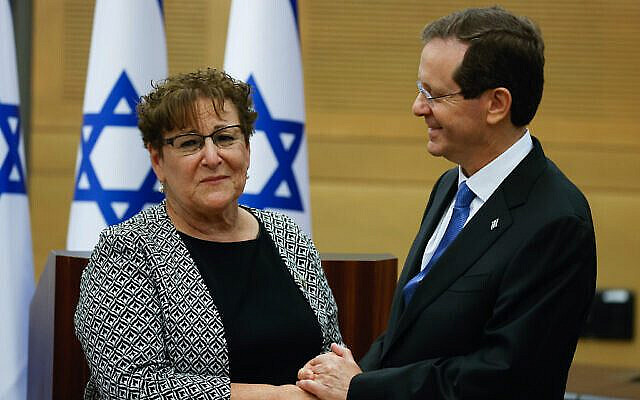 Newly elected Israeli president Isaac Herzog and his wife with Miriam Peretz in the Israeli parliament on the day of the presidential elections, in Jerusalem, June 2, 2021. (Yonatan Sindel/Flash90)

Even by the standards of Israeli politics, it was a crazy day.  Eight political parties, from the far right to the left were actively engaged in last-minute frantic coalition negotiations to put together the new Coalition government before the time run out. They all stopped the negotiations, drove up to Jerusalem to participate in the vote for the new President and, in a rare show of cross-party unity, voted for Herzog, and then immediately returned to Kefar Hamaccabiah to continue the negotiations.   It is to be hoped that the new government will actually succeed in holding out for another week before the Knesset vote takes place, and that one of the new Presidents first jobs will not have to be to preside over the holing of fifth elections in a few months time.

While Rivlin was the first President to have been born in Israel (in pre State mandate), Herzog will be the country’s first President to have been born after the establishment of the State – indeed a full decade (twelve years to be precise) after. He is part of a generation for whom Israel has always been a given and is tuned in to the contemporary challenges facing both Israeli society and World Jewry. Although he served as head of the Labour Party, he is very much a centrist when it comes to Israeli politics and, as evidenced in yesterdays Knesset vote, speaks to a wide range of groups and views across the spectrum.  Even Netanyahu, his fomer political adversary greeted his election warmly, which is a lot more than can be said for the way he actively opposed his own Party member, Rivlin, in the previous Presidential election.

We say a warm farewell to Rubi Rivlin as he leaves the post and equally a warm greeting to Bouji Herzog as he prepares to enter the Presidents residence. If he continues to perform as he has done for the past thirty years in public service, the State of Israel will be blessed by an excellent choice.

Hearing the news while on a short vacation and visiting the Golan whisky distillery in Katzrin, I could do little better than raise a glass of Israel’s finest single malt in honour of the new President. It may not be quite the quality of the Irish whiskey that his grandfather (Rabbi Herzog), or the Scottish single malts that his Great Grandfather (Rabbi Hillman), would have been drinking on the occasion of family and community celebrations, but one of the few whiskies produced locally seems to be the most appropriate way to toast  a President who is also a home grown product and has lived all of his life, in the State of Israel. 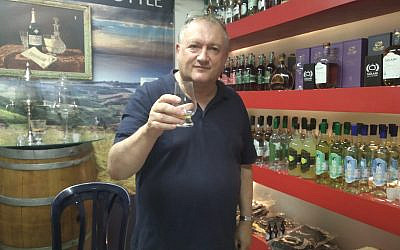 About the Author
David Newman is professor of Geopolitics in the Department of Politics and Government at Ben-Gurion University of the Negev. BIO: David Newman holds the University Research Chair of Geopolitics at Ben-Gurion University, where he founded the Department of Politics and Government, and the Centre for the Study of European Politics and Society (CSEPS) , and served as Dean of the Faculty of Humanities and Social Sciences from 2010-2016. Professor Newman received the OBE in 2013 for his work in promoting scientific cooperation between Israel and the UK. From 1999-2014 he was chief editor of the International Journal of Geopolitics. David Newman moved to Israel from the UK in 1982. In 2017 he was selected as one of the 100 most influential immigrants to Israel from the UK. His work in Geopolitics focuses on the changing functions and roles of borders, and territorial and border issues in Israel / Palestine. For many years Newman was involved in Track II dialogues between Israelis and Palestinians.He has additional research interests in Anglo Jewish history, and is a self declared farbrent Tottenham Yid.
Related Topics
Related Posts
Comments
Advertisement