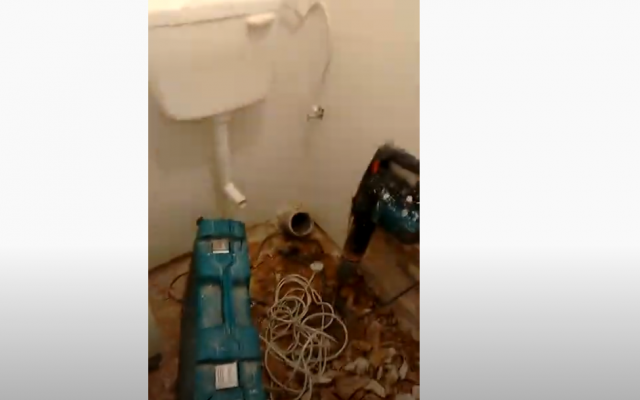 True story: a landlord once ripped out the toilet of an apartment that I was renting. Reimagining aliyah as the quintessential immigrant experience. Screenshot: from author’s YouTUbe.

To the best of my knowledge, research into aliyah — and post-aliyah retention — is a field in its infancy.

Thankfully, that is fast changing.

The literature narrating olim’s experience in Israel — and asking hard questions about why many of them return to their countries of origin — is growing.

Former Ambassador to the US Michael Oren penned an articulate and insightful piece on this website a few days ago. It’s well worth a read.

It laid bare some uncomfortable realities about life in Israel that seem starkly at odds with Zionism, the ideological tenant upon which the State of Israel is founded (indeed they are).

For one, as Oren explains, even within the vaunted halls of the Knesset there is a general apathy towards aliyah — sometimes even a hostility — that runs entirely contrary to the lip service Israeli politicians routinely pay it as an ideal.

To weathered long term olim , inured to the trials and tribulations of life in this quarrel-strewn part of the Middle East, this probably comes as no surprise. To those yet to step on the plane to Israel, however, this fact alone may strike as quite shocking. And rightly so. Because it is.

This shocking attitude on the part of our overpaid and largely unaccountable parliamentarians needs fixing.

Without it, it’s unlikely to expect the kind of concrete policy reforms that Oren argues urgently need enacting.

When there’s a will, there’s a way. And when nobody really cares about aliyah because it’s largely the concern of people without much influence in Israeli society, it’s hardly surprising that issues like these simply languish until we reach a breaking point of rage (see: 2019 Ethiopian protests against police violence).

When it comes to how we, olim, think about aliyah, however, I’d like to suggest that there’s also an attitude that we can adopt.

It’s to stop thinking of aliyah as a unique immigration phenomenon, a message which is heavily pushed by Nefesh b’Nefesh, the Jewish Agency, and just about everybody else who evangelizes the Jewish Diaspora with grand messages about the merits of coming “home” to Israel.

Rather, it’s time to start thinking about aliyah as simply today’s normative Jewish immigrant experience — much as perhaps showing up to Ellis Island from Poland was in the last century.

And when we start conceiving of aliyah through a frame of reference that more closely mirrors its grisly reality, we can do a better job at advancing our shared struggle for a better future in Israel.

Aliyah Is No Exception To The General Law Of Immigration

So I’d like to suggest that it’s high time that we stopped thinking about aliyah as the great exception to The General Law Of Immigration.

Because that’s what we currently largely do think.

We think that because we’re Jewish — and this is a Jewish country founded on Jewish values which we Diasporans and tsabrim share — that our experience as immigrants to Israel will, somehow, be different.

Consistently, generation after generation, we find that it isn’t.

Rather, we find that it’s just about as good — and as bad — as that of Jamaicans showing up as immigrants to New York.

Some of us stay. Some of us return to our countries of origin bearing horror stories about the squalid apartment we rented in Ramat Gan or Tel Aviv. Some of us thrive and manage to climb through the ranks of Israeli society (or at least its high tech world). And some of us don’t.

Many of us, however we end up, report instances of exploitation and discrimination along the way. In a country with stifling defamation laws, and a sizeable population of immigrants who believe that maligning anything about Israel is a religious sin, most of these go unchronicled, the stories exchanged only around informal water coolers.

And those very same crushed expectations are the root cause of huge amounts of heartache and bitterness among those who have found themselves used, abused, and thrown out on the garbage heap of Israeli society. That may not be the majority of olim. But they are a portion of them. And vocal.

No, the General Law isn’t a real thing, by the way. But if it were, it might go something like this:

Aliyah May Achieve A Beautiful And Unique End. But It’s A Gritty, Typical Immigrant Experience Nonetheless.

So aliyah — like Israel in so many respects — is a paradox.

Both unique and commonplace all at the same time. Which — doubly paradoxically — almost makes it somewhat unique.

Aliyah represents the homecoming of the Jewish people to their ancestral homeland, a process of re-self-determination without many (if any) historical parallels. That’s why we, Jews, largely engage in it.

Olim largely move to Israel because they feel an ideological pull to do so; the weight of history, even. It’s a pull migration. Commonly, modern day olim commit to aliyah, and Israel, knowing that it will represent a substantial hit to their financial future and standing in society.

For those truly committed to the ideal, the satisfaction of playing a role in the migration usually mitigate against all the hardships encountered along the way. And so they go through with it anyway.

So while most olim can probably agree that the enterprise of aliyah is lofty and even sacred, that doesn’t mean — I contend — that we need to keep paining ourselves to prop up an image that depicts aliyah as some kind of Zionist fairytale.

Because it’s not. It’s a gritty and jagged immigrant experience — even the quintessential one — undertaken by a heterogeneous group of Diasporan Jews from Addis Ababa, Paris, London, New York, and everywhere in between, to a somewhat dysfunctional and young state in the Middle East.

We don’t speak the same language. We often don’t look the same. And yet we share many of the same challenges.

Rather, aliyah — while unique — is awfully common.

Filled, often, with dodgy employers who forget to make pension contributions (I’ve had that happen); landlords who rip out your toilets while you are paying rent (ditto); and other ugly manifestations of the gritty existence that typifies life as an immigrant the world over.