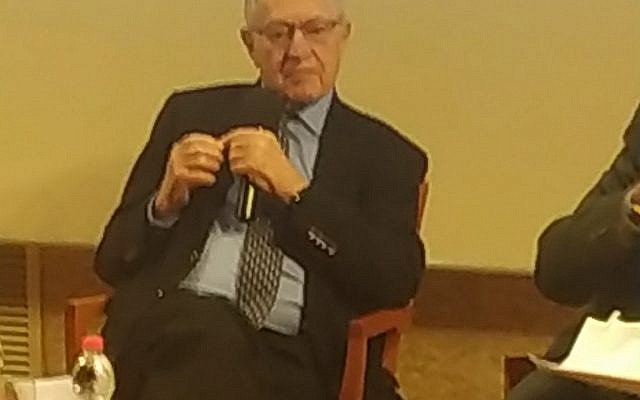 The Jerusalem Center for Public Affairs (JCPA) is an Israeli research institute specializing in public diplomacy and foreign policy founded in 1976.

Its publications include the academic journal Jewish Political Studies Review and the email-distributed Daily Alert, a daily regional news summary.

A core component of the Jerusalem Center for Public Affairs concerns efforts by the Boycott, Divestment, and Sanctions (BDS) movement to delegitimize Israel.

According to the organization’s website, the initiative “is a major multilingual public diplomacy program” which seeks to expose those who undermine Israel’s very legitimacy.

This programme entails reinforcing the connection between “the Jewish people and their historical homeland including Jerusalem.”

Many of the institute’s scholars, including Dan Diker and Ambassador Alan Baker, have published extensively on subjects pertaining to this initiative. This includes Dan Diker’s BDS Unmasked: Radical Roots, Extremist Ends as well as Ambassador Baker’s Palestinian Manipulation of the International Community.

On Wednesday night (02/26/20), the Center sponsored a discussion with Prof. Alan Dershowitz, Felix Frankfurter Professor of Law, Emeritus, of Harvard Law School, Ben-Dro Yemini, Israeli Journalist at Yediot Ahronot, and moderated by Dan Diker, Director of the Program to Counter Political Warfare and BDS at the JCPA on Dan Diker’s new book, “Israelophobia: The Dangerous Dance between BDS and Anti-Semitism.

The program was held at Mishenot Sha’ananim Conference Center.

Dan, as the primary author of the new book, moderated the discussion. Professor Dershowitz, who contributed to the book with one of its chapters handled most of the points and Ben-Dror Yemini held his own in the discussion.

Ben-Dror pointed out that much of the Anti-Israel Anti-Semitism comes from our own Israeli Professors who work oversees at many major colleges, in both their regular programs, but especially in the Colleges Jewish Studies programs.

He gave the simile of the Talking Dog. Because of the fact that not too many dogs talk, when one does he is special. Many of these professors in these oversees colleges, make it their bread and butter to attack Israel.

Since they are Jewish and Israeli themselves, they feel they have the right to do so and because they are “talking dogs” they get a job and important status at the Universities where they work. Ben-Dror felt these Israeli traitors were as important as the Anti-Semitic and Anti-Israel American Colleges that have crossed a line in the modern world.

Professor Dershowitz talked of his long history in fighting Anti-Semitism. As a liberal Democrat, he is like a fish out of water, among his peers. As he was a main participant in the recent Trump Impeachment trial, he is now considered a traitor to the Anti-Trump Jewish media and establishment. His wife and daughter are shunned because he had the audacity to Support Trump in his Impeachment fight.

Professor Dershowitz warned, that his experience has taught him that the world has become so polarized that no one looks at the arguments anymore, they just advocate by insulting the other party. This is especially difficult for Israel and Jews, because we rely on Truth to win our arguments. Once emotion takes over, we no longer will be to defend ourselves.

For that reason, he said we have to not rely on the US always having our back and we have to be able to defend ourselves.

Since the subject of Boycotts and BDS came up, this joke is appropriate:

A rabbi is walking down the street in New York when he is shocked by a sign hanging in front of a building.

The sign reads, “WE WOULD RATHER DO BUSINESS WITH 1000 HAMAS TERRORISTS THAN WITH ONE SINGLE ISRAELI”

Enraged, the rabbi walks up to the building to go inside and yell at the owners, but he is stopped by a smaller sign saying, “THE CHEVRA KADISHA (Hebrew Burial Society).”