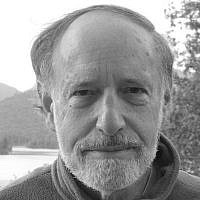 The Blogs
Mark Hoffman
Apply for a Blog
Advertisement
Please note that the posts on The Blogs are contributed by third parties. The opinions, facts and any media content in them are presented solely by the authors, and neither The Times of Israel nor its partners assume any responsibility for them. Please contact us in case of abuse. In case of abuse,
Report this post.

I argued in my last post that Conservative Judaism needs to re-define itself in a way that speaks to the real lives of the majority of American Jews. Instead of simply being the halachic halfway point between Orthodox and Reform Judaism, it should be a cauldron where of all strains and expressions of Jewish life can be experienced by a nation of diverse and independent minded American Jews. A practical consequence of this theoretical shift would be to allow a more open and accepting approach to interfaith couples and families, which now comprise 65 % of Jews who married since 2010.

Subsequent to that posting, I solicited responses to my position from Conservative movement leadership, congregational rabbis, rabbinical students and various Jewish lay persons. What follows is an attempt to continue the conversation.

One Conservative seminary leader asserted that defining Conservative Judaism more pluralistically would result in a reform-ward drift that could be self-defeating because “Reform movement affiliation is also plummeting,” an observation shared by several within Conservative Jewish academia.

However, the Pew Report suggests otherwise. Their survey, reflecting the most recent trends, indicates that 25% of American Jews say they were brought up in Conservative Judaism, yet only 15% currently describe themselves as Conservative Jews. By contrast, 28% say they were raised within Reform Judaism and 33% now identify with the Reform movement. Interestingly, although some point to the strength of Orthodoxy, this group actually showed a slight outflow of self-identified individuals, and still represents the smallest of the major American Jewish denominations.

Given the inherent limitations of even the most rigorous surveys, I attempted to obtain some actual affiliation numbers from the United Synagogue of Conservative Judaism and the Union of Reform Judaism. According to Barry Mael, senior director of operations and affiliations of USCJ, the affiliation numbers are a bit challenging to crunch, but the number of affiliated USCJ synagogues probably dropped from 573 to 552 from 2011 to 2021. He points out that these numbers to some degree reflect mergers, not just closures.  However, it is reasonable to assume that most mergers resulted from non-viability of individual congregations in the face of declining membership. Unfortunately, no information was available regarding age distribution of membership, but the Pew data and anecdotal observations suggest an aging Conservative Jewish membership base.  Unfortunately, URJ did not respond to my inquiries.

Regardless of the survey or affiliation data, others argued that a less restrictive definition of Conservative Judaism would lead to more intermarriage, which is still seen by many as the chief threat to the survival of the American Jewish community. Yet this position presumes that the promulgations of a group of Conservative Jewish leadership will have a meaningful impact on the marital decisions of hundreds of thousands of young Jewish Americans, a presumption that seems to me to be delusional.

In fact, it is highly likely that the growth of the Reform movement over the last 30 years has come largely at the expense of a Conservative movement that has been slow to recognize the inevitability of interfaith marriage and was unable or unwilling to send such families an unequivocal message of loving acceptance.

Conservative Judaism is slowly catching on to the nature and magnitude of this dilemma after much damage has already been done. But as one Conservative congregational rabbi put it, “The Conservative Movement has maneuvered itself into an incoherent position on intermarriage. We propose keruv with the intermarried couple/family but with the intermarrying couple we practice rehuk.” This rabbi proposes a practical fix to the problem: “Allow Conservative rabbis to perform civil marriages.” Yet, is a marriage with a smattering of Jewish traditions performed by a rabbi truly a “civil marriage?” It seems that this rabbi, without so stating, is implicitly accepting, my premise that, at least in terms of interfaith marriage, the way forward is a pluralistic approach that is not based entirely on strict halacha. Furthermore, the civil marriage proposal, in isolation, fails to address the common question of Jewish identify for children of non-Jewish mothers who are raised as Jews.

One movement leader summarizes the dilemma of Conservative Judaism thus: “The movement may collectively choose to be expansive in its vision by embracing a truly diverse set of principles, or it may decide to stay smaller and cede some of this ground to the Reform movement.”  One of the more halachically observant members of my congregation provides his perspective more bluntly: “The reform way is not the right way in my opinion. Those who do not want to stay connected to Judaism, let them go.”

Let them go?  I find this “righteous remnant” argument particularly worrisome. The idea that numbers don’t matter, even if it is relevant, can be true only up to a point. Is a movement without adherents really a movement? And let us think then about who we would be losing. Would it be the next Theodore Hertzl or Albert Einstein? How many among our young people are committed to creating a more just and perfect world, even if they care little about which pot to boil their chickens in? If we can’t find a place for them in our communities, it will be as much our loss as theirs. Moreover, for many of us, it is our own children and grandchildren that will be migrating away from a form of Judaism that they find unwelcoming.

The choice of “staying smaller” would also represent an abandonment of those local lay leaders of Conservative congregations who have devoted much of their lives and livelihoods toward keeping Jewish life alive and who will soon find that they no longer have the critical mass of adherents to comprise a Jewish community.

If “the Reform way” was actually what I was advocating, there would be no point maintaining a separate Conservative movement. We could just merge with Reform. As one commenter put it, “Reform already holds the ground of individual choice and does it very well… Without a halachic principle in place, what need is there for a Conservative movement to exist at all?”

Of course, no religious movement can claim dibs on a particular approach. A strong and resilient movement will learn from the successes and failures of others, whether it be the welcoming of interfaith families by the Reform movement or the Shabbat dinners offered by Chabad. Indeed, the Reform movement demonstrated this resiliency by by transitioning away from some of the extreme anti-traditional positions that it took during much of the twentieth century.  The Conservative movement has a unique opportunity to position itself at the crossroads of Jewish life and offer a diverse menu to potential adherents in an open and loving way that movements at the extremes might find challenging to replicate.  Varying degrees of halachic observance should be one of many ways its adherents could choose to express their Judaism.

Many readers of my last essay might be surprised to learn that my synagogue, guided by the principle of Jewish pluralism, is actually more halachically observant than many or even most other Conservative congregations. While we don’t necessarily see halacha as dogmatically binding, neither do we wish to exclude our more observant congregants by creating an environment in which they cannot practice in the traditional manner that feels Jewishly comfortable for themselves, nor do we want to deprive less observant members of the opportunity to enhance their halachic practice. While there are some practical challenges in creating such an inclusive Jewish environment, the practical challenges may be impossible to overcome if we do not first lessen doctrinal barriers.

While there may be a subset of movement leadership, particularly among the rabbinate, for whom theoretical halachic distinctions are central to to their identity as Conservative Jews, I suspect that most congregants, even among the most active and supportive of their congregations and of the movement, care little about such fine theoretical distinctions. This de-facto reality was acknowledged by one movement leader: “I think the expectation that all of the folks we engage will become observant was put aside by our rabbis long ago.”

Yet this same rabbi asserts, “but the idea that we have a set of norms and principles which guide Jewish life, and especially our religious leadership, is central to our identity.” In response, I would ask, how can such principles be considered normative if few movement adherents actually live by them? One congregational rabbi asserts that such norms are accepted as an “aspiration.” To which I would respond that a more accurate characterization than “aspirational” would be that such norms are practiced selectively, based on individual judgments of American Jews, making personal choices about what makes sense in their lives, the lives of their families and the lives of their communities.

Despite my conviction that a pluralistic approach, in which acceptance of varying degrees of halachic observance may be one of many important ingredients in the Conservative Jewish recipe, I would be ingenuous if I asserted that pluralism and a more open approach to interfaith marriage is the magic ingredient that will carry us to success for generations to come.

The broader problem is expressed by this comment from a Jewish baby boomer: “Much of the decline in Conservative Judaism reflects the general trend in our country of declining membership in religious organizations of all kinds. There is a general belief among people of all ethnicities and kinds of religious heritage that many traditional practices and activities reflect an older, more ignorant, and more rigid era. Often behaviors and beliefs that were once regarded as signs of devotion and spirituality are now regarded as signs of mental illness.”

This point of view is endemic within the developed nations and represents a challenge to all of us, especially those of us who are fully engaged with broader American society but who think Judaism can and should play a positive role in our personal and collective lives. But we cannot attempt to meet this challenge if what we offer is rejected out of hand when we create barriers to Jewish engagement because we are out of touch with the real, lived lives of most American Jews.

About the Author
Mark grew up in Queens, NY during the "heyday" of American Judaism. He attended public schools and acquired a limited Jewish education. When he met his future wife, who was not Jewish, she insisted that religion be a part of their life together. She converted to Judaism and that launched him on his Jewish journey. He has been a synagogue president in Upstate New York for several years.
Related Topics
Related Posts
Comments