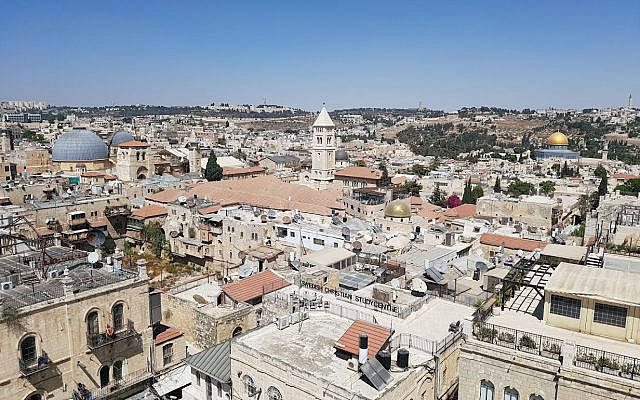 One of the many challenges posed by COVID has been the inability to travel, and for me, that meant not going to Israel for 20 months – the longest stretch without visiting in almost 20 years.  Fortunately, I’ve had the opportunity to spend a good part of my summer in Israel, working remotely and spending time with family.  As I sit here at a café across the street from the Machane Yehuda “shuk” in Jerusalem, I’m still amazed at the economic and human vibrancy, the flourishing civil society, and the incredible diversity I see all around.

With Rosh Hashanah, the Jewish New Year, now just days away, many Jews around the world are preparing for the High Holidays with increased gusto.  That is certainly true here in Israel.  The period of time leading into the New Year is a time for introspection and reflection.  I cannot help but reflect on the challenging past year we’ve all endured and how a strong U.S.-Israel relationship has helped both of our countries to address the serious challenges we face.

We can’t talk about this past year without talking about COVID-19. Israel has had one of the most successful vaccine rollout and distribution campaigns; by May, the vast majority of the country’s nine-million population had already been vaccinated, with over 90 percent of those 50 and older inoculated, and efforts continue to encourage reluctant communities to get vaccinated.  And as the Delta variant continues to spread, Israel is taking swift action by offering a COVID booster shot to all vaccinated people. I actually stood in line earlier this week with young and old, Arab and Jewish Israelis, and others from around the world to get my booster shot at a public vaccination site. Israel’s leadership in fighting COVID serves as a real-world laboratory on what works and what doesn’t – and joint-cooperation agreements between American and Israeli scientists are only helping to further accelerate efforts to defeat the pandemic.

At the same time, terrorist attacks by groups like Hamas this past year have also reinforced Israel’s right and duty to defend itself. I arrived in Israel earlier this summer on the heels of Hamas’ two-week 4,000+ rocket assault into Israeli territory – the longest and heaviest skirmish between Israel and Hamas since the 2014 war in Gaza. While the attacks have thankfully stopped, for now at least, Hamas continues to ramp up tensions and employ terror tactics that target Israeli civilians and communities. Just this past week, Hamas staged violent riots between Palestinian protestors and troops along the Gaza Strip border and launched incendiary balloons into southern Israel causing extensive damage.  An Israeli soldier was shot in the face while attempting to defend Israel’s border, and tragically he succumbed to his wounds this week.

With the recent Taliban takeover of Afghanistan, ISIS-K suicide bombings across the region, including the recent attack that took the lives of 13 brave U.S. Marines, and Iran’s hope to further establish influence in the area, terrorist groups like Hamas and Hezbollah feel increasingly emboldened to radicalize the Middle East. Amid these escalating tensions and growing security threats, it’s clearer than ever that a strong U.S.-Israel relationship is needed to counterbalance Iran and its terror proxies, and to promote stability and peace in the region.  The recent meetings in Washington between President Biden and Prime Minister Bennett affirmed that Iranian aggression and in particular its nuclear ambitions must be stopped.

A more positive development on the ground in Israel is the visible effects of the Abraham Accords signed this past year between Israel and Gulf States including UAE, Bahrain, Morocco, and Sudan.  Normalizing relationships and establishing economic ties between these countries is a victory not only for Israel but also the entire world, especially given how out-of-reach it seemed just a few years ago that these countries would even recognize Israel’s right to exist, let alone form real economic ties. More than 130,000 Israeli tourists have visited Dubai since the agreements were formalized and an equal number of Emiratis are expected to visit Israel (COVID-permitting) in 2021, spurring new economic opportunities and critical person-to-person cultural and diplomatic relationships between Arabs and Jews. In just one year, trade between Israel and the UAE has already topped $570M, and it could be in the billions in just a few years.  Just this week, Bahrain sent its first ambassador, Khaled Al Jalahma, to Israel.

This new era of Arab-Israeli interaction is having a positive local impact as well.  A new UAE-Israel Business Council reportedly has more than 4,000 members and a new Gulf-Israel Womens’ Forum is bringing women together from across the region.  Jerusalem Deputy Mayor Fleur Hassan-Nahoum, who helped launch the business council and womens’ forum, is also looking to bring R&D jobs from the UAE to create new business opportunities for Jerusalem’s Arab community.

During this moment of instability with the COVID delta variant spreading rapidly – more than 11,000 new cases daily in Israel, and Hamas continuing to manipulate tensions maliciously between Israelis and Palestinians, the Abraham Accords serve as a powerful demonstration of hope – the hope that is needed to continue forward on the path toward a future where peace, security, and mutual prosperity is possible. While current prospects of peace between Israel and the Palestinians may seem far off, the Abraham Accords could, according to some local leaders, serve as a positive model for future Israeli-Palestinian cooperation.

As we face the new year, let’s build upon this hope. For as much darkness we’ve experienced this past year, we’ve also learned that a strong U.S.-Israel relationship can lead to significant scientific and technological breakthroughs to combat global challenges like COVID-19; it can beat thousands of rockets that terrorists launch toward innocent Israeli and Palestinian civilians; it can provide a clear vision that peace is possible in the region without sacrificing Israel’s existence and safety.