The Blogs
Miroslav Ilias
Apply for a Blog
Please note that the posts on The Blogs are contributed by third parties. The opinions, facts and any media content in them are presented solely by the authors, and neither The Times of Israel nor its partners assume any responsibility for them. Please contact us in case of abuse. In case of abuse,
Report this post. 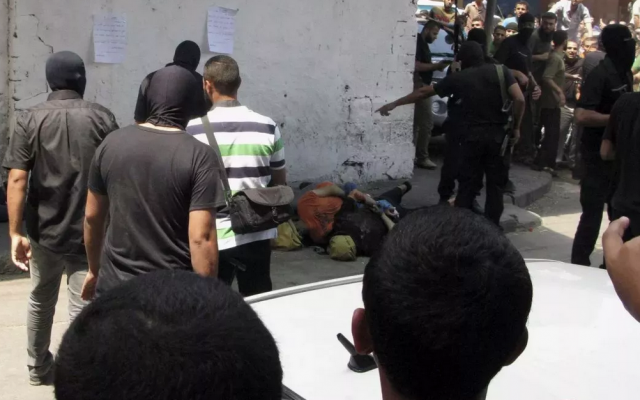 People watch as Hamas militants surround the bodies of Palestinians suspected of collaborating with Israel after they executed them in Gaza City August 22, 2014. Photo credit: Reuters
Seven years ago, in summer 2014, I was sitting in Al-Katiba jail in Gaza with more then twenty cellmates. Our big prison room was on the second floor of the building. As I was told by fellow prisoner Samer, at the third floor there were incarcerated Israeli informers, considered the “most serious law offenders,” according to Hamas.
In August 2014, many informers were executed in the Al-Katiba yard. In the same yard, I was passing by, when I was released from that prison. Amnesty International protested.
Oh, poor Gazans, clandestine informers of Israel! You got the sad part of the deal. You may covertly earn some cash, but you may also die by shooting or hanging if you are exposed. If you are lucky, you may escape to Israel, most often by rushing towards the no-go zone, to the border fence where Israeli soldiers will meet you.
Everybody understands that Israel needs valuable military intelligence. Where are weapon caches, where are tunnels located, where are certain high-ranking terrorists living, where are long-range rockets stored. This valuable info can be obtained from motivated individuals in Gaza. See this article for more enlightenment.
I dare to write here openly: could Israel provide interested informers also with weapons and military training so they can resist Hamas forces if they come to arrest them? Certainly, it is worth being equipped with M16 and a few grenades, euphemistically speaking, to slow down Hamas operatives when escaping to Israel. Last, not least – such armed informers could form anti-Hamas forces.
Likewise, Israel should allow more Christian Zionists to enter Gaza, based on humanitarian premises. They could bring some valuable info as well. Myself, I was denied entry to Gaza in 2014, and the rest of the story is known…
About the Author
By profession, Miroslav Ilias is an Associate Professor at Matej Bel University, Slovakia. By heart, he is Christian Zionist.
Related Topics
Related Posts
Comments