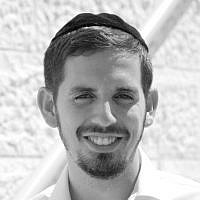 The Blogs
Menachem Schloss
Apply for a Blog
Advertisement
Please note that the posts on The Blogs are contributed by third parties. The opinions, facts and any media content in them are presented solely by the authors, and neither The Times of Israel nor its partners assume any responsibility for them. Please contact us in case of abuse. In case of abuse,
Report this post.

To all anti Israel ranters on Facebook …
I’ve finally gotten fed up of reading your hate and disgust filled posts directed at Israel.
I am sure you live very peace filled lives, privileged to live in comfort and quiet. And in that serene space, you sat down comfortably in your living room couch to watch and absorb the news. It didn’t take you but a few seconds to reach the conclusion that Israel is out to ‘slaughter’ as many Palestinians as possible.

Consider this for a moment…

Have you ever experienced what it’s like to ‘RUN, you have fifteen seconds to get into a shelter – there is a missile coming your way’?.

Imagine living like this on a daily basis for years, never knowing when you send your kids off to school if they are going to have to face a missile attack that day.

I have personally only been experiencing it over the past week but my cousins in the south have been bombarded with thousands of rockets for years now.

I for one, do not blame you for not mentioning it or sympathizing with us all this time, world media tends to not cover news material which doesn’t have attached dramatic images of women and children crying and Jews in general have had to learn to stop crying over 60 years ago, sometime during the 2nd world war. We have had to learn how to not show fear in the face of terror.
As much as it pains me for the anguish and suffering of many innocent people in Gaza, it’s awfully tragic that they live under a governance who insist on constantly making life a misery for it’s neighbors. Hamas has from the start made it clear that their intention is to get rid of every last Jew in Israel.If not for Hamas, peace could very well have been a likelihood by now.

Yesterday I heard the BBC’s Jeremy Bowen report from Beit Lahiya, where one Israeli strike hit a home for disabled people, tragically two people died, supposedly they had not managed to leave the area in time, after the received warnings from the IDF.

Why is attention not being paid to the mere horrendous fact that Hamas commonly stores their missiles and launches attacks from such positions, leaving disabled individuals vulnerable?.

How Would You Propose to Respond?

Of course, I would also love to know how you would respond if you had even just one missile/rocket launched into the area you live in…
After you’ve rushed off to a bomb shelter, after the sirens have stopped wailing, wait in there the full required 10 minutes, hold on and comfort your little ones, while you feel the tremble of the booms and the shaking of the windows and hope to G-d that the iron dome intercepts the rocket and it doesn’t explode on your house!
How would you like your government to respond now?

(Actually with your emotions running wild, I would imagine you would want firm and swift action to be taken)…

But say, you are a level headed type of guy, so instead your government sends its security forces to take out the missiles in the safest way possible, by sending warnings and repeated alerts to families telling them to leave the area prior to taking action – It’s the only option you have, right?.
But of course you don’t agree…it’s those images the media have been influencing and manipulating you with. I don’t blame you! Those images break my heart too.
Media manipulation is always the strongest type of manipulation!
I for one have long learned not to believe anything I see or hear via the media. You may also wish to reconsider your ‘clear’ thought out opinions.
Things are just very ‘slightly’ more complicated than how it’s portrayed to be!

About the Author
Menachem Schloss grew up in Stamford Hill, London, lives currently in Beit Shemesh, Israel. He has a private therapy practice and blogs on thought provoking ideas in psychotherapy.
Related Topics
Related Posts
Comments