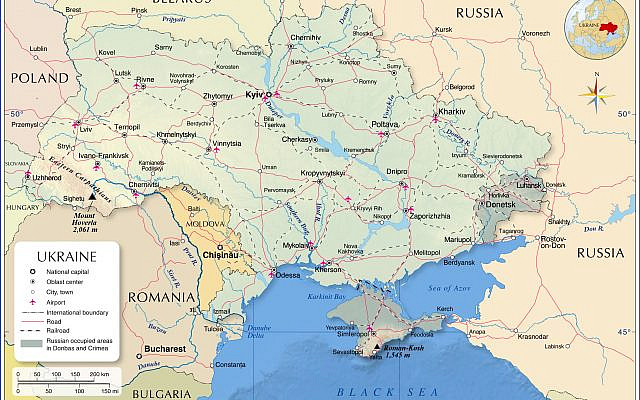 Russia's border with Ukraine, and the territory of Crimea. Source: One Nations Map

Next month I was due to be in Moscow to give a series of seminars on Geopolitical issues in the Middle East and Europe. The class of research students at Russian universities would include some employees of the Russian Foreign Ministry, eager to learn more about the major geopolitical, territorial and conflict issues – historical and contemporary – facing Europe and its neighbouring regions in the years to come.

Needless to say that visit is no longer on the agenda following the Russian invasion of Ukraine.

And, so it would appear, the Russian Foreign Ministry was already working on its own version of how to change the contemporary geopolitics of Eastern-Central Europe, with little regard to the contemporary norms of international law or territorial integrity of neighbouring sovereign States.

Ukraine’s borders have been contested for much of history by neighbouring powers. The current territorial configuration of the State has been relatively stable since it was recognised in the aftermath of the Russian revolution as a founding member State of the Soviet Union in 1922, a period in which many of the current borders in Central and Eastern Europe came into being. Most of these borders, with relatively minor changes, have remained  in situ until today, as part of the Soviet Union and in the post-Soviet period following the breakup of the Soviet Union in 1991.

One significant change which took place in Ukraine’s borders was the formal incorporation of Crimea, previously a separate Soviet Republic, by the Soviet government in the 1950’s. For as long as the Soviet Union continued to exist, this transfer was never questioned. But following the dissolution of the Soviet Union, there have been voices questioning Crimea’s status, not least by the Russian Authorities who have continually argued that Crimea should return to being part of Russia – a geopolitical ideology strongly backed and promoted by Vladimir Putin.

The ongoing tensions between Russia and Ukraine are not new, but they became stronger in recent years, culminating in  the Russian occupation of parts of Crimea. This was  followed by the change of government in Ukraine in 2019, from one which accepted its role as a Russian satellite to one which has promoted its own autonomy and independence and was considering alternative geopolitical alignments as a potential member of  NATO, and even a future application to be part of the EU.

Putin, who self perceives as a geopolitical counterweight to both NATO and the EU, used this as the final pawn in his long term desire to reincorporate Ukraine as part of a Greater Russia and, at the very least, to have its status similar to that of Belorussia.

Notwithstanding, there were few, if any, scholars or diplomats, who forecasted the current Russian military invasion – as indeed they failed to forecast most of the other major geopolitical events of the past few decades including the collapse of the Soviet Union, or the rise of Islamic radicalism, the two most significant events in global politics to have affected our generation. We may be good at tracing and analysing the changing histories of these, and other regions, but have largely failed to predict the major events which are changing our world at a rapid pace.

Certainly, no one predicted the sort of military invasion which, we like to convince ourselves, was a thing of the past – especially in a “peaceful” Europe. In a world of cyber wars, social media, laser missiles and iron domes, the introduction of heavy armoured troops and tanks, the destruction of cities and their civilian populations, the creation of new mass refugee flows – the likes of which have not been seen since the end of World War II, were simply not part of our geopolitical imaginations or visions. They were events for the historians, not for those who, behind their computer screens, seminar rooms and mass dissemination of information, were comfortably analysing the world from a position of comfort.

What has changed however, is the fact that in 2022, as contrasted with 1939, the western “civilised” world is not prepared to risk its own troops and soldiers in engaging in a physical war to counter the Russian invasion. President Putin clearly counted on this as he too is aware of the changing social milieux in which we live, one in which the rabid nationalisms of the past and the acceptance of war as a means to resolve all conflicts, is simply no longer part of the way of thinking of generations of people who have been born into, and grown up in, a post WWII world. This is not necessarily a bad thing, but equally it shows the weakness of a world of checks and balances in which some powers are still prepared to use such strategies of violence and conquest, knowing that there will not be any forceful response.

Whether the western world would really change its strategy if, for instance, a member of NATO was attacked, is questionable. But it is unlikely that Putin would be prepared to put that to the test just as it is unlikely, despite his veiled hints, that he would introduce nuclear weapons into the arena. But we have been wrong in the past, and one prefers not to think about this potential strategy – keep it locked away in the filing cabinets and on the computer hard disks.

Whether or not the mass boycott of Russia, its financial cultural and sporting institutions will have any long term impact also remains to be seen. The weakening of the Russian economy, and the virtual isolating of its entire population would, we assume, result in mass internal unrest and demonstrations with a view to government change. But Russia, and Putin, have displayed that they are as adept as closing down internal unrest as were the Soviet regimes of the not too distant past. It would take a revolution of the type which brought down the Czarist regime a century ago, for such a scenario to materialise and this does not seem to be on the cards at this moment.

Border scholars, an area of research which has undergone a major renaissance during the past thirty years against the backdrop of the globalisation arguments of the 1980s and 1990s that we are moving into an era of a borderless word, thanks to the era of peace within which we live and as evidenced by the expansion of the EU one the one hand, and the collapse of the Soviet Union and Iron Curtain on the other, often focus on the artificiality of the territorial lines and borders which were formulated at different times in the previous two centuries.

Yet these lines become sacrosanct in a relatively short period of time, even if they have little long term historic rationale, and even where they have split up ethnic populations into separate States, and where empires (such as the Soviet Union) have forcibly moved millions of peoples in an attempt to dilute ethnic territories through policies of colonisation. In the Baltic States, many ethnic Russians and their descendants were faced with the dilemma of remaining in a non-Russian satellite State which became part of the EU, or return to their Russian homeland. It only takes two to three short generations of colonisers to feel an integral part of the State in which they were born and grew up, but to remain  despised by the home populations – such was the case of the French in North Africa or the West Bank settlers of today. 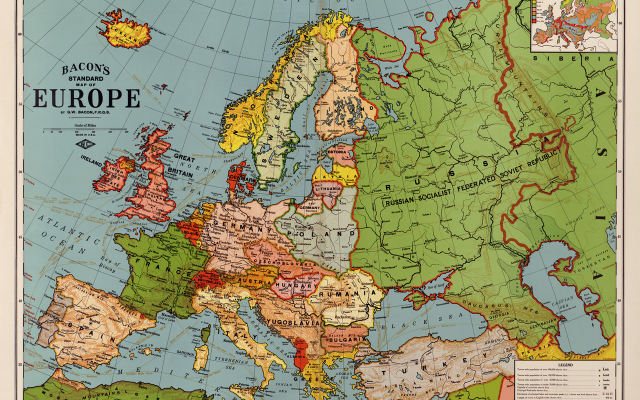 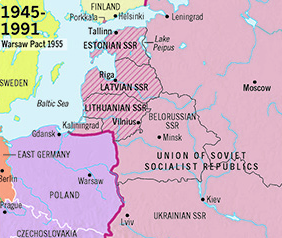 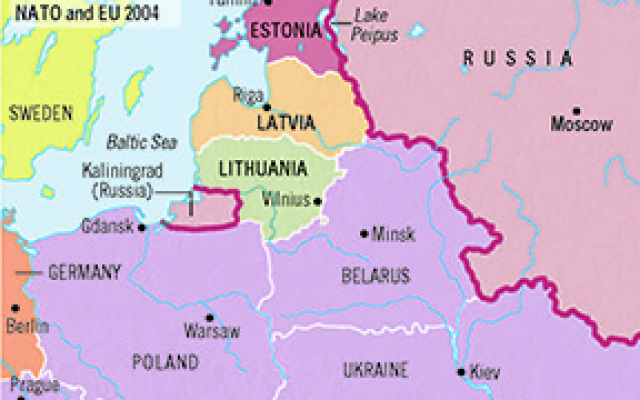 Of all the global powers, none have proved their inability to act more than the EU. The EU is the territorial neighbour of Russia, the one who should feel most threatened by the Russian invasion. Beyond the ability to freeze bank accounts and to open or close their borders to allow Ukrainian refugees in, the EU has proved to be inept. And to watch the surrealistic scene of the British Parliament clapping and cheering the presence of the Ukrainian ambassador attending the debate on the current situation (against the accepted protocol of this austere House) , reminded us how Britain, once the imperial powerhouse of the world, has absolutely no influence in word affairs, not in the Middle East and certainly not what is happening in the rest of Europe. This has become even more evident following their  act of geopolitical stupidity by removing themselves from any form of  European or global influence as a result of BREXIT – an act which must have been more than acceptable to Putin who would like nothing more than the gradual breakup of the EU.

The most that Britain could do was to pick on a single Russian oligarch – one of many – Roman Abramowitch who, because of his ownership of Chelsea football club (which he now intends to sell) has a higher profile than other oligarchs, who have partially relocated to Britain during the past two decades – and many of whom are much closer to Putin and his regime. It is unlikely that any of these other oligarchs have given even a fraction of the money given by Abramowitch to charities, to stamping out racism and to promoting Holocaust remembrance. But for as long as Abramowitch, along with other oligarchs, were happy to invest their billions into the British economy, everything was OK, until Putin came along and spoiled the party. I am no personal fan of Abramowitch (or any of the oligarchs who made their fortunes out of the break up of the Soviet Union) – after all he put his money into the wrong football club – but there are questions to be asked about the reason he has been singled out and named in such a way. 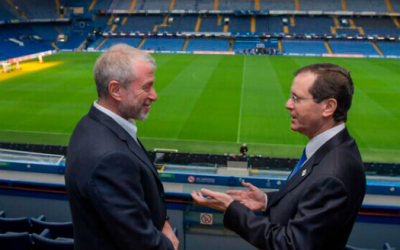 In our world of Geopolitics, Putin has succeeded in reshuffling the cards. Many of our theories about global harmony, European stability, borderless worlds, and a world in which the wars of old have been replaced by the globalization and technology of the present, have gone out of the window (perhaps not for the first time). I am not suggesting that we should respond by sending our troops and going to war as would have been the case seventy years ago, but it is time that we woke up to harsh realities of the world in which we live and start to rethink many of the principles with which we have been viewing the world in the post WWII era – so that we don’t reach a WWIII at some time in the future.