After being confronted with anti-Semitism for the first time as a youth, and realizing this was from being an isolated incident, Swedish journalist Annika Hernroth-Rothstein began wondering how Jews manage to survive, and in many cases thrive, in the diaspora. She set forth on a personal mission “to show … and highlight the history, culture, and lives of [her] brothers and sisters all across the world.”

The result of the author’s “journey into the radically unknown and comfortably familiar” is her richly detailed investigative memoir, Exile: Portraits of the Jewish Diaspora (Bombardier Books, January, 2020). For the author, and for readers who join her on her travels, the book is a profound, enlightening experience.

Hernroth-Rothstein’s first stop is the island of Djerba, off the coast of Tunisia. Isolated in its self-imposed ghetto, the Jewish community there is actually growing because the Tunisian Jews “understand the rules and limitations to which they must adhere.” They have survived because they “have created an impenetrable core the provides great comfort and relative safety.” The author wonders if this “might be the future of the Jewish diaspora: to refuse modernity, hide from the outside world, and plant your feet firmly in the past.” 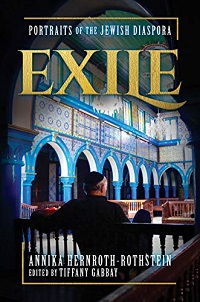 Next the author meets the Jews of Morocco who have long been considered dhimmis, or ‘humbled’ second-class citizens. The author finds that Moroccan Jewry enjoys “a sense of freedom with strings attached and a permanent state of exception that is uncomfortable and odd.”

In Tehran the author learns that Iranian Jews “are free to perform their religious rites and ceremonies, and to act according to their own canon in matters of personal affairs and religious education.” That freedom is limited by the need to adhere to Sharia law and to refrain from showing support for the Jewish State.

To the author’s surprise, she sees that Iranian Jews’ “synagogues are unguarded, their Jewish identity on proud display, and their religious life lauded and encouraged.” This freedom, the author realizes, is to a certain degree more than she enjoys as a European Jew. Still, the Iranians’ “freedom exists inside a large and impenetrable prison, their homogeneous traditional orthodoxy is only possible where the alternatives are deemed illegal.”

The author meets vibrant Jewish communities in the most unexpected places. The Jews of Irkutsk in Siberia have retained their traditions, and “Jewish life keeps on going and even growing,” despite their being mixed into the local society. Finland’s Jewish community is “a deeply traditional one … and surprisingly vivacious,” while in Venezuela, it is “deeply traditional but not necessarily religious … The Jews here—regardless of observance level and social status—are family, and they look out for each other.”

In all the communities she visits, there is a question of what will happen in the future. The Jews of Palermo will need to leave Sicily if they wish to live their lives as observant Jews. In Turkey the author finds a community “that has started to exchange Jewish life for Jewish memory.” The author realizes that even in her native Sweden, “it is hard to be a Jew.”

“The ability to adapt has kept the Jews alive all over the world for centuries,” the author tells us, “but that ability can also prove fatal when the adaption drives them too far from their roots.”

At time the narrative lags under the weight of only partially-related historical details (the rise of Castro to power in Cuba, for example). But the book truly fascinates with its depictions of the variety of Jewish tastes and traditions. The author joins the Jews of Djerba for a Shabbat lunch of “liver-stuffed chicken fillets, spicy kebbabs, and perfect Persian-style rice.” In Uzbekistan she joins the community for the “boiled eggs, fried carp, and vodka” of a Bukharian kiddush. In Tehran she sits down with a family for a meal of Ghormeh sabzi beef and bean stew.

Jewish travelers on occasion enhance their experiences in foreign lands by seeking out historical and cultural sites—synagogues, schools, and cemeteries. Only rarely is there an opportunity to actually meet with members of local communities and to hear their story. Sharing conversations with her coreligionists, the author succeeds in giving readers a personal connection to their lives, the difficulties of their past, and the uncertainties of their future.

Hernroth-Rothstein may not have solved the mystery of Jewish survival, but her portrayal of Jewish expression around the world gives us deep insight into the story of our diaspora—customs, history, and traditions which are unknown but at the same time unexpectedly very familiar.

Annika Hernroth-Rothstein is a Swedish investigative journalist, political pundit, and writer on the Middle East, religious affairs and global anti-Semitism. Her writing has been published in the The Wall Street Journal, National Review, Mosaic Magazine, and The Jerusalem Post and she has a syndicated column in Israel Hayom.