Who knows what really transpired at Masada, the desert fortress that today serves as a symbol of Jewish heroism and Israeli national pride? Did its residents listen to an impassioned speech by their Sicarii rebel leader, Eleazer Ben Yair, and chose to commit suicide rather than fall into Roman slavery? Or are there other explanations for their story?

These questions and possible answers are raised in Masada: Thou Shalt Not Kill by Shimon Avish (MarbleStone Press, January 2022), first in a planned fiction series themed around significant events in ancient Jewish history.

What little we know of the Roman assault on Masada and its aftermath comes from the writings of Jewish military commander turned historian Flavius Josephus, who was not present at Masada in the year 73. It is said that Josephus learned of the siege from the eyewitness account of two women and five children who survived the mass suicide. It is likely that Josephus, later a Roman citizen, embellished his story so that it would find favor in the eyes of his hosts.

The lack of convincing archaeological evidence to support the idea of mass suicide gives a novelist ample opportunity to create their own version of historical events. In this novel, while mostly following the accepted timeline of events, the author provides an alternative explanation to what happened on Masada during the Roman siege. 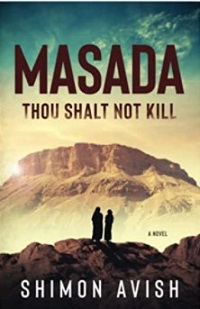 The narrative follows the story of 18-year-old Daniel, son of a Temple priest, who is abducted by Sicarii assassins and taken to the Masada fortress which they captured during the Jewish-Roman war that led to the destruction of the Second Temple. On Masada, Daniel is assigned menial tasks of clearing rocks and tending to crops, while at the same time falling in love with Judith, sister of one of the rebels stationed at the fortress.

Daniel grows into a leadership role, eventually challenging the authoritarian rule of Eleazer Ben Yair. After the Masada rebels attack and massacre the residents of nearby Ein Gedi, and because of a lack of enough food to support their community, Daniel decides to lead a large group of residents away from Masada and into exile.

As the Romans begin their siege, and Eleazer Ben Yair calls for mass suicide, Daniel must find the way to utilize his strength, character, and resolve to stay alive.

While the novel’s dialogue tends to sound as if it was spoken by modern day characters, the book will appeal to readers of historical novels, especially to those fascinated by the legend of the nearly unassailable Masada fortress.

Shimon Avish, a former soldier in the Israeli Defense Forces and a founder of a kibbutz in southern Israel, writes about significant events in ancient Jewish history. His work draws on his adventures in soldiering, farming, product design, cabinet making, political science, international business consulting, and living in the U.S., Canada, and Israel. He completed his doctoral degree in political science at Columbia University and was a Fulbright-Hays Fellow. Masada: Thou Shalt Not Kill is his first novel.