In the opening pages of The Tattooist of Auschwitz by Heather Morris (Zaffre, January 2018), Lale Sokolov is standing in a crowded cattle train on his way to an unknown destination. While his fellow travelers are traumatized by the journey, Lale has adopted a “wait and see” attitude, which doesn’t change even when he marches under a gate with the words ‘Arbeit Macht Frei’ wrought from the metal.

“Just do as you’re told, you’ll be fine,” Lale says to a newfound friend. As fate would have it, Lale’s experiences at the camp are not as horrendous as those of his fellow Jews.

In April 1942, the rate of transports arriving in Auschwitz is accelerating. At the gates of the camp, Jews and gypsies from all over Europe are listed in the Nazi records and their arms are tattooed in green ink. Lale has been appointed to be one of the camp’s tattooists. Even as he defiles the arms of terrified men and women, Lale shows compassion for his fellow prisoners. Perhaps the relative freedom he enjoys as a tattooist will allow him to use his position to help them. 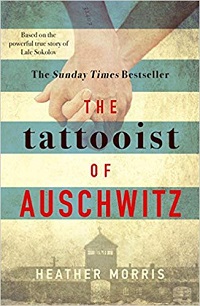 This widely acclaimed novel is based on the true story of Lale Sokolov, how he not only survived his years at Auschwitz-Birkenau, but also found love in the camp. When he inks the serial number into the arm of a young woman, she steals his heart at first glance. This is Gita, his future wife, and their hidden romance in the most difficult of conditions proves that love conquers all. Not for the vast majority of prisoners, of course, but in this specific case.

Misrepresenting history for the sake of fiction

In recent weeks, several reviewers and researchers have charged that while The Tattooist of Auschwitz is based on a true story, the truth was bent in its portrayal of what actually happened in the Holocaust. Mentioned as an example is the novel’s mention of the use of penicillin in the camp when the drug was not yet readily available during the war. Another challenge to the book’s authenticity is that the number Lale tattooed on Gita’s arm, 34902, could not possibly be accurate.

“It should be ruled out that a prisoner who arrived at the camp on 13 April 1942 could receive such a high number,” states Wanda Witek-Malicka of the Auschwitz Memorial Research Centre. “It is however a fact that on 13 April 1942 a female transport from Slovakia arrived at Auschwitz – but they were given numbers from 4761 to 5203. Therefore, Gita Furman was either brought to the camp on a different date or received a different number than that indicated in the book.”

Writing in The New York Times, Christine Kennedy says that this “seemingly pointless error [about the Auschwitz number system] … undermines the credibility of other stories [in the novel].”

How much leeway do authors have when they create fiction based on true stories? How far can you misdescribe the facts, or misstate the details, and still present an accurate depiction of historical events?

It’s important to tell the story

Very soon, there will be no remaining Holocaust survivors. There will be no further firsthand accounts of what it was like to be imprisoned in the camps. More troubling, to me, is the danger that future generations may not find it important to learn what this tragic period in our history was all about. It is important, therefore, to tell the story, even if it is embellished somewhat in fiction.

I personally don’t think that mentioning an inaccurate serial number detracts from the important message this book is giving to its readers. While the truth may have been bent for dramatic purposes, the novel is reaching a large audience that would never have otherwise been exposed to the horrors of the Holocaust.

What bothers me more about The Tattooist of Auschwitz is that while it is a quick, compelling read, the book is not well written. The dialogue sounds false, almost as if someone from the modern era has been transported back in time to speak to the camp’s inmates. The narrative that glosses over the harsh conditions of the camp to focus on a love affair seems over romanticized. Most readers will probably overlook the simple prose and the characters’ lack of depth to see the bigger picture.

Every survivor of the Holocaust has a story to tell. This story, of how Lale and Gita survived the camps, is one that will remain in the reader’s memory for a long time.

Heather Morris, a native of New Zealand, now lives in Australia. In 2003, she was introduced to an elderly gentleman, Lale Sokolov, who ‘might just have a story worth telling’. Morris originally wrote Lale’s story as a screenplay – which ranked high in international competitions – before reshaping it into her debut novel, The Tattooist of Auschwitz.