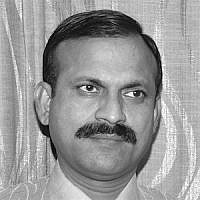 The Blogs
Anoop Kumar Gupta
Apply for a Blog
Advertisement
Please note that the posts on The Blogs are contributed by third parties. The opinions, facts and any media content in them are presented solely by the authors, and neither The Times of Israel nor its partners assume any responsibility for them. Please contact us in case of abuse. In case of abuse,
Report this post.

Reflecting a kind of politico-strategic pluralism, there exist at least three paradigms in India which portrays Israel in different avatars (incarnations). First paradigm is of Gandhi-Nehruvianism which is pro-Arab and pro-Palestinian. The second is that of Marxism whose doctrinal stand is anti-imperialist and anti-Zionist. The third one is related to political realism and Hindu nationalism which has pro-Israel leanings. Supporters of each of these paradigms could be found in various circles ranging from politico-academic space to diplomatic circles and strategic community.

Gandhi-Nehruvian paradigm did express sympathy with the Jews but did not support Zionism and Zionist efforts for the establishment of Israel. Mahatma Gandhi was against Jewish persecution and anti-semitism and in this regard he was sympathetic towards Jews. He was also critical of the Christian treatment of the Jews. Gandhi wrote in 1938 that ‘the cry for a national home for the Jews does not make much appeal to me’. He stated that the sanction for it is sought in the Bible, but the Palestine of Biblical conception is not a geographical tract. Mahatma Gandhi declared that ‘Palestine belongs to the Arabs in the same sense that England belongs to the English or France to the French’. He stated that it is wrong and inhuman to impose the Jews on the Arabs. He further advised the Jews ‘to cultivate a spiritual rather than a geographical Zion’. Exploring the roots of anti-Zionist rhetoric of Gandhi, Encyclopaedia Judaica stated that Gandhi perceived Judaism ‘through Christian tinted glasses’ and ‘Gandhi’s distorted view of Judaism…prejudiced his perception of Zionism’. It further argued that Gandhi’s passionate effort for ‘Hindu-Muslim amity in an undivided India influenced him to support the Muslim-Arab case against that of Zionism’. India’s first Prime Minister Jawaharlal Nehru also opposed Jewish statehood. Though Nehru was aware of the Jewish roots in Palestine, he did not support Balfour Declaration of 1917 on the ground that the country was not empty and uninhabited and it was already somebody else’s home. He also declared that we must remember that Palestine is essentially an Arab country, and must remain so. Nehruvian opposition to Zionism and Zionist effort for establishing Jewish Homeland in mandated Palestine could be searched in his opposition to imperialism, affinity to Arab nationalism and in his desire not to offend Arab states.

Reflecting the Gandhi-Nehruvian paradigm and opposing the PM Modi’s policy towards Israel, Congress leader Mani Shankar Aiyar expressed the view that Jewish state will not exist by mid-century, and that “Palestine will return to the Palestinians.” Aiyar argued that relations with Israel are morally unfeasible, and that the Jewish state was born in sin and will be dissolved by mid-century. The veteran Congress leader stressed that New Delhi’s principled stand has now been distorted by being viewing through the prism of defence cooperation. He further stated that PM Modi and Sushma Swaraj cowering behind the BRICS position is not an edifying sight and they took convenient cover behind that. In doing so, they forget Nehru. Aiyar suggested that Secular India should not be joining Modi in extending felicitations to the Israeli Prime Minister Benjamin Netanyahu, but in expressing our solidarity with Arabs.

Indian left represents the second paradigm that is very critical of and opposed to Zionism and Israel. This prism is very close to Gandhi-Nehruvian prism as far as Zionism and Israel is concerned. The ideology of Marxism was opposed to the idea of Zionism. The roots of anti-Zionist thoughts in Marxist tradition could be found in the writings of Karl Marx himself, and especially in his “Materialistic analysis of the Jewish Problem”. This paradigm explained Zionism and Israel through the ideological lens of Marxism and Leninism.  It opposed the ‘forcible establishment’ of State of Israel in 1948 and strongly supported the cause of Palestinian people. According to this perspective, Israel has waged a war against Palestinian people and occupied the entire territory of Palestine. Responding to Prime Minister Narendra Modi’s proposed visit to Israel, Communist Party of India-Marxist (CPI-M) stated that it amounts to abandoning India’s long-standing support and ‘steadfast commitment’ for an independent Palestinian state. The CPI-M also denounced India’s decision to abstain against Israel in a UN Human Rights Council vote as a sign of its “pro-US and pro-Israeli shift”.

Representing the Indian left paradigm, CPI-M leader Sitaram Yechury urged Modi regime that India should not fund Israel`s war on Palestinians by buying weapons from them. He categorically stated that unfortunately, India has been financing Israel`s inhuman war on Palestine by being the largest purchaser of Israeli weapons in the world. That is why he urged the government, “if not stop, then at least, it can suspend the purchase of weapons to express our solidarity with Palestine”. This line of thinking supports the creation of an independent State of Palestine and seeks complete withdrawal of IDF and dismantlement of all Israeli settlement from the occupied territories of West Bank, Gaza Strip and East Jerusalem.

Supporting the Zionist case, Savarkar argued that the ‘fatherland and the holy-land of the Arbian Moslems lies in Arabia and not in Palestine’ and that is why ‘the whole of Palestine ought to have been resorted to the Jews’. Savarkar was not convinced with the Nehruvian proposition that the partition of Palestine would be against unity and integrity of Palestine and opposition to the creation of Jewish state will secure the goodwill of Muslim states. In his famous book Hindutva (1923), he emphasized his support for the Zionist cause.

“If the Zionists’ dreams were realized, if Palestine became a Jewish state, it would gladden us almost as much as our Jewish friends”, Savarkar said. The Hindu nationalist leader proposed that India’s international policy should be based on ‘to break up the power of the Moslem Blocks from Africa to the Malayan Peninsula’. He was convinced that emergence of ‘a strong and independent Jewish state’ would ‘serve to checkmate the aggressive tendencies of Moslem fanaticism in general’. Based on his perception of Zionism and Israel, Savarkar suggested that ‘establishment of independent Jewish state in Palestine’ should be supported ‘on moral as well as political grounds.’

Savarkar emphasised the commonality between Hindu and Jewish people and in this regard he categorically stated “the Jewish people bear no political ill-will towards Hindudom. The Jewish minority in Hindusthan too had given us no cause to suspect them as we have been compelled to suspect the Moslem minority”.

Pro-Israeli political parties and groups raised voices in favour of establishing diplomatic relations with Israel. Swatantra Party, Jan Sangh and later, the BJP, supported the case of Israel. The Jan Sangh advocated the establishment of diplomatic relations with Israel. BJP leader Pramod Mahajan pointed out that even though both China and Pakistan had occupied large parts of Indian territory, yet there were full diplomatic links with them. Then Samajwadi Janata Party leader Yashwant Sinha maintained that India’s foreign policy should be based on national interest.

Realist paradigm perceives Israel as strategic and technological assets on various pragmatic considerations based on national interests, national security and national development. Reflecting the paradigm of political realism, India’s foreign secretary JN Dixit advocated normalisation of India-Israel relations in order to fulfil the ‘legitimate interests of India’. It was realised that India could learn a lot from Israeli experience in the fields of agriculture, drip irrigation, water conservation, solar energy, border management and other areas of high end technology. Non-reciprocity of Arab-Muslim world to India’s national security concern compelled realists to be vocal regarding India’s Israel policy. Dixit lamented that “what have the Arabs given us, if I may ask? Did they vote for us in the Kashmir issue? Were they supportive of us when we had the East Pakistan crisis?” India’s National Security adviser Brajesh Mishra during NDA I regime supported the idea of a strategic axis between the US, Israel and India in a speech delivered at the American Jewish Committee in 2003. He said that the three countries “have to jointly face the same ugly face of modern-day terrorism.” “Such an alliance”, he said, “would have the political will and moral authority to take bold decisions in extreme cases of terrorist provocation.”

Regarding conflict in Gaza strip between Hamas and Israel, Subramanian Swamy stated that Indian Muslims should support Israel rather than Hamas. According to him this conflict should be seen as a fight between terrorism and a democratic country instead of from a religious viewpoint. Swamy further elaborated that Israel is a democratic country while Hamas is a terrorist organization and it will be in the nation’s interest to support Israel. In this regard he raised a question that why should patriotic Muslims of India support Hamas and not Israel when it is not in the nation’s interest.
Swamy also emphasised that India should support Israel at United Nations. He stressed on forming a mutual assistance pact with the country for helping each other in dealing with terrorism.

Gandhi-Nehruvian prism and Indian Marxist prism adopted pro-Arab and pro-Palestinian stance and criticised Zionism and Israel. Both the prisms reflected a zero-sum approach towards Arab-Israeli conflict and were based on either-or format.

On the other hand, supporters of political realism and Hindu nationalism expressed favourable attitude towards Israel and advocated friendly relations with Israel. Apart from structural compulsions at the system, sub-system and national level, these ideational underpinnings played a decisive role in shaping India’s foreign policy towards Israel. India’s policy towards Arab-Israel zone was initially guided by Nehruvian paradigm and resulted in pro-Arab and pro-Palestinian stand.

To conclude, it can be said that political realism has prevailed and the old policy framework based on Nehruvian paradigm has been modified recognising Israel as a beneficial strategic partner. As a matter of policy framework, one-sided alignment in West Asian strategic configuration has been replaced by multi-engagement in the region. This embarks a new journey in the story of India-Israel relations and paves way for a dialogue that pertains to the here and now, moving away from the rhetoric of the yesteryears.

About the Author
Anoop Kumar Gupta completed his doctoral studies on Soviet Policy towards Arab-Israel Conflict at JNU, New Delhi, India. He has also been a visiting researcher at Hebrew University of Jerusalem, Israel during 2002-03. He authored a brief monograph on "Changing Nature of India's Israel Policy" which is available at http://icwa.in/pdfs/shp/2014/SapruHousePaperFinal24082015.pdf.
Related Topics
Related Posts
Anoop Kumar Gupta
Comments