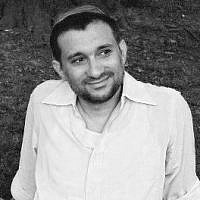 The Blogs
Dan Septimus
Apply for a Blog
Advertisement
Please note that the posts on The Blogs are contributed by third parties. The opinions, facts and any media content in them are presented solely by the authors, and neither The Times of Israel nor its partners assume any responsibility for them. Please contact us in case of abuse. In case of abuse,
Report this post.

What if there is no solution to restore order in the Middle East: a solution to “the situation” that the nation of Israel is constantly mired in?

What if the rogue group that Hamas certainly represents ultimately either by default or willing silence continues to cripple the Palestinian people. . . ?

During the past winter of negotiations between Israel, Palestine and the United States, Michael Oren’s suggested as a projection that if the foreseeable peace talks fail, Israel should “unilaterally withdraw” from the occupied territories. In light of the explosions in recent weeks, this advice was apparently insufficient: much like the Iranian youth, who has denounced–even at the cost of martyrdom– its own tyrannical regime controlled by another rogue group, the Shia Clerics. Power creates might which then controls, though simultaneously crippling a future, the masses. And if chaos continues to spread from the Middle East throughout every corner of the Arab world, as it surely has, then do we have a potentially pregnant World War III on our hands? Is that what the leaders of the free world, champions of democracy confront. .  . ?

About the Author
Dan Septimus holds a BA in comparative literature and a masters degree in social work (MSW) from Yeshiva University. He is a passionate writer, who made aliyah in 2011.
Related Topics
Related Posts
Comments