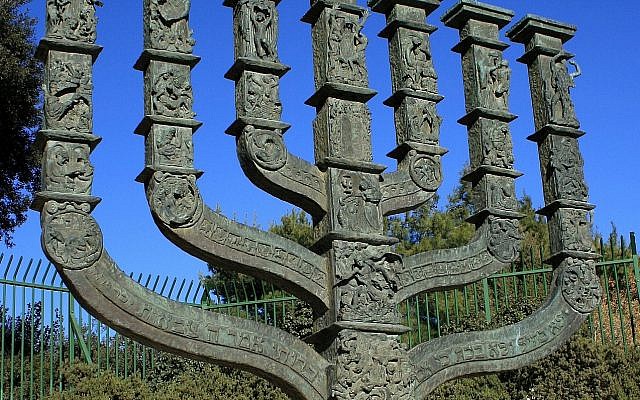 The Knesset Menorah, symbol of Israel, in Jerusalem. Photo by Jason Harris.

Israel’s democracy is at a boiling point. The announcement of a third set of general elections in less than a year is symptomatic of the deepest political crisis Israel has experienced since independence. The ongoing gridlock, governmental paralysis and growing instability are usually attributed to vehement disagreements over the policies, comportment and leadership style of the longest serving prime minister in the country’s history, Benjamin Netanyahu. The next round of elections will seal his political — and perhaps his legal — fate.

This is not, however, the central issue facing the country on March 2, 2020 ballot. The forthcoming elections are all about what’s left of Israel’s democracy after 10 years of systematic erosion, manipulation and distortion. Are these elections slated to be the death knell of Israel’s (admittedly flawed) democratic form of government? Or are they the much anticipated sign of a democratic turnaround in the country? Either of these possibilities exists — as does the murkier and less definitive option of muddling along. Whether knowingly or not, the tired, frustrated and, in many instances, disaffected electorate will supply the answer in three months’ time. They should know more about what they will be determining.

The starting point for the alternative interpretations of this critical conjuncture in Israel’s democratic fortunes is remarkably similar. The Netanyahu decade has, under a carefully nurtured formally democratic guise, overseen the chipping away of Israel’s liberal trappings, leaving its citizens with a competitive electoral system without much of its pluralistic and moderating contents. Civil liberties (such as freedom of expression, association and protest) have been selectively undermined, as have the rights of key minorities — especially Israel’s Arab citizens. The scaffold of institutional checks and balances designed to prevent executive abuses of power has been shaken to its foundations, enabling the autocratic concentration of power in the hands of a select few who have wielded their authority unchecked during the last period of governmental ambiguity. Representative institutions have been enfeebled, while the media, the judiciary and civil society — the watchdogs of democratic life — have been relentlessly assaulted. Tellingly, the foundational norms enshrined in Israel’s Declaration of Independence have been upended by the purposeful promotion of a populism built on an ultra-nationalist and ethnocentric definition of Israel’s identity which excludes both non-Jews and critics of the current government.

The result is an accelerated pattern of democratic recession marked by a yawning societal polarization and the unraveling of overarching norms of mutual toleration. Israel on the eve of the third decade of the present century is in the midst of a downward majoritarian maelstrom, which leaves very little room for constructive inclusion. Its process of democratic recession has yielded both growing social enmity and debilitating political deadlock.

For many Israeli citizens — as well as observers and analysts — another iteration of elections after two failed attempts at forming a coalition is but an additional step in the steady collapse of Israel’s already fast-deteriorating democracy. From this perspective, most Israelis are entering the third round of elections in a state of extreme electoral fatigue. Their faith in the ballot box has been severely challenged. They have lost confidence in political institutions and in their capacity to make a difference. Their trust in elected officials has waned as they have seen critical policy issues — not least a working budget that can deal with vital domestic matters or a genuine initiative to reach an accord with its neighbors — neglected, while politicians have been preoccupied with their personal fortunes. Some even go so far as to suggest that the legitimacy of the system is being questioned. Recent data from the Israel Democracy Index underlines the disturbing finding that the majority of Israelis feel that their democratic form of government is in grave danger.

Under these circumstances, it is argued, the March 2020 plebiscite is the preamble to Israel’s complete democratic decline. This chilling forecast, however, depends largely on the outcome of the vote. If the results merely replicate the standoff apparent in the April and September 2019 polls, then it is reasonable to assume that the downward slide of Israel toward a full autocracy wrapped in a democratic guise will continue apace. But if the results reverse the stalemate pattern characterizing the previous two rounds of elections this past year, they may point to another, quite different, process already in motion.

Indeed, in this second, diametrically opposite, view of the present political moment, the current political crisis is actually a sign of democratic revival. From this vantage point, the events of 2019 signify the beginning of a veritable democratic pushback. In April, the right-religious bloc headed by Mr. Netanyahu garnered 60 seats but failed to form a coalition due to Avigdor Liberman’s reluctance to join another Likud-led coalition with the ultra-Orthodox. In September, the prime minister’s bloc only mustered 55 seats. At the same time, the Blue-White agglomeration — hastily pasted together a year ago — outpolled the Likud and its allies; the bloc it led reached an impressive 57 seats. Liberman, the kingmaker, once again stayed out of the coalition talks and his position moving forward remains enigmatic. Nevertheless, a new trend is beginning to emerge, one which — proponents of this approach insist — points to a decided shift in the downward spiral which has become the hallmark of the past decade. Instability in the form of a return to the ballot box should therefore be seen not as a mark of further democratic weakness, but as a necessary crisis caused by a widespread democratic pushback which paves the way to the rejuvenation of Israel’s deep-set liberalism.

This interpretation is supported not only by the fact that Benny Gantz and the Blue-White party, despite considerable internal differences, has stood solidly together not only in the demand for Netanyahu’s ouster, but also in the common call for a liberal, open democracy in the face of growing autocratization. It is also bolstered by the upswing in political participation, especially in the Arab community and in the large urban areas largely supportive of center-left positions. Despite the initial hiccups in coalition negotiations and the far from inclusive attitudes towards the incorporation of Arab citizens into ministerial positions, the Blue-White leadership’s decision to hold firm on the possibilities and terms of rotation contributed directly to the call for new elections and to the possibility of an even better showing in the next round.

This version of the state of Israeli politics today, like its contrasting alternative, relies heavily on the results of the forthcoming ballot. Should all the parties to the center and left of the Likud succeed in acquiring enough votes to knit together a different coalition (early polls indicate that this is not beyond the realm of possibility), then a governmental rotation via the ballot box will provide the much-needed validation necessary to demonstrate a democratic rehabilitation in the making.

Even if the third round of elections brings about the political demise of Benjamin Netanyahu, this alone will not be able to uproot the seeds of “Bibism” that have been sown during his tenure. The composition of any new government will have a major influence on future trajectories. A national unity construct, much-touted on all sides of the political spectrum, may have the advantage of bridging some cleavages, but runs the grave risk of avoiding contentious political issues related to Israel’s physical shape and substantive character. A narrower coalition may be able to carve out new partners and directions, but will have to contend with stiff resistance from those heretofore in power. The ultimate success of a potential turnaround lies, therefore, mostly in the ability of a new government to set a civic-based vision for the country, lay down a detailed liberal agenda and determinedly pursue the task of building a shared society crucial for its democratic reinvigoration. The weary yet resilient Israeli voters will decide which of these scenarios will be realized this coming March.