Looking at Russia’s invasion of Ukraine, it’s hard not to be haunted by the fact that both World War I and World War II began in Europe. Are we witnessing the start of World War III?  That’s probably one of the reasons why so many of us are transfixed, following the developments with a sense of tremendous anxiety. And now Putin has upped the ante, declaring that he is placing his nuclear arsenal on the alert, recalling the tense days of the 1961 Cuban Missile Crisis when it felt as if the world was on the edge of a potential Armageddon. 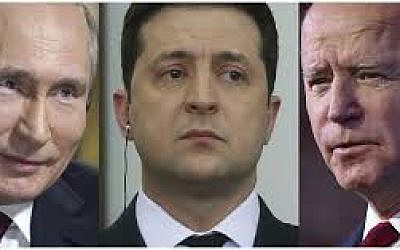 While I feel compelled to try to express a clear opinion about the emerging crisis, I also realize that events may quickly overtake any analysis that might be attempted today. After-all, until the Russian troops moved across the Ukrainian border, there were many expert analysts who still believed that it wouldn’t happen.

Yet I still feel it’s important to try to articulate a clear left-wing Israeli view of the situation.

Ukraine as an independent entity

First of all, Putin claims that Ukraine doesn’t have the right to consider itself an independent country. And although Ukraine as we know it today did not always exist as an independent entity, as the Hebrew University’s Ukrainian born lecturer Prof. Dmitry Shumsky explains it was the Soviet system which defined Ukraine as we know it today as an independent republic within the framework of the Union of Soviet Socialist Republics. In the Middle East we know that many countries like Lebanon, Syria, Jordan and the Gulf States evolved as the result of various imperialistic activities. But they have developed their own unique national character and identity, and are entitled to consider themselves a nation-state today.  The same is true for Ukraine, despite its checkered history, and the fact that parts of the country were once considered part of Poland, Russia or the Austro-Hungarian Empire.

Putin claims that Ukraine and its capital Kyiv are the heart of the Russian culture and historical identity, and the “Odessa Steps” is the sight of the famous scene in Serge Eisenstein’s film “Battleship Potemkin” about the 1905 revolution, and therefore should be unified with the motherland. That sounds very similar to the claim by right-wing and particularly messianic religious Israelis that Hebron and the Tomb of the Patriarchs are at the heart of the Jewish religious and national identity, and therefore should be part of a Greater Israel. A claim which totally denies the indigenous Palestinians, who are the overwhelming majority in Hebron, to their right to national self-determination.

A fundamental challenge to the “rule-based system”

Putin is saying that he wants to overthrow the post WWII “rule-based system”, and that nations should have the right to carry out their affairs in accordance with their national and historic interests. That claim, which sounds like something that former President Trump might support, which is perhaps why he is so enamored with the Russian President’s “genius” style of authoritarian leadership, is a fundamental challenge to the whole international rule-based order as encoded in International Humanitarian Law. If achieved, it would create an international system which would be governed by the “rule of jungle”, the survival of the strongest, with no respect for small countries’ rights.

It is also a fundamental challenge to the democratic systems which many countries aspire too, even if sometimes flawed.

Another way of looking at Ukraine-Russia is simply the struggle between democracy and authoritarianism.

Of course, Israeli Jews looking at Ukraine can’t totally ignore the historical context.   Ukrainians were among the most antisemitic people in Eastern Europe. My grandparents were among the hundreds of thousands of Russian-speaking Ukrainian Jews who fled from the antisemitic pogroms and the possibility of having to forcibly serve for 25 years in the Czar’s army to the safety of the North American shores. And unlike the claim of the Ukrainian Ambassador to Israel that Ukrainians helped save Jews during WWII, they notoriously cooperated with the Nazis and helped them murder countless Jews, with Babi Yar being just one example, while it was the Russians, the Red Army, which defeated the Nazis, liberated Auschwitz and provided the weapons via Czechoslovakia which enabled Israel to survive and win the war in 1948.

But that history doesn’t justify Putin’s distorted claim today that he is liberating the Ukrainians from a fascist regime. Although there are active reactionary right-wing extremist and antisemitic elements within Ukrainian society, the Russian people can only envy the nature of Ukrainian democracy, which perhaps poses a threat to Putin’s authoritarian rule. And as everyone knows, they have even elected a Jewish president.

Back in 1991, Arafat and the Palestinian leadership made a major mistake when they backed Saddam Hussein when he tried to conquer Kuwait. That angered the Gulf States and the entire 37 country coalition put together by President George H.W. Bush (42), undermined the PLO’s financial situation, and contributed to the necessity of changing the Palestinian position to supporting a two-state solution, eventually leading to the convening of the Madrid Conference and the beginning of what was known as the peace process.

This time, there appears to be a Palestinian grassroots sentiment supporting Russia against Ukraine, though President Abbas and the Palestinian leadership have preferred to remain neutral and not make any official statements on the conflict.  The grassroots support for Russia seems to be based on an anger at the United States as the leader of the anti-Russia coalition, which is perceived as providing Israel with unconditional support for its policies while not acting as a serious and meaningful honest broker to try to resolve the conflict. However, there are Palestinian voices that call for support for Ukraine’s right to self-determination and opposition to the Russian attempt to occupy the country, drawing a clear parallel with the Israeli occupation of Palestinian lands. Since the legitimate Palestinian demand for national self-determination in a state of their own is based on a respect for international law, beginning with countless UN resolutions, it would appear to be in their interest to oppose Putin’s attempt to undermine a “rule-based world”.

American hubris also played a part in contributing to the conflict. When the Soviet Union collapsed in 1991 creating a temporarily unipolar world with one super power, what Francis Fukuyama called “The End of History”, there were American mainstream and conservative experts like George Kennan, author of the Cold War containment policy, and Henry Kissinger, who warned that the West should not try to expand NATO to Russia’s borders since it would unnecessarily appear to be a threat to Russian sovereignty, given its history of foreign intervention in its affairs going back to the post-revolution period, of course culminating with Hitler’s attack on the Soviet Union which cost 27 million Russian lives. However, NATO’s expansion eastward into the Baltic countries, and Ukraine’s desire to join NATO which will probably never be realized, doesn’t justify Putin’s brutal attack against Ukrainian sovereignty and its people. Ukraine never threatened Russia, it is Russia which is trying to undermine Ukraine’s independent existence.

As for the Israeli position, it’s also very much a personal matter. There are about half a million Israelis of Ukrainian origin, and an equal number of Israelis of Russian origin. My cousin Alina has a mother and sister-in-law and their families suffering in Ukraine, and my friend Harriet has an 85 year old cousin with her family who live in the uncertainty of Kiev today. Israelis are very concerned about the fate of their relatives in the Jewish communities of both Ukraine and Russia. As for the Israeli leadership, so far Prime Minister Naftali Bennett and Foreign Minister Yair Lapid have played an official “bad cop” “good cop” routine, Bennett trying to sound neutral and avoiding condemning Russia, while Lapid clearly condemned the Russian invasion against a sovereign, independent state. And now Bennett has surprised everyone by using his apparent “neutrality” to become the first foreign leader to meet with Putin, with the knowledge of President Biden and the French and German leaders, while also maintaining ongoing communication with Ukrainian President Volodymyr Zelenskyy.

It’s hard to believe that the Israeli PM will be the one who will help find the end to the conflict, but he deserves an A for effort. As a religious Jew, he even was ready to defy religious custom to travel on the Sabbath, for “the sake of preserving human life”. Of course Israel also has interests, balancing between its dependence on American support and its desire not to run afoul of the Russians, who are the dominant power in neighboring Syria. There has been much internal criticism of the government for not taking a more clear-cut stand against the Russian invasion, which is understandably considered a moral blot on its policies. Israel however is not alone in this respect, since other countries, like India, and Iran (!) are also doing a delicate balancing act about Russia/Ukraine.

Ukrainian neutrality is the key

To me, the solution is clear. The Russian invasion should end, Ukraine should be declared a neutral state, which will belong to neither the Russian nor the Western bloc, though it should remain a democracy, and perhaps a role model for Russia as well. The only question is how to get there, and how many Ukrainian and Russian lives will be unnecessarily lost in the process.

About the Author
Hillel Schenker is Co-Editor of the Palestine-Israel Journal, and lives in Tel Aviv
Related Topics
Related Posts
Comments