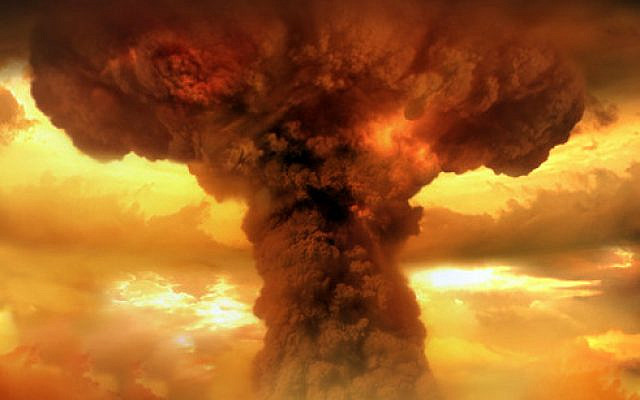 The barbarous Russian invasion of Ukraine under threats of nuclear escalation and engagement only serves to show us that Iran must not be allowed to get nuclear weapons. More generally, there is rising concern and fears about use of weapons of mass destruction between the superpowers or from other rogue states like North Korea and Iran. In truth, how long can we keep dancing around tens of thousands of nuclear warheads before someone actually is “mad” enough to use it?

Interestingly enough, “MAD” or Mutually Assured Destruction is the notion that a nuclear exchange would result in annihilation of both sides in a conflict, and this therefore is the military doctrine that we rely on to deter any party from actually using them. However, as we can imagine, not every head of state is necessarily a rational actor who can be depended on to stay conventional in war. For example, someone like Putin may prey on the perceived fear of the West and think that a first strike or their advanced weapons (like hypersonic missiles) and tactics give them an advantage to “come out ahead” in a nuclear exchange. Additionally, China is rapidly building its nuclear arsenal awaiting the day that it will take Taiwan (like Russia with Ukraine), and “I pity the fool” that thinks that they will try to get in their way. Similarly, in India and Pakistan, fighting over Kashmir or other territorial/regional ambitions could led them to come to nuclear dukes at any time as well. Further, North Korea’s Kim Jong-un may feel cornered and that he has no other way to break out of the U.S. sanctions box that is strangling his nation. And yet others like Iran’s Ayatollah Ali Khamenei may hold such radical Islamist beliefs that they are willing to sacrifice tens of millions of their own people to advance their Jihadi ambitions for a regional or global caliphate.

Historically, the Cold War between East and West hasn’t always been cold. In the Korean and Vietnam Wars in the 1950s-1970s, it got mighty hot in the surrogate wars playing out between the superpowers. Similarly, in the Cuban Missile Crisis and the Bay of Pigs, the U.S. and USSR were inching ever closer to a possible nuclear exchange. Now again, Russia is exercising free reign over the last 3 weeks already to invade and destroy Ukraine, a sovereign country of 44 million people, using the threat of nuclear weapons as cover for its brutal actions flattening cities and killing the population indiscriminately. Of course, NATO won’t lift a military finger (be it boots on the ground or a no-fly zone overhead) for fear of sparking a nuclear exchange with Russia…because Putin just may be crazy enough to enter the launch codes!

Learning from Russia’s use of its nuclear weapons umbrella to rampage and do whatever it wants to Ukraine, we must not let Iran get nuclear weapons and spread global Jihad, terrorism, havoc around the globe. Ironically, while Russia is raising their nuclear alert status and threatening anyone who dares interfere in their war on Ukraine, it looks like the U.S. and its allies are heading back to the failed Joint Comprehensive Plan of Action (JCPOA) deal with radical Shiite Iran (the #1 state sponsor of terror) that paves the way for them to eventually be a nuclear power in years ahead. Moreover, there is an understanding that this will spark a nuclear arms race in the Middle East and probably beyond: Saudi Arabia, Egypt, and Turkey, and other moderate Sunni Muslim nations, aren’t going to sit around and watch Iran threaten them with nukes!

Non-proliferation is a great concept, except that no one actually sticks to it, and the nuclear country “haves” use it as a bargaining tool with the nuclear country “wannabes” in exchange for strategic geopolitical alliances, trade, or votes at the United Nations. As an example, Israel, living in the dangerous neighborhood that they are in, fortunately got wind of this strategy early on, and they presumably received their nuclear know-how from France and incorporated this into their military toolkit as the ultimate deterrence to the Arab League trying to “wipe them off the face of the map.” Likewise, Abdul Kadeer Khan, the “father” of Pakistan’s nuclear bomb, supplied nuclear technology to North Korea and Iran, and like a game of telephone, North Korea then passed on nuclear secrets to Syria, upon which Israel preemptively destroyed the Syrian al-Kabir nuclear facility in 2007.

As we know, no military weapon was ever created that is not eventually used. And in fact, nukes already have been used when the U.S. dropped the atom bomb on Hiroshima and Nagasaki in August of 1945 killing 355,000 people. However, nuclear weapons these days are far more deadly, with the Tsar Bomba test conducted by the Soviet Union in 1961 that was 3,500 times stronger than what the U.S. used on Japan. Imagine for a moment, the incredible destructive power of thermonuclear weapons today or sarcastically-speaking, let’s not traumatize ourselves thinking or worrying about it and all die instead.

Israel is a small country that Former Iranian President Ali Akbar Hashemi Rafsanjani calls a “one bomb country” because that all it would take is potentially one nuclear bomb to destroy it. This is why Israel and the U.S. must not allow Iran to get the bomb. Any deal that is reactivated now with Iran is a “deal with the devil” and will not survive, because it doesn’t accomplish the goal of stopping Iran. JCPOA just kicks the can down the road until such time that action will be inevitable. At best JCPOA is only useful as a delaying tactic to stall for time while Israel and the U.S. build additional capacity to destroy Iran’s nukes or to try and counter them (such as with new laser weapons and missile defenses that Israel is advancing with). Unless there is a major regime change that significantly alters Iran’s dangerous radicalism, terror and militant ambitions, there will be no choice but military action to stop Iran.

As countries, responsible and rogue, pursue ever increasing and deadlier nuclear weapons (as well as deadly biological and chemical weapons), the chances grow for a unilateral bilateral, or multilateral exchange to take place. Whether from a brutal tyrant wanting to grow their base of corrupt power to a rampaging megalomaniac bent of world domination, a paranoid schizophrenic leader who feels that his “back is up against the wall,” or a radical theocratic crackhead convinced that G-d is on their side and wants them to kill all the infidels, we are inching ever closer to the day when nukes or other weapons of mass destruction will be out of the silo, port container, or suitcase. It is time to finally and fully acknowledge the growing threat especially from Iran and take the necessary preemptive action to stop them before they follow Russia’s dangerous playbook to even greater global malice and consequence. Only genuine preparation, strategic action and G-d’s deliverance will save us. Let us kook to the heavens for salvation rather than at ICBMs flying at warp speeds to our cities and people.