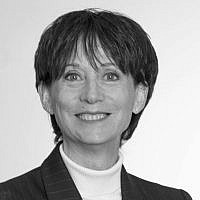 The Blogs
Suzie Navot
Apply for a Blog
Advertisement
Please note that the posts on The Blogs are contributed by third parties. The opinions, facts and any media content in them are presented solely by the authors, and neither The Times of Israel nor its partners assume any responsibility for them. Please contact us in case of abuse. In case of abuse,
Report this post.

Yesterday, the chair of the Judicial Appointments Committee, Justice Minister Gideon Sa’ar, announced that at its next meeting, he would submit a proposal to broadcast the hearings it holds for candidates for the Supreme Court bench.

First, some facts: The Judicial Appointments Committee (JAC) has nine members: three justices of the Supreme Court, two ministers—one of them always the Justice Minister, who serves ex officio as its chair—two Knesset members (one of them usually representing the parliamentary opposition), and two representatives of the Bar Association. Candidates for all judgeships are interviewed by a subcommittee. In the case of prospective Supreme Court justices, however, most members of the JAC take part in the subcommittee. Selection of a justice for the Supreme Court requires the support of seven of the nine members of the JAC.

As stated, Sa’ar is proposing that the interviews of prospective justices for the Supreme Court be broadcast live.

This is a fair and balanced idea that reflects the importance of transparency. We are not talking about a “hearing” in the sense that any member of the public would be able to question the candidate, but rather- just a direct broadcast of the proceedings of the subcommittee, which already take place. The only thing new here, is the live broadcast.

Publicizing the subcommittee’s meetings is preferable to various alternatives that have been suggested over the years, such as a public hearing in the Knesset. The live broadcasts would not change the current procedure, but only make it visible to the public.

Sa’ar’s idea will probably arouse objections. Some will argue that it doesn’t go far enough, and that the hearings should be conducted by our elected representatives in the Knesset. Others will say that the current arrangement should not be changed, since a public hearing might turn into a publicity stunt or expose the committee members to outside pressure. It is precisely these objections that demonstrate that the proposal is balanced and proportional. Incidentally, it has the support of Chief Justice Hayut, as part of her push for greater transparency in judicial proceedings.

Remember, too, that some Supreme Court hearings of cases with public significance are already being broadcast live. Recently the approval of the plea bargain agreement with Arye Deri by the Magistrate Court (not the Supreme Court) was broadcast as well.

In conclusion, this is a highly significant proposal. It aims to bolster public confidence in the process of the selection of judges by ensuring that it is public and transparent. If it succeeds, we will all benefit.

About the Author
Professor Suzie Navot is a professor of constitutional law and the vice president of the Israel Democracy Institute.
Related Topics
Related Posts
Comments