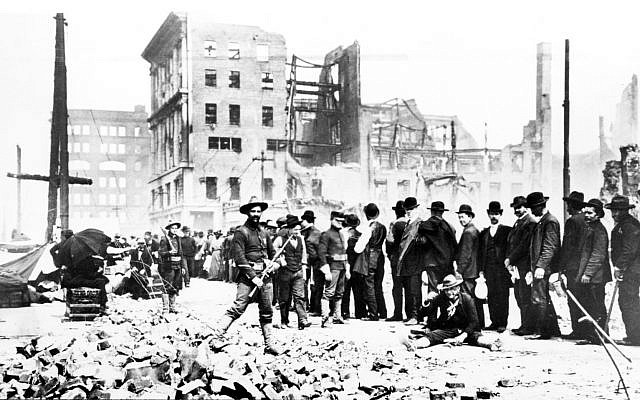 As powerful as the biological imperative to survival, there are invasive species which turn that will against itself—minute worms, for example, which infect crickets and impel them to drown themselves in water when an aquatic environment is necessary for the next generation of parasites.

Insofar as society at large is concerned, San Francisco’s empty shelves, skyrocketing inflation, and exploding crime wave are only symptoms of a community now likewise under attack from within, so disordered, weak and vulnerable as to be unable to prevent the disappearance of baby formula or keep the electricity on. No civilization, however, sleepwalking through the public lunacy of its mathematics being deemed “racist,” the confusion of displaying pregnant man emojis on its electronic devices, wondering aloud if its cities, states and capitals named after its own historic founders should be allowed to stand—no nation flirting incessantly with such self-hatred, collective harm and chaos can exist in a state like that, at least not for long.

Yet San Francisco has endured such a prolonged assault, savaged by a fake progressivism masquerading behind Haight-Ashbury smiles and peace signs to institute a reign of terror against shopkeepers, pedestrians, mass transit riders, homeowners, shoppers, school children, parents, tax-payers. There had to come a time when the citizenry’s self-preservation would be strong enough to overcome the avant-garde will to self-destruction and in the last few days the successful recall by a resounding margin of San Francisco’s public prosecutor, Chesa Boudin, indicates that the limits have indeed been reached in what will be tolerated in the Bay Area.

A rogue district attorney overtly and inexplicably on the side of defendants, unleashing a wave of criminality with the blessings, or at least indifference, of the municipal government upon terrorized, brow-beaten, ignored and insulted San Franciscans is simply beyond what a sane electorate will accept. Mr. Boudin, recalled and sacked by the voters his policies deemed so insignificant compared to lawbreakers, managed to affront 60% of those casting ballots on June 7, 2022 and in one of the most liberal jurisdictions in the United States, if not the world.

Law-abiding San Franciscans should breathe a collective sigh of relief, and not just because they and their children might safely walk down the street in what could now once again perhaps become a normal, safe, clean, major metropolis. Part and parcel of the chic politics which deems the tsunami of pedophilia currently overwhelming the culture not so much a crime but more a mental condition, is a ferocious and knee-jerk abhorrence for the foundational sanity upon which all society is built.

No one—liberal, moderate or conservative—wants to live in a city where street violence, shoplifting, homelessness, public drug addiction and drunkenness are out of control. No parent or guardian is going to continue pretending that legitimate police forces, serving San Francisco since 1849, are comprised of racist thugs and murderers, when it’s seen that they’ll pay for that absurdity with the safety of their own children.

That kind of anarchism and terror in sheep’s clothing—much like stealing isn’t stealing, and pretexts excusing crime, that public disorder is order—that sort of Orwellian double-speak has been turned down by the voters of San Francisco. Real liberals should be thrilled at the electoral outcome, since definitively separating themselves from collective suicide is something that no propaganda or slick advertising can provide, no matter the price tag.

And the Bay Area’s Jewish community—some quarter million and one of the largest in the United States—should breathe easier as well. California’s far-fringe “criminal justice reformers,” never having met an offender who wasn’t worthy of a suspended sentence and immediate release, have little in common with law-abiding, tax-paying, family-oriented Jewish-Americans. To the contrary, they are precisely the same supporters peddling antisemitic tropes condemning Jews and Israelis for having created an “apartheid state” in the Middle East. Even more disturbing though is that a breakdown of civil and judicial order has very often been the fertile ground for pogroms unleashed upon the Jewish people over the centuries, a truly overarching reason to hope that San Francisco’s reign of lawlessness is at an end.