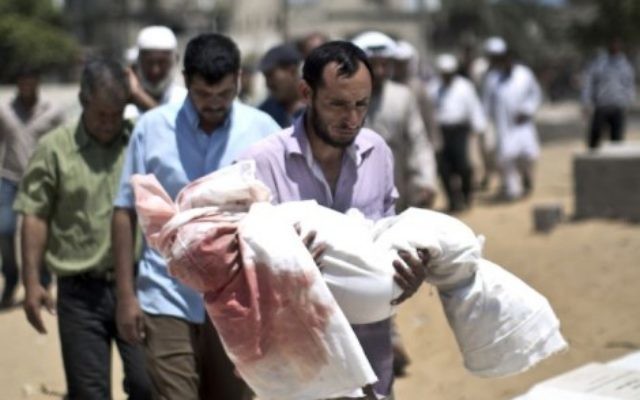 This blog entry does not represent the views of Rabbis For Human Rights, or anybody other than my myself. It goes beyond the mandate of what can be said by a human rights organization.

I have been evolving during this war. I am moving from cautious and dry pronouncements about suspicions that we have crossed red lines to feeling that the souls of hundreds of innocents are screaming at me from their graves.

The full enormity of how many bodies have been ripped apart by Israeli bombs, when their deaths were not necessary for our legitimate self defense, has finally penetrated the Israeli bubble that I live in. Painfully aware of grieving Israeli families, of friends and colleagues in bomb shelters, and of family members and children of RHR rabbis and staff fighting in Gaza, as well as believing in the right of self defense and having had to run for shelter a few times myself, it was convenient to coat my growing awareness of what we were doing in cerebral terms and balanced pronouncements.

It is not just the numbers. Numbers alone don’t prove responsibility. I have moved from suspecting that the red lines of what is permissible in the name of self defense had been crossed, to growing certainty, to the conclusion that those who have been giving the orders have to have known they have been making decisions leading to the deaths of innocents that cannot even be written off as essential to protect Israelis. When massive firepower killed 60-130 Palestinians to prevent the escape of Hamas gunmen with First Lieutenant Hadar Goldin z”l, they knew that Goldin either was already dead or would be killed by this “friendly fire.” B’Tselem has documented 72 incidents through August 4th in which 547 people, including 250 minors, 29 elderly and 129 women under the age of 60 died when residential homes were bombed.

Theoretically, there could be information not at our disposal that changes the picture radically. That is why it is important that Israel’s comptroller has announced an independent and transparent Israeli investigation. I would be incredibly thankful to be proved wrong, but I doubt that will happen. It is already clear that in many of these cases there was no immediate danger, such as firing from the house. It is that awful reality that makes the numbers a horrible black stain that can never be erased.

When Israeli citizens or soldiers were in immediate danger of death if we didn’t kill women, children and the elderly, there was a difficult judgment call to be made and we can blame Hamas for having forced us to make such choices. Most no doubt felt that preserving our own lives took priority. Perhaps some chose to uphold the Israeli army’s once hallowed principle of “purity of arms,” mandating that soldiers sacrifice their lives before harming innocents.

When we killed non-combatants to remove a potential, but non-immediate threat to Israelis, we caused unjustifiably disproportionate death. This clearly happened when we killed entire families because a Hamas operative was in the home. Only a few years ago one such action caused many pilots to refuse to serve and eventually the air force had to acknowledge it had made a mistake, even though we “successfully” killed an arch-terrorist. If, as it appears, we bombed some homes without knowledge of even a non-immediate threat, these were inexcusable deaths, tantamount to murder. These people are screaming at me.

Now, before Hamas and its supporters begin having a field day with what I have written, let me be clear. I continue to believe that Hamas is an immoral violator of both Israeli and Palestinian human rights, a disaster for the Palestinian people, and a disgrace to Islam. I know that Hamas has intentionally sacrificed its own citizens to lay the trap we have unfortunately fallen into. You will not find me at demonstrations placing all of the blame on Israel, and where there is no condemnation of Hamas rockets and tunnels. I have not been convinced by those who have mocked me for paying a shiva call to a fallen soldier and neighbor. If I was asked 49 days ago what to do, after days of Hamas rocket fire, after Israel’s warnings about what would happen if the rockets did not stop, and the international lack of will or inability to put the brakes on Hamas, I also would have reluctantly given the order for a military response, albeit a different response than the one we chose.

However, if I could turn back the clock, I would turn back the clock even further, I would turn the clock back to all those years in which territorial aspirations unrelated to real security concerns led us to thwart or ignore or talk to death every chance for a just and lasting peace. Our overwhelmingly greater power allowed us to influence the course of events in ways that Palestinians could not. With this power came responsibility, and we used it unwisely.

Most recently, I would have increased the flow of permitted goods into Gaza to needed levels, and ended the ban on exports to Israel and the West Bank. Instead, in June Israel re-imposed a ban on exports to the rest of the world. (I have heard from reliable sources that Hamas would have agreed to extend the June 2008 ceasefire had Israel fulfilled its commitment as part of that agreement to ease the blockade. Instead, we got renewed rocket fire and Cast Lead.) I would have agreed to a settlement freeze in order to keep the peace process alive, and would not have insisted on the PA recognizing Israel as a Jewish state or opposed the creation of a Palestinian unity government. I wouId not have rearrested Palestinians released as a part of the Shalit agreement without due cause. I am less sure of this, but I do not think that I would have exploited the search for our yeshiva students to crack down on Hamas infrastructure in the West Bank without further proof that the Hamas leadership was behind what one of their cells was planning.

None of these Israeli actions justified the barrage of Hamas rockets on Israel, but they likely were causes. The Hamas decision to start to use rockets and tunnels they had possessed for quite a while, but not used, was very likely triggered by our actions. If we had acted differently, but Hamas aggression started in any case, we would have been in no worse a situation. At least we would have been able to say that we had done everything in our power to avoid arriving at the lose-lose situation in which rockets were falling and we had to decide how to defend ourselves.

Ultimately, if we truly honor God’s Image in every human being, we must justify our actions both at the grave of four year old Daniel Tragerman z”l who was buried Sunday, and at the graves of four year olds Nidal Nawasreh (Home bombed July 9th), Hamzeh el-Hayah(Home bombed July 20th), Assam ‘Amar (July 20th), Rafah Abu-Jumah (July 20th), Tawfiq Abu-Jame'(July 20th), Bitul Abu-Jame’ (July 20th), Siraj Abu-Jame’ (July 20th), Bader Siyam (July 21st), Yasmin Abu-Yazji (July 21st) and so many others. Had we acted differently, over two thousand Gazans, our four dead civilians and sixty four of our soldiers would most likely still be alive. Other soldiers would be spared the searing memories that will haunt their dreams because of what they have seen. As we learn from the testimonies given to Breaking the Silence some of them will be haunted because of what they have done.

We cannot piece together and bring back to life those whose bodies have been ripped apart. We can honor their memory by taking steps now to prevent further senseless deaths. Over 2,000 Israeli and Palestinian souls are screaming for a radical rethinking of how we make decisions. Unfortunately, ceasefire agreement after ceasefire agreement has fallen through because war’s logic dictates that our leaders will not be able to explain our losses and sacrifices if we can’t demonstrate clear victory, without having “rewarded” the evil other.

But, I have a fantasy and a prayer. Monday night is Rosh Khodesh Elul, the beginning of our season of kheshbon nefesh (soul searching), and t’shuvah (Answering God’s Call, turning and returning to our highest selves.). It is a time when we traditionally drop the defenses that most of the year tell us “We’re OK,” because once a year we must take a hard look in the mirror if we are to have any chance of reaching our true potential. Rather than make excuses, justify and point our fingers at others, we look inward, say “I’m sorry,” work hard to change, and take concrete steps to fix what we have broken. We don’t just apologize, we forgive.

Could we do it? Could we Israelis and Palestinians reject war’s logic in favor of at least cautious reconciliation? Could our leaders decide to risk not holding on to power and popularity if granting something to “the other side” could build a better future for all? Would we honor them for doing so? It seems impossible, but this season has its logic as well, and gives power and strength to those who open themselves to its message. The Midrash tells us that God meets us on the way when we make the effort to go as far as we are able on our own.

For many years, the annual RHR vidui (Yom Kippur confession) has concluded with the line,

“And for the sin which we have sinned against You by thinking to ourselves and whispering in closed rooms that which we should have cried out loud, raising our voices as a shofar.”

This line of confession calls to me as it never has before. I should have been a shofar for the screaming souls, even though the safer path of muted statements seemed difficult enough, and aroused both Israeli and Palestinian approbation. All those souls were mere numbers and concepts to me, but the enormity of fighter jets raining death not required for self defense has now slammed into me with the force of one of those jets.

But Elul and the High Holy Days and the vidui are what we allow them to be. If we open ourselves to their power and their message, we can turn towards a better future.